When you need some variety in your online slots lineup, Invaders from the Planet Moolah can shake things up on the reels with a fun and highly unusual theme. We can safely say that we’ve never seen another alien cow-themed slot out there.

Originally released in 2013 by WMS (Williams Interactive), the game is starting to show some signs of age with washed out colors and basic animations. The land-based casino slot and this online version of Invaders From The Planet Moolah share the same cartoon style design, game specs, and features like cascading reels.

A herd of alien cows have descended to earth and are looking for some big wins at a country farm. These bovine aliens are hovering in their space ships, ready to zap winning combinations off the reels. They even suck their earth-bound cow counterparts into their spacecraft when the cows (stacked wild symbols) are part of winning combinations. Be sure to watch the expression on the cows’ faces for a good laugh.

You won’t find any playing card symbols on this farm. Other fun farm-themed symbols fill the reels, like dogs, grandmas, grandpas, cowgirls, farmers, barns, camper trailers, pickup trucks, chickens, milk cartons, mailboxes, and outhouses. All of these symbols are colorful cartoon caricatures that are playfully drawn and artfully animated for some laughs as well.

As refreshing as it is to play a game that isn’t filled with card symbols, it’s also a nice change to play a slot that awards free spins for consecutive wins on the cascading reels (instead of for scatter symbols). As the cascading wins add up, a meter on the side of the game screen tracks how many “Free Plays” (free spins) are awarded, with up to fifty free plays.

A mix of spaceship and ray gun sounds as well as mooing accompany the gameplay, which matches the theme but still sounds unexpected (and funny at times). Be warned that a very loud siren blasts when free plays are triggered. Then, a fun soundtrack starts playing to accompany the free plays reels that sounds like it was lifted from a cool retro alien movie. 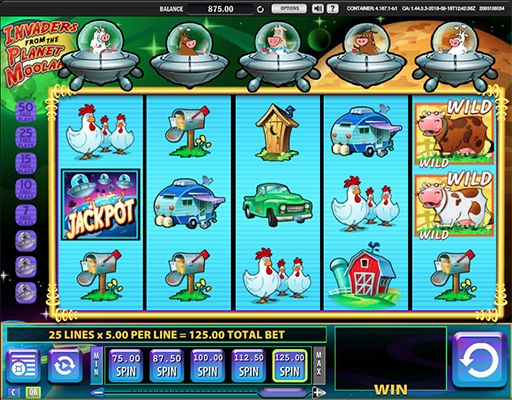 Five reels and three rows (5×3) of cascading symbols fall onto 25 lines of fun. You cannot change the number of active paylines in the game, but the 25 lines can be played with a wide range of bet values.

In Quick Bet mode, simply use the slider bar to choose the Total Bet value per spin. Quick Bet mode can be more intuitive and efficient, especially if you’re playing at higher bet levels.

The in-game paytable is dynamic, so it shifts as you change your bet to reflect the accurate payouts for the bet value you selected. The jackpot symbols are the highest paying symbol on the reels and pay out 7.50 on a minimum bet and 3,750.00 on a maximum bet for five matching symbols.

The highest paying regular (non-jackpot) symbols on the reels are the dog/grandpa/grandma/cowgirl/man symbols that are interchangeable all pay out 5.00 on a minimum bet and 2,500.00 on a maximum bet for five matching or mixed symbols.

The outhouse and the mailbox symbols are (of course) the lowest paying symbols on the reels, which pay out 0.05 on a minimum bet and 25.00 on a maximum bet for three matching symbols.

Top paytable values (for five-of-a-kind combinations with a maximum bet):

The autoplay function can be set up to run until you reach a maximum number of spins, number of minutes played, win amount, stake, or change to your account balance. The autoplay speed is comfortable, and all of the win lines and the total win on a spin are clearly displayed before the next spin starts.

The RTP (Return-To-Player) percentage for Invaders from the Planet Moolah is a solid 96.00%, which is average compared to other WMS games. 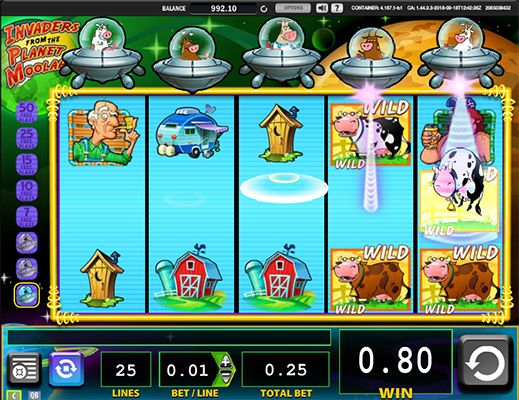 The value of the jackpot is determined by your active bet and the payout values for three, four, and five matching Jackpot symbols are published in the paytable with the other symbol payouts. There are no other local jackpot or progressive jackpot options in this game.

The main action and value in this game come from the cascading reels, which can land multiple new wins on a spin and trigger the free spins bonus game.

The “play” continues as new symbols continue to cascade onto the reels until no new winning combinations can be made. Consecutive wins on the cascading reels can trigger the free plays bonus game.

Earth-bound cows (white, brown, and black cows) are all wild symbols that can appear on the reels solo or stacked to fill an entire reel. Wild cow symbols substitute for all symbols and appear on reels two through five.

Free “plays” are awarded for hitting four or more consecutive wins (on the same play) on the cascading reels. 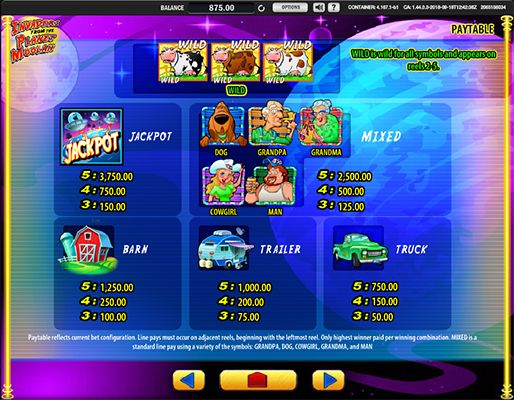 While the free plays are running, four or more consecutive cascade wins award additional free plays that are added to the remaining free plays. The winning combinations and payout values are the same on the free spins reels as the base game reels.

Fans of the Invaders from the Planet Moolah land-based casino slot are sure to love the online version of the game as the games are basically identical. The very usual theme with fun cartoon characters and animations can appeal to a wide range of players, and the simple gameplay makes it an accessible option for beginning to intermediate players.

We’re hard pressed to find another slot with an alien cow theme. WMS has released some spin-off games at land-based casinos, though, like Invaders Return from the Planet Moolah. This is a very similar game with up to 200 free spins, and the cow symbols can also award some new and special bonus features.

For online slots, although the theme of WMS’s Crystal Forest is completely different than Invaders from the Planet Moolah, the games are virtually identical in structure.

Crystal Forest’s mystical theme features the same cascading reels, the same free spins triggers and awards, the same jackpot structure and payout values, and the same payouts for winning combinations as Planet Moolah. The two games even share the same RTP of 96.00%. 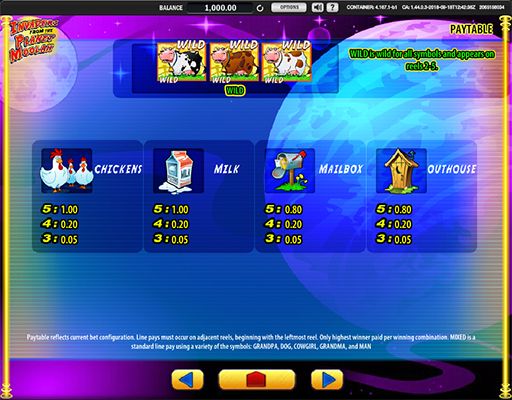 Free Spins Bonus Game – Up to 50 free spins are triggered, and retriggered, by consecutive wins on the cascading reels, instead of by scatter symbols.

Cascading Reels – Symbols cascade onto the reels to possibly create multiple new wins by replacing winning combinations until no new wins can be formed.

Stacked Wild Symbols – Wild cow symbols can randomly be stacked on any spin, filling up an entire reel (or multiple reels).

No Playing Card Symbols – There are lots of fun farm themed symbols on these reels with no playing card symbols in sight.

Easy To Play – The options and features are simple enough for anyone to play.

Limited Bonus Features – Few bonus features are offered outside of the cascading reels and free spins bonus game, and the free spins are exactly the same as the base game spins.

Small Jackpot – The jackpot symbols on the reels are essentially just the highest paying symbol on the reels. Don’t expect any huge jackpot wins here.