Buffalo, a popular slot game you can find on casino floors worldwide, is one of the flagship, classic games from Australian developer Aristocrat. After Buffalo was released in 2008, a variety of Buffalo spin-off games have graced casino floors, including Buffalo Deluxe, Buffalo Gold, Buffalo Grand, and Buffalo Diamond.

Aristocrat has also transformed the original game into this online slot that is an exact replica of the land-based version.

When stacked buffalo symbols “stampede” across the reels in the online game, they elicit a “Buffalo!” call like the one you may have heard echoing across casino floors.

Buffalos are the only stacked symbol on these reels, and chances are when you see one, you will see more. Hope for a herd, as buffalo are the most valuable symbols on the reels. Spins where stacked buffalo symbols land on multiple reels can pay out big.

Playing card symbols ranging from nines up to aces pay out 100 coins for five-of-a-kind combinations with a one-coin bet. As the lowest value symbol on the reels, three nines only pay out two credits.

Western sunset symbols are wild and also award multipliers during the free spins bonus game. Free spins are triggered by gold coin scatter symbols. These features depicting the American West are set against the backdrop of a quintessential sunset, much like the image on the wild symbols.

The five-reel, four-row (5×4) game configuration and the game interface remain the same throughout the game, and the free spins bonus rounds are played on essentially the same reels as the base game.

The sounds in the game are retro, lifted directly from the casino slot, which you may find to be either endearing or irritating. If you’re in the irritated camp, you thankfully always have the option of using the mute button. 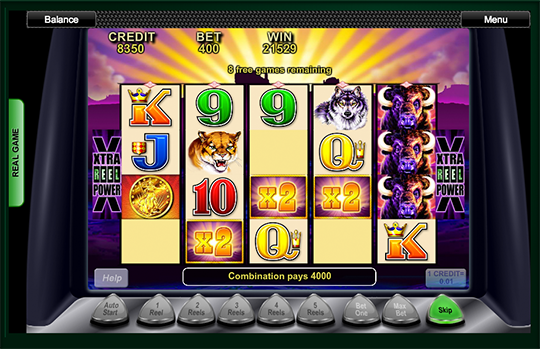 The Buffalo reels are driven by Aristocrat’s “XTRA Reel Power” concept, which operates on “ways to win” instead of individual paylines. This provides a unique twist compared to other retro slot games.

The paytable in the online free play version of Buffalo doesn’t specify what the different “ways to win” options are for different reel selections, but it is widely publicized that there are 1,024 ways to win when playing five reels in this game.

Choose how many reels you want to play with the following costs:

The paytable is static, representing payout values for bets made with one credit only. The paytable will not update as you change your stake, so you must multiply the paytable values by the number of credits you’re playing to calculate potential payouts at higher bet levels.

Don’t look for a standard auto spin feature with preset spin options. The autostart button in Buffalo starts the reels, and they won’t stop spinning until you press the button again. Spins go fast in terms of your balance status and the pace in between spins, so this feature may require some extra attention.

The return-to-player (RTP) percentage for this game is a solid 94.85%, which is slightly below average compared to other Aristocrat games. 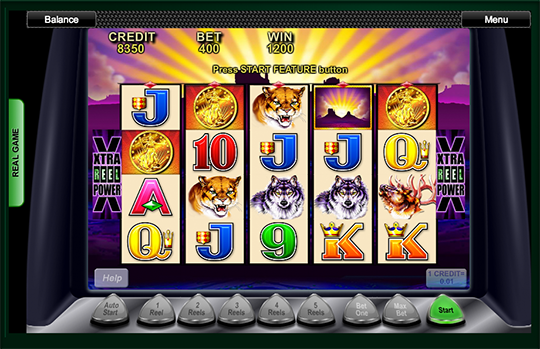 Some of the titles in Aristocrat’s line of Buffalo-themed, land-based casino slot games (like Buffalo Grand) boast progressive jackpots. However, the original Buffalo casino slot game and this online version of Buffalo do not offer any jackpot options.

During the free spins, wild symbols (sunset symbols) award multipliers of either 2x or 3x and can be added together (up to a total multiplier of 27x). You can retrigger the free games feature. 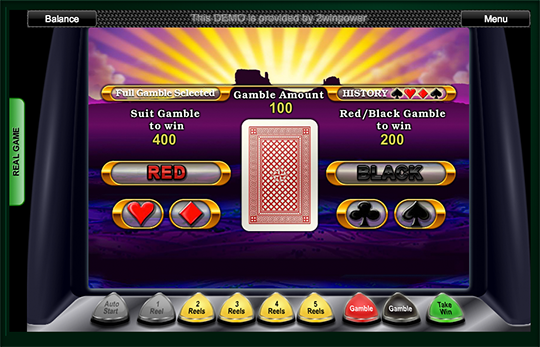 Buffalo is such a popular casino slot game worldwide that fans of the casino game are sure to love this authentic online version. This slot is also a good match for retro-slots fans, beginner players, and penny-slots players.

The original Buffalo casino slot is the only game in the Buffalo series that Aristocrat has released in an online version to date.

Examples of other Aristocrat slots featuring animal themes include 50 Lions, a game set in the African savannah, and Big Red, a game set in the Australian Outback. The reels in both of these games are filled with animal symbols and free spins like Buffalo, but both games pay via individual paylines instead of Aristocrat’s Xtra Reel Power.

We haven’t found a free play version of other Aristocrat slots with Xtra Reel Power, but games like Choy Sun Dua feature “Reel Power” with 243 ways to win on five reels, instead of the 1,024 ways to win on Buffalo’s reels. Choy Sun Dua also offers a choice of different free spins game options, whereas Buffalo awards a specific number of free spins.

Free spins bonus game: This is where the action is at, and the free spins can be lucrative thanks to the generous free spins awards, wild multipliers on the reels, and retrigger options.

Authentic casino slot: You can experience the exact same game online as in the casinos.

Low stakes options: This game is perfect for penny-slots players.

Easy to play: The game interface and features are simple enough for beginner players. 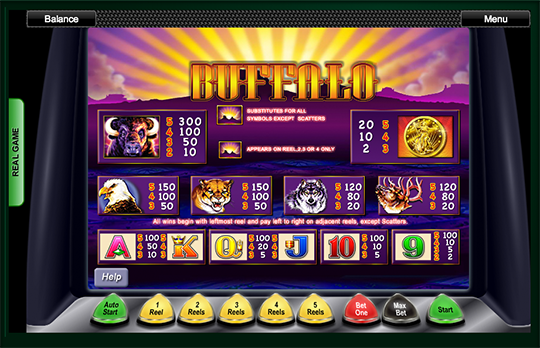 No jackpots: A lack of a jackpot is authentic to the original game, but limiting for jackpot players.

Limited bonuses: Gameplay in the base game can be monotonous due to sparse bonus features.

Basic graphics: The retro design and animations are not as advanced as more current slots.

Autoplay: You can’t select a maximum number of auto spins. The auto spins also run fast, with the win counter often getting interrupted by the next spin.