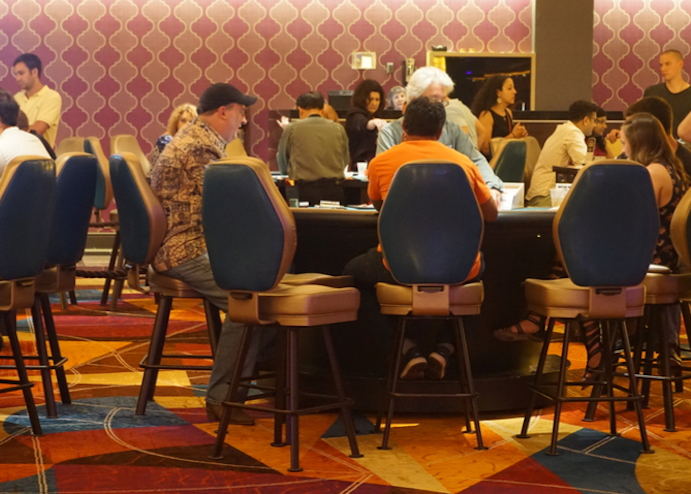 The once-vaunted poker room at the Tropicana Casino & Resort Atlantic City isn’t what it used to be. Still, the Trop Poker Club is an appealing destination for Atlantic City poker players—based on its solid, ongoing promotions.

For decades, the Trop competed for the title of Atlantic City’s top poker room with the Trump Taj Mahal. This rivalry corresponded with Atlantic City’s status as the center of the poker universe on the East Coast. Both rooms have now closed.

Most of the poker business in Atlantic City moved over to the Borgata Hotel Casino & Spa after it opened in 2003. The Taj closed up shop last year in the middle of a labor dispute. It has since been sold to Hard Rock International, which is in the middle of a $500 million renovation and rebranding.

The 42-table room at Tropicana was cut down to size and shipped off to a new location: near the property’s Boogie Nights dance club.

At 18 tables, the Trop’s room is now one of the smallest in Atlantic City, but its various promotions remain strong.

The Trop Poker Club runs a High Hand of the Hour promotion, every hour of every day. Players can win up to $2,500 per hour through the promotion. Both cards must play, and a minimum qualifying hand of aces full of kings must be met before any payouts will be made. However, there is no minimum pot size or showdown required.

Additionally, the poker room runs a lucrative Bonus Cash cashback promotion. Players who play live poker this month will get paid next month as a part of the promotion:

Bonus Cash can be redeemed beginning on the second Wednesday of the month. However, players must collect the Bonus Cash before the end of the month or it will be forfeited.

The Trop also notably runs a High Hand of the Day promotion. This sees the room giving away $100 in Comp Dollars for the day’s top hand. The minimum qualifying hand is quad deuces. Players must use both hole cards although the hand does not have to go to show down.

Player do not have to be present at the end of the day to claim the prize. The Comp Dollars will be automatically uploaded into players’ Tropicana Advantage Card accounts.

Additionally, the room runs a promotion offering a complimentary room to anyone who makes a royal flush. Players only need to use one hole card to qualify for this promotion. However, the room can only be redeemed for one night, Sunday through Thursday, excluding holidays.

Finally, the Trop Poker Club also runs a Bad Beat Jackpot. Through this promotion, it claims to have paid out more than $7.7 million to players since 2008.