A classic WMS (Williams Interactive) slot game, Zeus has been a long-time player favorite, both at land-based casinos and online. The gameplay experience itself is going back to basics, with very simple reels and free spins bonus.

This retro game may not look like much as it is showing some serious signs of age with very dated graphics and animations, but we found some value when we were playing it for this review.

As Zeus was the king of the Greek gods, he’s also king of these reels. The Zeus symbol is the highest paying symbol on the reels, and it is the only symbol that is stacked to fill an entire reel (or reels). As the god of thunder, Zeus’s thunderbolt symbols trigger the free spins reels with a crack of thunder, and Zeus’s temple symbols are wild.

The reels are also filled with other symbols from Greek mythology like the infamous Pegasus, boats, helmets, harps, vases, gold coins, silver coins, and wreaths. You will only find symbols befitting of the gods on these reels, with no playing card symbols in sight.

The background design is as retro as the reels that have only a slight Grecian border. A badly rendered version of Zeus’s temple adorned with lightning bolts sits on top of the reels next to Zeus’s name in Greek font.

The reel sounds are typical WMS sounds, but the crack of thunder when the free spins game is triggered adds a nice touch. Classic movie-style music underscores the free spins, but otherwise, the free spins reels are exactly the same as in the base game. 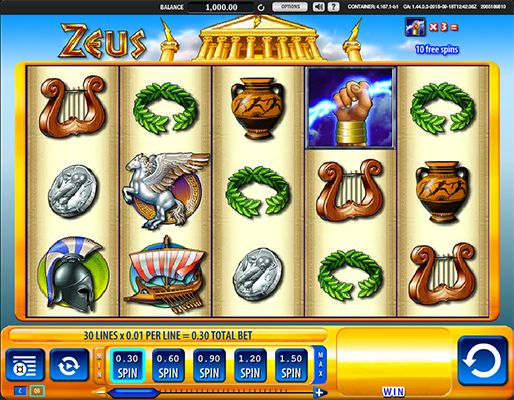 The 30 lines in Zeus are spread across five reels and three rows (5×3 configuration). The number of active lines can’t be changed, but you can change your bet per line ranging from 0.01 up to 5.00 per line on those 30 lines.

You can change your line bet by one cent increments (0.01) using the arrows in the “Classic” view mode or change your total bet using the slider bar to select between 0.30 and 150.00 per spin in “Quick Bet” view.

The paytable automatically updates as you change your stake to display the payout values at your current stake. The Zeus symbols are the highest paying symbols on the reels; five matching Zeus symbols pay out between 5.00 with a minimum bet and 2,500.00 with a maximum bet.

The payouts on all of the symbols in this game are relatively high, with even the lowest value symbol paying out 750.00 for five-of-a-kind.

Autoplay options can be customized to automatically stop once you reach a maximum number of spins, number of minutes played, win amount, stake, or change to your account balance.

The RTP (Return-To-Player) percentage for Zeus is a solid 95.97%, which is average compared to other WMS games. 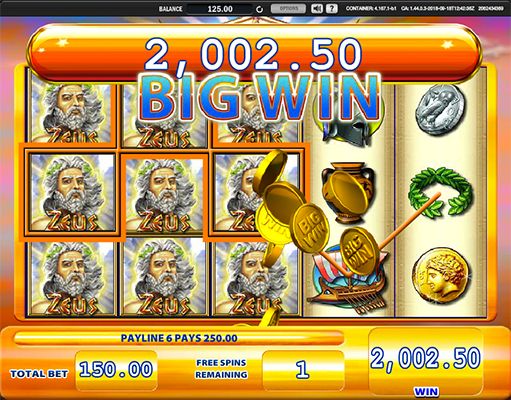 Wild symbols are emblazoned with the word “Wild” across Zeus’s temple. Wild symbols substitute for all symbols except the Feature symbol.

Zeus symbols, the highest paying symbol on the reels, are stacked symbols that cover an entire reel. Zeus symbols are on all five reels, making it possible to hit multiple Zeus combinations for some big wins when stacked Zeus symbols land on multiple reels.

During the free spins, getting at least three scatter symbols on the reels awards additional free spins that are added to the remaining free spins. Winning combinations and payout values are the same in both the free spins game and the base game.

This slot game is ideal for fans of the WMS Zeus slot found at land-based casinos as the two versions of the game are identical. It should also appeal to players who prefer retro slots or want to get back to the basics with straight reel play without all of the bells and whistles found in more cutting edge games.

The simple gameplay and decent win potential could also appeal to beginning to intermediate players.

For example, Zeus 1000 features two reels – a main reel and a colossal reel – with 100 combined lines a spin and features like transferring wilds between the two sets of reels. Zeus III also features a non-traditional layout with a sideways pyramid configuration with 192 lines. Zeus God of Thunder features three different Wheel of Fortune mini-games and five different jackpots. 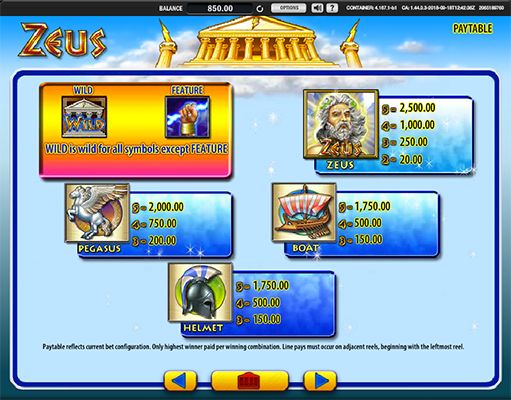 No Playing Card Symbols – The reels are filled with Zeus and Greek god-themed symbols, with no playing card symbols or card suit symbols in sight.

Easy To Play – This is one of the easiest games that we’ve played – it’s straightforward enough for anyone to play.

Limited Bonus Features – Wild symbols, stacked symbols, and the free spins bonus game are the only bonus features in this game.

Monotonous Game Play – With so few features on the reels and free spins that are exactly the same as the base game spins, the game play can get monotonous pretty quickly.