Wolves are depicted as dangerous and predatory, but if you want to win big playing Wolf Run, you’ll have to shelve your fears and enter a forest packed with them. In fact, to unlock the payouts and enjoy the biggest rewards, you must run into as many wolves as possible.

Wolf Run is a five-by-three reel slot game by IGT. You need to place a minimum $0.40 bet ($0.01 per line) to start. The 40-payline game can be played on all computing devices without downloading any software.

The game’s sounds match the theme perfectly as occasional howls can be heard throughout the game. A thrilling sound is also produced every time you click on the spin button or get a winning combination. In regards to color, IGT utilized purple, green, and blue on the reels.

Other notable visuals include the game’s title, which is creatively done. The letter “o” in the title is replaced by a wolf’s paw.

Wolf Run doesn’t have a progressive jackpot, but big wins are possible given the $120,000 maximum payout. However, like most slots, your chances of enjoying regular small gains are higher than getting a high payout. 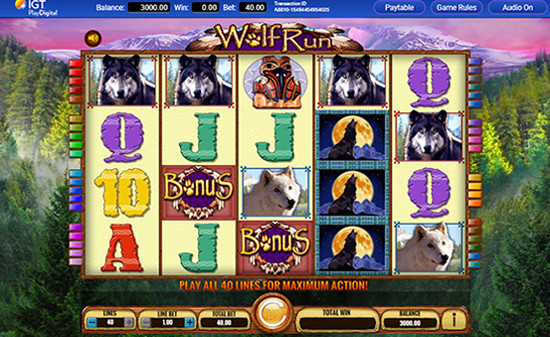 IGT set out to create an online replica of their popular land-based casino slot game, including its usual reels, card symbols, and wild and scatter symbols. Additional features of the game include:

In Wolf Run, the howling wolf is the wild symbol. All wilds get stacked four symbols high across all reels during the base game. You can get one to four wilds at any time during play. When you land wilds with other wilds, you can trigger some serious base game wins. You’ll know when you land wilds since the wolf emits a distinctive howl.

A free spins round is triggered when you hit three wolf paw symbols across the second, third, and fourth reels.

Free spins can be retriggered to land big wins. Although this is possible, it isn’t easy. You can retrigger a maximum of 255 free spins from the five free initial spins, or once or twice in a bonus round if you are lucky. Free spins have a decent payout, especially when you land extra wilds.

Wolf Run has a scatter symbol – the wolf paw. To retrigger spins, you must land three or more scatter symbols across reels in a free spins round. The scatter is only present in the center reels (reels two, three, and four).

Wolf Run already has a vast following offline. The slot game happens to be among the most popular land-based slots of all time globally. If you already like the land-based version, you’ll love the online version by IGT.

Furthermore, if you enjoy Native American or wild-themed slots, you will be in for a treat with Wolf Run. The game is also suitable for a wide range of players, from low-stakes players to high rollers, given you can make line bets with as little as $0.01.

Other similar games from IGT 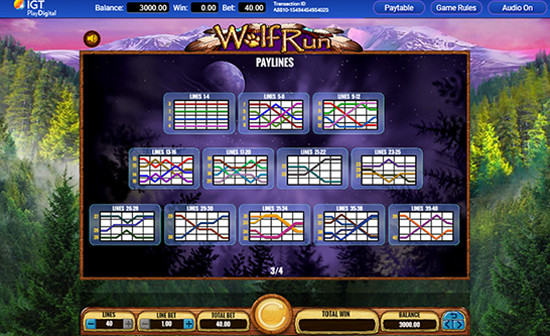 Simple gameplay: If you like getting right into the gameplay, Wolf Run is a highly recommendable slot game. Most slots players are familiar with it, and the game’s simplicity is one of its most notable upsides among enthusiasts.

The game includes simple standard features easily accessible at the click of the button, whether you are playing the game on a PC or mobile device. What’s more, the game doesn’t have complicated rules.

Incredible bonus features: Wolf Run also stands out for its unique bonus features, like stacked wilds, which aren’t present in all slots. Stacked wilds are responsible for most, if not all, winnings in the base game.

Surprisingly, it’s easier to land stacked wilds on Wolf Run if you play the game for a while. Wolf Run offers all the bonus features you would expect in a popular slot game today, from free spins that can be retriggered to wilds and scatters.

Universal appeal: Wolf Run has a universal appeal, and there is something in the game for every kind of player. If you don’t fancy the theme, you’ll love that the wager limits cater to small-stakes players as well as high rollers.

You are also bound to love the frequency of small wins. The land-based Wolf Run version has been popular for a reason. IGT’s Wolf Run is a perfect replica.

Decent odds: Your odds of winning something while playing Wolf Run are decent. The house gets to keep approximately 5% of all deposits. Although the RTP varies depending on factors like stakes, the frequency of bonus features is commendable. 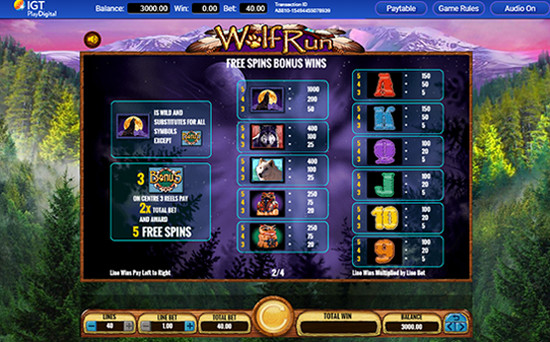 Replica of the land-based game: If you don’t like the land-based Wolf Run, you won’t like IGT’s online version. IGT hasn’t changed anything. This may have been intentional given the success of the land-based version; however, some simple tweaks would have gone a long way. IGT scores a zero on innovation with this game.

Oversimplified: If you hate simple slots with straightforward gameplay, Wolf Run isn’t for you. It takes seconds to familiarize yourself with everything about this game, something which may cause monotony. Given slots can already be monotonous, simplicity may not be a good thing.

No multipliers: Wolf Run has notable features but lacks a staple slots feature – multipliers. Because slots that are designed to offer many wins do so in small amounts, multipliers come a long way in boosting your gains.

Variable RTP: The variable RTP of 92.5% to 94.98% favors higher-stakes players. A fixed RTP is generally better as all players get the same odds regardless of stakes.

Few big wins: Wolf Run has a vast global appeal online and offline, but the game may not be good for you if you are interested in big money prizes. Wolf Run Megajackpots would be a better bet, where big wins are easier to get.