British-founded developers IGT have been supplying slots for US physical venues and online casinos for over 20 years.

In many ways, Wild Wolf is typical of their simpler slot games.

Wild Wolf is based around the titular wolves, with a dash of Native American mysticism added in.

The whole experience is quite relaxing for a slot and worked out as a nice choice of theme overall.

There are two sets of icons in Wild Wolf. One is for the standard reels and for the bonus free spins game, while the second is essentially the same but with the images flipped and colored differently.

There are the standard slots icons of J, K, 9 and 10. On top of that, you get lupine-themed icons such as:

Wild Wolf’s backing music is a sort of Brian-Eno-style spacy, ambient track. It’s not bad at all, and it’s easily blended into the background while spinning the reels.

Other sounds included traditional style drums and clicks as well as howling wolves. As slot games go, this one is rather atmospheric – although this might come down to personal taste. 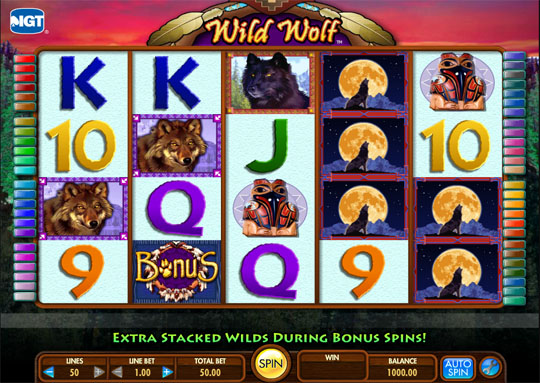 This means the minimum bet starts at $0.01, for those willing to play with only one line. Penny slots players will be happy with that.

The maximum bet can still be quite high. With all fifty lines, the top bet per line is $1, making an expected maximum wager of $50.

A slightly higher option is available for players who experiment with the payline numbers.

At 30 paylines, the maximum per line bet is upped to $3. This means the true highest wager is $90.

This isn’t the highest you’ll find in online slots. It is a reasonable amount, nonetheless.

The highest payout possible on a standard symbol is 500x your per-line bet. That makes for a maximum of $1500 winnable on one line. This doesn’t count Wilds, and many lines can be won on one spin.

The Return-to-Player, or RTP, on Wild Wolf is 92.99 – 94.97%. Even on the higher end, this is relatively low compared to many slot games available online.

There are none to be found here.

Considering today’s modern slot marketplace, not having any kind of designated jackpot hurts Wild Wolf’s chances of staying at the head of the pack. 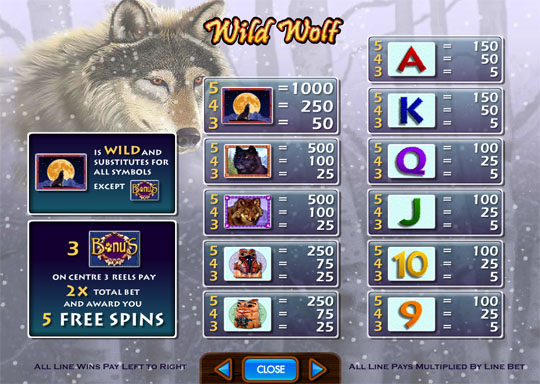 Wild Wolf features one Wild icon, one scatter, and one bonus round. That’s not an extensive set of features, although some players may find the simplicity appealing.

There’s only one Wild symbol in this game – two if you count the same symbol mirrored on the bonus reels.

They are standard Wild symbols – they replace any other symbol to form a winning line.

Sometimes Wild symbols can appear in a stack on the main reels. This means they take up one whole reel, which can lead to multiple payline wins.

Wild Symbols are also the highest paying symbols when they form a winning line by themselves. They go as follows:

That makes for a maximum bet prize of $3000 on any one line.

Wild Wolf includes only one scatter – a Bonus symbol with a furry pawprint on it.

Pull three of these in the central three reels on which they appear, and you’ll unlock the bonus round. You’ll get 2x your maximum bet as well.

It doesn’t matter where the scatter symbols appear or whether they make a payline. You still get the bonus and the prize. 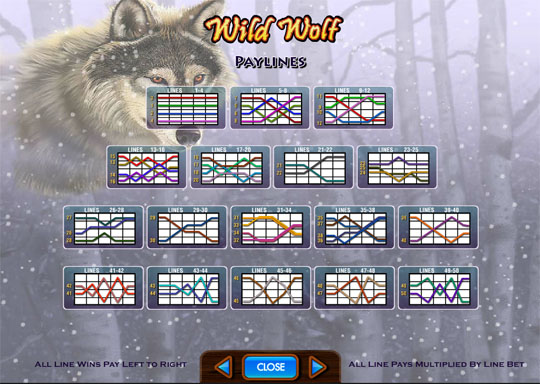 Wild Wolf’s bonus round is a free spins game on a separate but not entirely different set of reels.

You initially receive five free spins on these color-changed reels. Should you pull three more Bonus symbols during your free spins, you’ll get 2x your overall bet and another five free spins to add to the round.

Each spin is made with the same maximum wager you had down on the spin that triggered the bonus.

Who is Wild Wolf ideal for?

Penny slots players will enjoy this game as bets can be adjusted in a wide range of sizes.

Beginner or new slots fans may also find appeal in the simplicity of this IGT title.

The whole theme is quite relaxing too, which could be an attraction for players who dislike the over-the-top and busy gameplay of many slots.

Wolves are a popular and classic choice of theme for slot developers, so fans of the wild canines may find many titles to their liking online.

Engaging Theme: This may come down to personal taste, but we enjoyed the aesthetics and sound design on Wild Wolf. Something about them was absorbing and relaxing.

Overall, a surprisingly fun take on a fairly common theme. 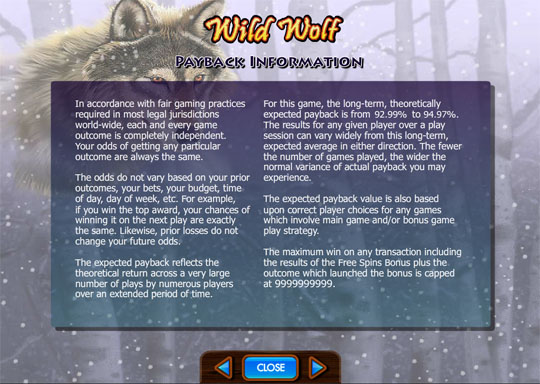 Fully Customizable Paylines: This is always a highly useful tool for players who like their own custom bet sizes. With 50 paylines and a range of line-bets to play with, bettors should be able to wager exactly the way they want on Wild Wolf.

No Jackpots: Without a big-money designated prize and a fairly low RTP, Wild Wolf certainly doesn’t feel like the biggest paying game on the market right now.

Not Too Many Features: With only one bonus round and one scatter, Wild Wolf doesn’t have a huge amount of depth to it.

The stacked Wilds are a decent addition. However, compared to games offering those on top of other Wild features and more variety in the bonus rounds, Wild Wolf might not have enough to keep up.