International Gaming Technology first debuted a Wheel of Fortune machine at US venues in 1996, and it has been a mainstay of casino floors ever since.

With their central spinning mechanical wheels and a popular license, it’s not hard to see why this series has been such a hit for the London-based slot developer.

Wheel of Fortune: On Tour comes with a unique road-trip themed mechanic that sees players collecting fuel in order to unlock a wide variety of bonus games and features as the game progresses.

Wheel of Fortune: On Tour is based around a good old American road trip.

Icons include Winnebagos, a Hollywood walk of fame star, the Liberty Bell, car keys, the Mount Rushmore heads, and more.

All the animations are smoothly done here, with loads of little extras such as the wheels of the Wild icon actually spinning on a winning line. Other examples include the Wheel of Fortune bus driving across the reels to scatter extra wilds, or the revving sound when you level up the bonus meter after collecting enough fuel.

This game even comes equipped with an interactive map during the bonus rounds. Players can send their Wheel of Fortune bus further along the trail by pulling bonus symbols on the main reels.

Add all that together, and players might just have one of the best-looking entries in the Wheel of Fortune slots series.

It also has a rip-roaring rock soundtrack that, while not officially licensed, blows a lot of other slot titles out of the water. Complete with kickin’ solos, it fits the road trip theme of the game nicely.

However, as with almost all slot music, the single track does get repetitive during hour-long sessions. 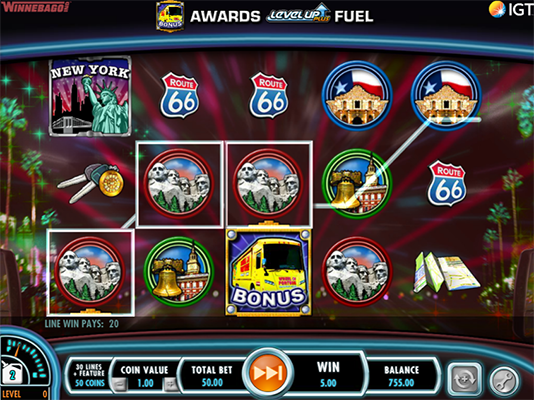 Wheel of Fortune: On Tour is a 30-payline, five-reel game. Unfortunately, you can’t adjust how many lines you bet on this game, nor is it easy to see the lines overlaid on top of the reels.

This is always a little frustrating in a high-payline game as it can lead to some unexpected wins, or some expected wins that don’t actually happen.

You also have a to pay a little extra on your main bet, which means it doesn’t always match up perfectly with per line value.

This isn’t a great range for an IGT online slot and may put off even the lower end of high-rolling players. However, with massive multipliers on the bonus round, we can see why they chose to limit the highest bet.

The Return-to-Player (RTP) on this game is 92.5 – 95.6%. That’s quite high variance, meaning Wheel of Fortune: On Tour can be at the higher or lower end of the IGT slots spectrum.

There’s no jackpot in this game. With all the extra bonuses available, this was a big omission.

However, it can’t stand up to the jackpots on many IGT slots – let alone the big-money million-dollar progressives.

Wheel of Fortune: On Tour may not offer a jackpot, but it certainly includes a wealth of extra features and bonus rounds. No fewer than six different kinds of bonus are available, all through the main bonus round: The Wheel of Fortune itself.

This is an enviable selection, although we must say that during our hour or so of gameplay, we didn’t think the bonus round appeared as often as it would on other slots.

There’s only one Wild symbol in Wheel of Fortune: On Tour. It is helpfully labeled WILD.

It acts as a standard Wild symbol, in that it replaces any other symbol to make a winning line. Pull three or more of them, though, and they will award you a prize:

This gives a maximum win of $450 on the Wild symbols as they are also the highest paying symbol.

As an additional feature, the Wheel of Fortune tour bus will sometimes zoom across the reels before a spin and drop one to four extra Wild symbols onto the reels.

This will only occur on a round where a bonus symbol isn’t pulled on the first reel. 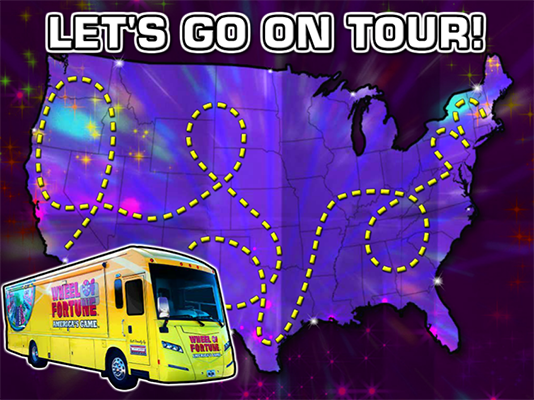 The only scatter symbol here is the Bonus Bus. Pull three of these in one spin, no matter the position, and you’ll unlock a shot at the eponymous Wheel of Fortune bonus round.

However, there is a unique mechanic added here – every time you get a non-triggering bonus, you fill up some fuel in the gauge on the bottom left corner of the screen.

Every ten fuels collected move the bus an extra space along the road-trip map of the USA that pops up at the start of the bonus round.

Each stop you move further along the road trip map changes some of the wedges on the bonus wheel to a new bonus game.

Get to level 7 of the fuel meter, and you’ll guarantee yourself a go at one of these new bonus games as well as another spin of the wheel when you next trigger the bonus.

The main bonus round here is a singular spin of the Wheel of Fortune. Prizes range from $2.50 to $1000, with a random multiplier between 2x and 10x also added.

As previously explained, gathering fuel points on the main reels changes segments of the wheel to extra bonus rounds. The five possible rounds are:

Fans of the long-running game show will definitely enjoy Wheel of Fortune: On Tour.

The Wheel of Fortune series is incredibly popular among casino players too, so anyone who’s played other titles in that series might also enjoy this.

Just a few of IGT’s other Wheel of Fortune games include:

Clearly, anyone who’s a fan of the multicolored spinning wheel will be satisfied with IGT’s selection. 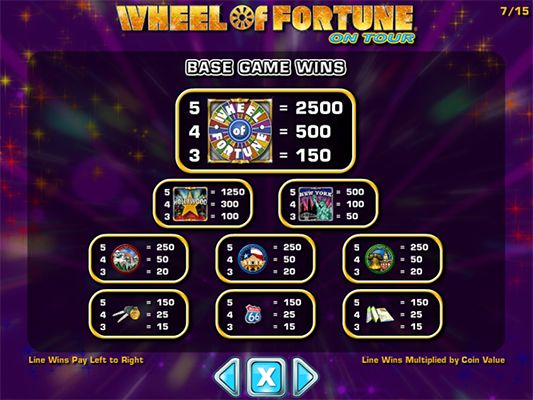 Loads of Bonus Rounds: Wheel of Fortune: On Tour features six different games or variations thereof. That’s a lot to experience, and it will take anyone quite a while to see everything this title offers.

Popular Series License: Wheel of Fortune has been running on televisions across America since 1975, so it must still have a dedicated fan base. Anyone who watched this series as a child or still enjoys it today should have fun with this title.

Great Visuals and Music: This game is aesthetically pleasing. Little touches such as the bonus wild scatter accompanied by the Wheel of Fortune van or the road-trip map that pops up during the bonus round make this title a visually exciting to play.

Shout out to the music as well, which beats the generic soundtracks of most slots.

Low Maximum Bet: $15 is a not a big maximum bet for an online slot from IGT by any means. Considering many of their other games go up as high as several hundred per spin, high-rolling players may be disappointed here.

No Jackpot: Top-tier modern slots titles really want a signposted, preferably even a fixed prize, jackpot. Wheel of Fortune: On Tour is definitely lacking in this regard.

Highly Variable: We noted that the bonus seemed to appear less often than on some other games, and this suspicion was confirmed when we saw the highly variable RTP. Not what most players want from a slot.