IGT has been developing slots for US casinos for nearly 20 years, and Triple and Double Diamond should be familiar names to most physical casino customers.

With only nine lines and three reels to worry about, Triple Diamond feels vintage compared to today’s modern slots.

However, this could be seen as a good thing by some fans who prefer simpler titles that are less busy with multiple scatters and bonus rounds.

If you’ve been to a physical casino slots floor before, you know the deal with this one. Vintage Americana abounds for a timeless theme.

The symbols here should be familiar to most slot fans, especially older players. There are only six symbols in the whole game, including scatters and bonus symbols. They are:

We expected a bell symbol, but other than that, there’s no room to complain.

The soundtrack is serviceable but underwhelming. It sounds like a budget 8-bit gaming system soundtrack from the early 90s, which is exactly the theme IGT was going for, so it’s hard to pull them up on it.

We muted the soundtrack after a few minutes and imagine most other players will, too. 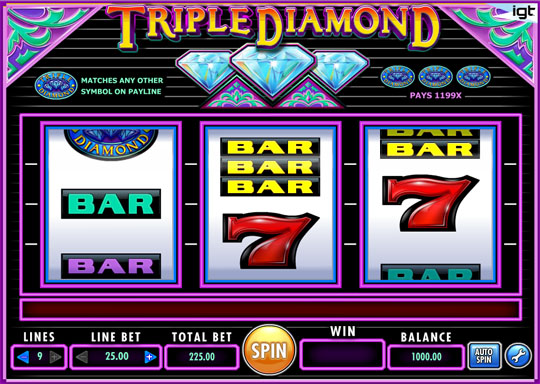 With only nine lines and three reels, it shouldn’t take too long for most players to pick up on Triple Diamond’s structure.
The maximum bet is $9 a spin or $1 per line. The lowest is a penny per line or $0.09 a spin.

This is a low bet range that won’t hold a candle to the $300-plus-per-spin games available at casinos or online. However, it is perfectly reasonable for an old-school slot of this style and should suit low-rolling players.

Being able to customize and easily see both your paylines and bet per line is also a nice feature that is often missing from more modern titles.

The Return-to-Player, or RTP, of Triple Diamond is 95.07%. This is in the higher mid-tier of IGT slots. Given how old the game is, this RTP is impressive.

Triple Diamond does not feature a jackpot.

The maximum prize, which can be won by pulling three Triple Diamonds on one payline, offers 1199x your bet. At the maximum bet, that’s $10,791.

That’s a decent prize, but it’s nowhere near the fixed big-money jackpots of many of today’s biggest slot games.

Triple Diamond only features two scatter symbols and no bonus rounds. Both of those symbols can also be considered a Wild.

This is not very extensive compared to almost any modern-day slot. On the other hand, this simplicity can be part of the appeal for some fans. 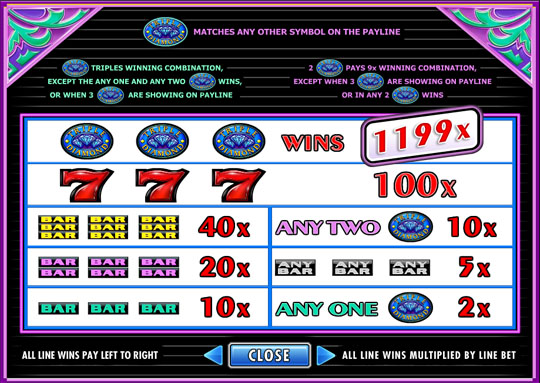 The Triple Diamond symbol counts as a Wild in that it replaces any of the other symbols in a winning payline. It offers 2x your bet if one is pulled and 10x if you hit two. Pull all three to win the big prize of 1199x your bet.

The other scatter symbol on this title is the Any Bar symbol. Pull this is a payline, and it will replace any of the other Bar colors to form a winning line.

There’s no bonus round in Triple Diamond – no free spins, pick ‘em rounds, or anything else. Players will need to be content with spinning the main reels only.

However, to keep the RTP up to modern standards, the rest of the payouts are (slightly) more frequent.

Those who enjoy the nostalgia of old-school three-reel slots or who are looking for some simplicity should enjoy this title.

Anyone looking for unique interactions, extra features, big-money jackpots, or great music and animations will likely be disappointed.

For a similarly retro and simple slot experience, you can try out Red, White & Blue. This absolutely classic slot is not available online but is worth a visit next time you find yourself on a casino floor.

For a similar theme with a more modern take, try Super Times Pay. This slot features many of the same Bar and 7s symbols but features a more involved multiplier system and extra features.

Because Triple Diamond has been a well-known game for many years, IGT has developed a few sequels to this title. These include but are not limited to: 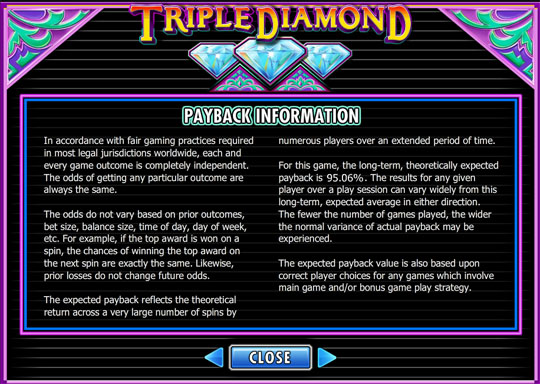 Vintage Three-Reel Experience: If you’re an older slots fan or just like the classics, this three-reel slot might be the choice for you.

Three-reel slots hark back to a simpler time before interactive video slots were the standard. All you need to do now is find a machine with a pull lever for the full “one-armed bandit” nostalgia trip.

Extremely Simple to Pick Up and Play: Triple Diamond is perfectly simple to play, with only nine (easily visible) lines to think about.

Almost anyone, even those with no prior slots experience, should be able to understand Triple Diamond.

No Jackpot: In the modern slot game market, the absence of a jackpot is always a letdown.

The main prize here is just short of $11,000. That barely scratches some of IGT’s standard slot jackpots, let alone the multi-million-dollar progressives.

Lack of Features: While we don’t want to be too harsh on a classic game, most slots fans today will breeze through everything this title has to offer (except the big prize) very quickly.