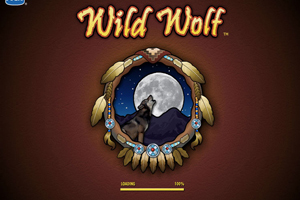 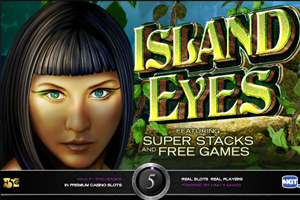 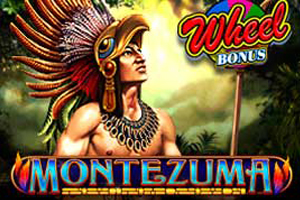 Thundering Buffalo is a slot from High 5 Games that blends animal and tribal themes. Released in 2011, this game pays homage to the rare white buffalo, which is considered sacred among Native American tribes.

Thundering Buffalo is far from a generic game about bison. It takes on cultural significance, which is reflected in the music and symbols. High 5 does a good job of balancing out the deep theme with enough features for casual slots fans who are looking for quick entertainment.

Thundering Buffalo has a strange feel due to its contrasting symbols and background. The symbols are colorful and realistic depictions of bison and Native American cultural objects. The background, however, is a real wilderness setting that looks like it comes from a 1960s wilderness guide. This muted picture doesn’t mesh well with the colorful symbols.

You won’t see many animations after wins. However, this game features one exciting animation, where the buffalo charges at the screen when you earn a large payout. The creature dissipates as it runs towards you and gives way to gold coins spraying across the screen.

Thundering Buffalo doesn’t feature a consistent soundtrack, but tribal drums, whistling winds, and galloping bison sounds play whenever you spin the reels. This combination, which lasts for several seconds after each spin, goes nicely with the theme. 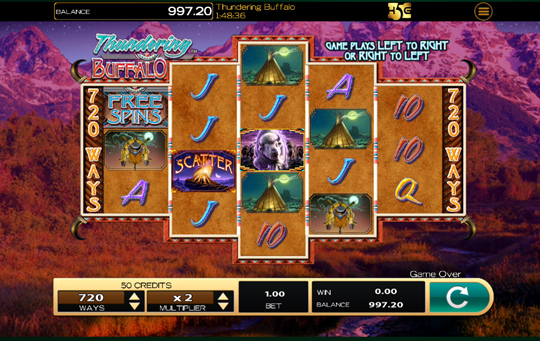 Thundering Buffalo is a 720-ways slot. The minimum wager is $0.50, which activates all 720 ways to win. However, for betting purposes, this game is like a 50-line slot.

Here’s an example to illustrate this:

The multiplier enhances all line wins by the respective value it’s set on. Here’s an example:

We appreciate the large multiplier range. However, we’re disappointed by the lack of options in other areas. Thundering Buffalo doesn’t include autoplay, which is used to keep the reels spinning automatically. All the game offers is the ability to turn the sound on and off.

The return-to-player (RTP) is 94.9%, which is below average industry standards. The white buffalo offers the game’s top payout at 1,000 credits for five symbols. This prize awards you 1 million coins ($10,000) on a 1,000x-multiplier bet. 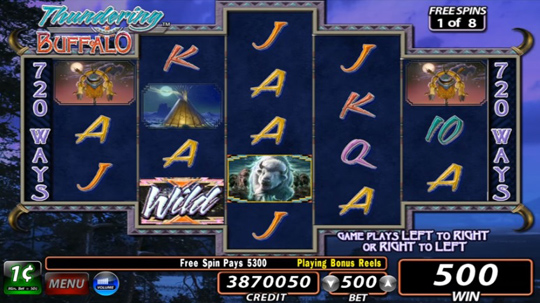 What jackpots does Thundering Buffalo offer?

Thundering Buffalo doesn’t feature a standard jackpot. You can earn up to 1 million credits ($10k) by hitting five white-buffalo icons in adjacent reels. However, you must also use the maximum 1,000x multiplier to attain this win. Considering that it costs $500 to play, you’ll be spending a lot to go for the highest payouts.

This game doesn’t feature the biggest payouts. However, it gives you the potential to earn up to 240 free spins and large scatter prizes.

The wild icon only appears on reels two, three, and four. It substitutes for every symbol except the fire and free-spins icons. It can also appear as a stacked wild, thus increasing the odds of collecting bigger wins. This symbol doesn’t offer any payouts on its own.

The fire icon offers scatter payouts that are multiplied by your total bet. Here’s how these scatter prizes break down: 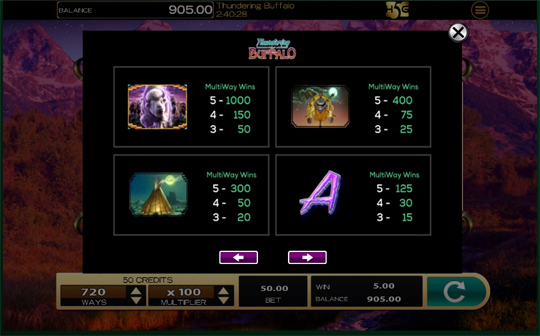 You receive eight free spins to start with and can earn up to 240 by retriggering this feature repeatedly. Note that you receive a 50x scatter payout before the bonus round begins.

Thundering Buffalo is an excellent choice for anybody who’s looking for an interesting theme and unique reel format. Those who haven’t played on a 3-4-5-4-3 grid with 720 ways should be intrigued. This slot will also be appreciated by players who enjoy great symbol artwork and entertaining sound effects.

Anybody who wants to play cheap online slots with large prizes should stay away from this one. Thundering Buffalo requires a $0.50 minimum wager and only offers a top payout of 1,000 credits. Additionally, players must use the 1,000x multiplier ($500) for a chance at any notable prizes.

Thundering Buffalo: Golden Stampede is a sequel that was released in 2017. While the graphics and overall theme remain similar, Golden Stampede differentiates itself from its predecessor in a couple of ways. It offers split symbols and 243 ways, with the latter being a departure from the original’s 720 ways. 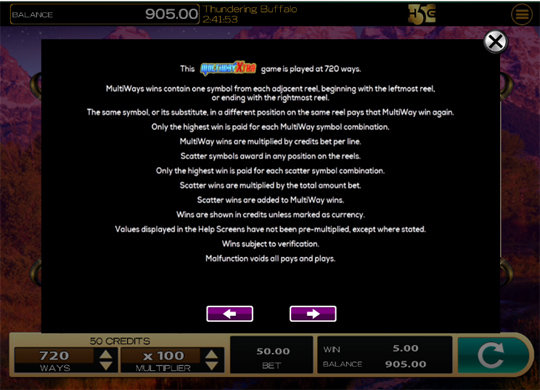 Nice symbols: The buffalo, shrine, fire, and wigwam all feature plenty of detail and vibrant colors. These symbols are part of the reason why Thundering Buffalo remains relevant today.

720 ways: It’s always exciting to have 720 different possibilities of winning. The 3-4-5-4-3 setup is an added bonus that presents something different from the standard 5×3 grid.

No jackpot: This game doesn’t offer a jackpot or any other significant prizes. Hitting a 50x scatter or getting five white buffalos (1,000 credits) on a 1,000x multiplier wager are the only ways to win big.

Few options: The multiplier and ability to toggle the sound on and off are the lone options in this game.

Boring background: The old-looking background meshes poorly with the colorful symbols. No game released in the 2010s should feature such a setting.