The Vanishing Act is a five-reel, 40-line slot based on high-profile magic acts. High 5 released this game for online play in 2011.
David Blaine, David Copperfield, and Penn & Teller have each played a role in glamorizing stage performance magic. The Vanishing Act is a nod to these legends, with the main character even bearing resemblance to a younger Copperfield.

This slot revolves around an illusionist and the different tricks that he performs. The background is fashioned to look like a large wooden box that he might escape from during a show.

The backdrop isn’t perfect – the box looks old enough to have been used by Harry Houdini. This game has a modern feel to it, and we would’ve liked to see a background more reflective of this.

Luckily, the symbols do a great job of portraying a big-budget magic performance. The illusionist appears as three icons, including him escaping from a water tank, handcuffs, and a straightjacket.

Other symbols include a wild icon, free-games icon, dark-haired assistant, blonde assistant, A, K, Q, J, and 10. All of the symbols involving the magician and assistants feature great graphics.

Some of them also trigger animations when appearing in wins. Here are examples of the animations:

This game doesn’t feature a regular soundtrack. It does, however, play generic music while the reels are spinning.

The sound effects are more original than the music. For example, the sound of bubbling water plays while the magician is escaping from the water tank. 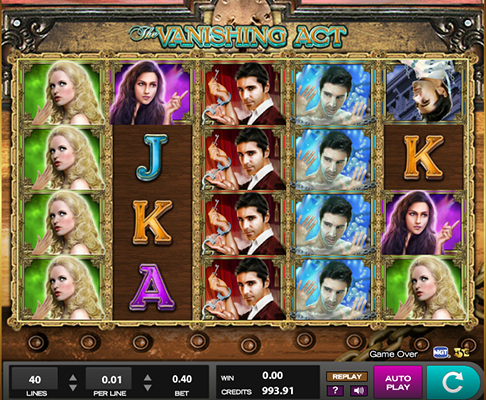 These options create a betting range of $0.01 to $400. You will likely appreciate the variety regardless of whether you play for low or high stakes.

Gameplay options include autoplay, replay, and sound. Autoplay allows you to make the reels spin automatically for 5-25 rounds.

Replay lets you re-watch the previous spin, which is handy for recording or screenshotting big wins. Sound can be toggled on and off with the speaker button.

The Vanishing Act’s return-to-player (RTP) is 94.9%. During our test run, we experienced low volatility and earned plenty of payouts, both with and without the features.

This game’s largest payout is worth $10,000 and can be earned by hitting five wild symbols and a $10 line bet. The second-highest payout is $2,500 for four wilds.

What jackpots are available in The Vanishing Act?

This slot doesn’t offer a jackpot. The top prize is 1,000x the line bet, which is relatively small compared to other online slots.

The Vanishing Act doesn’t provide a large top payout. However, it does offer features that can enhance the value of your wins.

The Vanishing Act’s logo is the wild symbol. It substitutes for everything except the free-games icon to form wins. 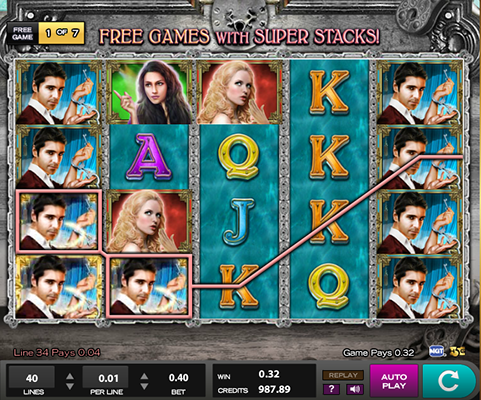 The free-games symbol serves as the scatter. It only appears on reels two, three, and four.

This icon’s lone purpose is to trigger free spins. Unfortunately, it doesn’t offer payouts, although scatter symbols in many other games do.

The Vanishing Act frequently offers Super Stacks, which consist of the same symbol stacked in an entire reel. There are four spaces in each reel, so four matching symbols appear in every Super Stack.

Three or more Super Stacks landing side by side (beginning with the leftmost reel) offer a Super Symbol. You can potentially cover all five reels with a Super Symbol and earn a huge payout.

The free-games logo triggers free spins by landing 12 times in reels two, three, and four. Seven free spins are awarded after the bonus is triggered.

The background changes to a water tank during this bonus. Intense music plays to set the mood for the illusionist’s death-defying act.

Who is The Vanishing Act ideal for?

Those seeking slots with elaborate settings and features should skip this game. Although the background and features are decent, they don’t stand out when pitted against more modern slots.

The Vanishing Act is the only magician-themed slot from High 5. However, one game with similar graphics and features is Figaro.

Figaro is a six-reel, 466-line slot based on Mozart’s Figaro the Opera. It has a similar stage feel to The Vanishing Act along with free spins and expanding wilds.

However, its background and symbol graphics look less polished. Figaro also features a more niche theme that will appeal to fewer players. 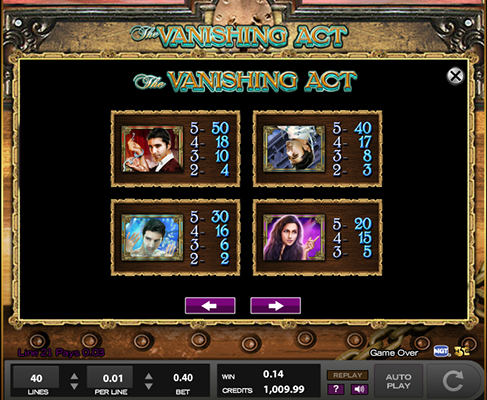 Wide betting range: This slot allows bets ranging from $0.01 to $400. Low-budget players will appreciate the ability to play for pennies, while high rollers will enjoy betting hundreds of dollars.
Clear presentation: The symbols and animations do a great job of portraying the theme. Every character symbol is detailed and comes with an accompanying animation. We especially enjoy the animations involving the illusionist.

Frequent wins: In our experience, this slot offers very low volatility. We didn’t go through any long win droughts and were able to trigger the feature three times within 20 minutes.

No jackpot or huge prizes: The top prize is only worth 1,000x the line bet, which is very low. The maximum payout is $10,000 when combining the top prize with a $10 line bet. Most players won’t be comfortable risking this much on each line.

Below average RTP: The Vanishing Act’s low volatility can blind you to the mediocre 94.9% RTP. Most online slots offer 95+% payback.

Off-kilter background: Featuring a worn wooden box, the background would be a better fit for a game about nineteenth-century magicians. The Vanishing Act, on the other hand, evokes thoughts of modern acts like Copperfield and Blaine wowing millions of TV viewers.