The Secrets of the Forest Slot Machine Review

The Secrets of the Forest was born from a collaboration between real-world game specialist High 5 and online powerhouse IGT. This slot has been on the market for around three years, so it is no spring chicken in the ever-evolving slot world.

Although the game is a bit old-fashioned, it may suit some players looking for a no-thrills experience. Read on to find out more about what the Secrets of the Forest slot has to offer, then decide for yourself.

As the name suggests, the game is played on a backdrop of a forest. The “secrets” are a group of pixies that decorate the five reels and three rows in various alluring poses. Vines flow up and down the reels, and grass decorates the other symbols, giving the design a woodland feel.

The backdrop is the first thing that shows the game’s age – it is merely a set of stagnant trees that even seem to be slightly pixelated. It doesn’t exactly blow you away. This does not extend to the reels or the symbols, though, which are of a higher image resolution.

The highest symbols on the reels are the three aforementioned pixies – the “secrets” – which are differentiated by different poses and hair colors – brunette, blonde and purple. The pixies offer 20-1,000 coins depending on which and how many symbols you line up on the reels.

The highest symbol on the board is a square symbol that reads “Secrets of the Forest,” which also serves as the game’s logo. Although it isn’t very imaginative, it pays out 5,000 coins for five matching symbols.

Music in this game is not continuous, but there are sound effects when activating different elements of the game. For example, when you trigger a wild, win a free game, or achieve a payout, the game lets out a short mystical tune as a golden line flows through the activated symbols. This brings the theme to the forefront – an aspect that is otherwise lacking.

The only issue with the sound is that when it plays during only a spin, it ends very abruptly, which can become annoying after a few spins. 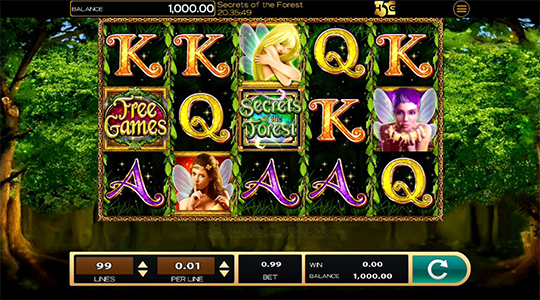 You will find 99 paylines here, which is a respectable number. All of these are fixed, so they are in play with every spin, and you need to wager for each one payline.

You wager at least $0.99 per spin as the minimum wager is $0.01 per line. Consider this before you start playing – you can easily spend $198 on the maximum payment level if you aren’t aware of how the paylines relate to your wager.

You can wager $0.02-2.00 per line, which might appear as a gradual increase, but it translates into much larger numbers on the total bet. Keeping an eye on the correlation between the paylines and your wager is crucial to not tearing through your bankroll.

The game’s paytable is static, so any winnings you receive for your wager are not visible. However, you can work out the total winnings by multiplying your bet by the number of coins displayed on the pay table. Total winnings are between five and 5,000 coins per spin depending on the symbol and its frequency on a payline.

There is no autoplay feature; you need to click each time you want to spin, which allows you to adjust your bet per line and keep an eye on your spending. A big issue we discovered when we played the game is that the buttons tend to be unresponsive, so you may need to click a few times before the reels spin.

The game come with an RTP of 94.9%, which isn’t too bad for an older game but still sits below the current industry average of 96%.

What jackpots are available in the game? 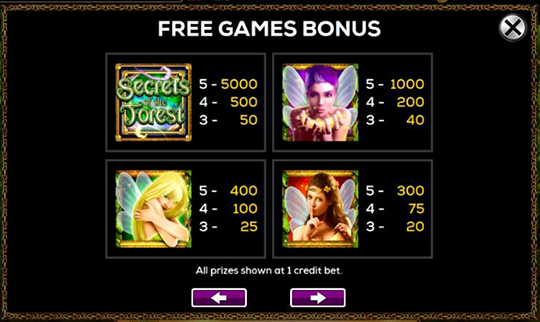 There are no jackpots available in the Secrets of the Forest. As a result, the maximum win is simply the value of five of the highest symbol on the reels multiplied by the maximum wager, which works out to a $990,000 maximum win.

The game includes a couple of additional features that spice up the gameplay. They aren’t too fancy and won’t see you taking on new challenges, but they can still boost your winnings.

One of the most useful symbols on the reels is the “Free Games” symbol. You can identify it easily as it looks identical to the “Secrets of the Forest” symbol, the highest on the reels, except with “Free Games” written on the front instead. These symbols appear on reels one, two, or three, and by lining them up, you can win yourself 1-4 Free Games, aka Free Spins.

Interestingly, this game features two wilds, but they both serve the same purpose of replacing existing symbols. The difference is that they appear on different reels, with one being a circular shape and the other rectangular. They both say “Wild” on the front, so you shouldn’t have trouble spotting them.

This game is best suited for players that are looking for no-nonsense gameplay with a bit of charm. There are no exciting bonus rounds, the gameplay is very standard, and even the theme doesn’t jump out at you – all due to its age. However, it does offer free game features, Wilds, and some engaging design aspects.

If you are an old-school player who is getting tired of games becoming overcomplicated, then you will be satisfied with this title. However, there are still more straight-forward classic slots with better themes and functionality.

In terms of bankroll, at $0.99 to 198 per spin, the game is in the middle of the price range, which means most players can try it out.

Similar Games from High 5 and IGT 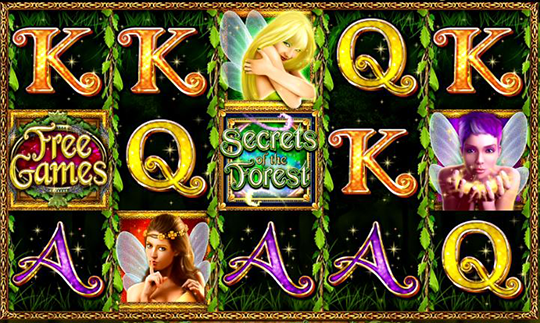 This game doesn’t hit the mark with its theme and gameplay, but if the concept jumped out at you, then today is your lucky day – this game already has a sequel.

Pixies of the Forest makes better use of the theme elements on offer and has smoother gameplay. It got rid of the glitches but keeps the same style elements, so it is essentially just a new and improved version of this game.

If you are looking for a forest-based game with a bit more innovation and style, then try out Wishwood. IGT released this game last year, and it provides much more dynamic gameplay with more bonus features and an interactive design. Wishwood provides an experience that is much more fitting for modern players who want more out of their slot game.

High 5 doesn’t have games with a similar theme, but they offer many slots with similar straightforward gameplay.

Free Games Symbol – You can win up to four free spins when they appear on the wheels.

High Paid Symbols – Some of the symbols on the reels can be highly lucrative if you rack enough of them up.

Straightforward Gameplay – No thrills with this one. Simple, straightforward gameplay that anyone could understand and play instantaneously.

High Number of Paylines – 99 paylines is respectable for any game on the market. 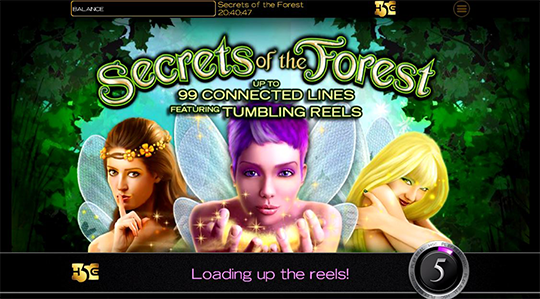 Massively Glitchy – The game doesn’t react properly a lot of the time, which means you may find yourself clicking multiple times or waiting for things to load.

Outdated – From design to gameplay, this title pales in comparison to every newly-released game on the market.

Low RTP – Dropping below a 95% RTP is not good enough nowadays.

Unclear Betting Values – Knowing how much you are betting isn’t very clear and can be misleading, which means you may bet way more than you intend if you aren’t careful.

Not Enough Bonus Features – With just one real bonus feature on offer, the game isn’t generous in this department.