WMS (Williams Interactive), a subsidiary of Scientific Games, boasts a sizable catalog of Monopoly-themed slot games for both land-based casinos and online players. Super Monopoly Money is one of their most advanced looking Monopoly games that features a nice design, bold graphics, slick animations, and robust bonus features.

The Super Monopoly Money reels are set against a backdrop of the Eifel Tower in Paris and the Big Ben in London with a river lying in between. It doesn’t really make sense, but it looks good enough. The colors are bright, the graphics are crisp and nicely rendered, and the game console looks fresh and current. There are also plenty of animations for added flair.

The reels are filled with your favorite Monopoly characters and tokens with a host of special symbols added to the reels. Jackpot symbols are the most valuable, with a whopping jackpot payout of $75,000 if you hit five matching jackpot symbols playing with the maximum bet.

Other valuable symbols include Wild symbols, the Mr. Monopoly (Monopoly Man) character, a tycoon, a Scottie dog character, buses, taxis, and pots of money. There are refreshingly no playing card symbols on these reels, with classic Monopoly tokens like the racecar, top hat, boot, and battleship as the lowest paying symbols instead.

The reels are also packed with special bonus symbols like Free Parking symbols that all get replaced on the reels by a single hidden symbol you select.

Bonus symbols trigger the free spins feature, and Monopoly Wild symbols award Monopoly Money and a spin on the Monopoly Wheel. The Wheel awards multipliers and special features like Chance games and Community Chest cards that award more multipliers. Wins can really add up when you hit the Go! Re-spin space and all multiplier values on the wheel become even higher.

Jazzy music totally befitting of the classy Monopoly theme plays in the background, and a game show style announcer provides commentary about the game’s features and your gameplay. 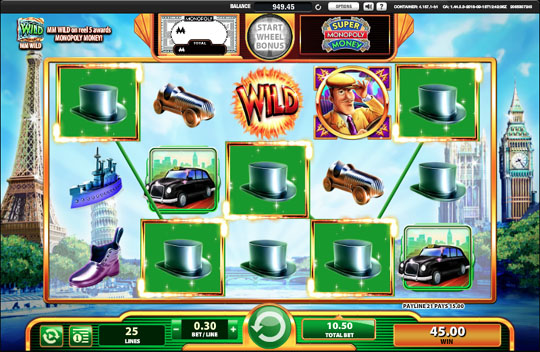 Total bets are not a straight calculation because the game automatically adds an extra  “Feature Bet” wager to every spin. For example, when you play with the minimum bet, a 0.10 feature bet is added to the line bet total of 0.25 to get a total bet of 0.35. It is not possible to remove that feature bet amount, so your total bet at any bet level will be higher than your line bet times 25 lines.

The in-game paytable updates automatically to display the payout values for your current bet value. Apart from the Jackpot symbols, Wild symbols are the highest paying symbols on the reels with five matching wild symbols paying out 5.00 on a minimum bet and 1,500.00 on a maximum bet.

The Monopoly tokens are the lowest paying symbols on the reels, with the boot and the top hat paying out 0.05 on a minimum bet and 15.00 on a maximum bet for three matching symbols. 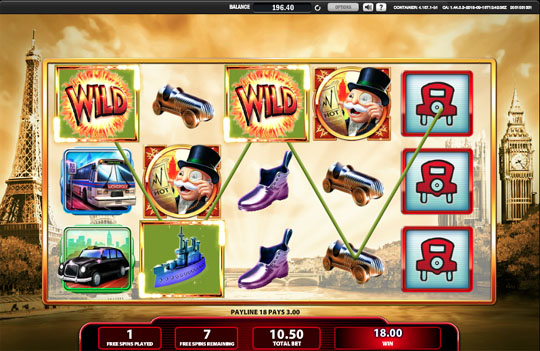 Jackpot symbols on the reels pay out 75,000 for five matching jackpot symbols (with no wild symbols) on a maximum bet, which is the highest possible jackpot payout at over 700x your bet.

There are no other local jackpots and no progressive jackpot options in this game.

This game offers a variety of different bonus features in the base game and special bonus games.

“WILD” symbols are the highest paying regular (non-jackpot) symbol on the reels and substitute for all symbols except any of the special feature symbols. 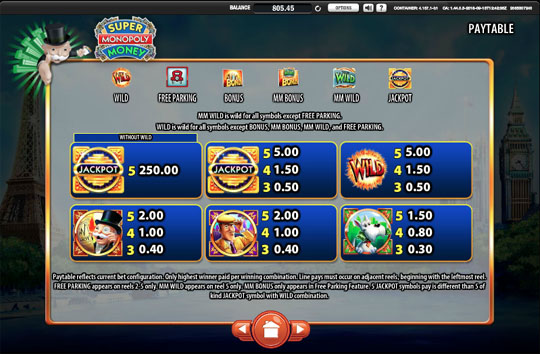 When the Free Parking feature is triggered, choose a car icon to reveal a symbol and all Free Parking symbols on the reels will be replaced by that symbol. The hidden Free Parking symbol options always include a Wild symbol, a Bonus/ MM Bonus symbol, and three symbols that landed on reel one on that spin.

If the Free Parking Feature is triggered during autoplay spins, a Free Parking symbol is automatically and randomly selected for you.

Free spins can be retriggered, and additional free spins are added to the number of remaining free spins. Winning combinations and payouts are the same for the free spins game and the base game.

When the MM Wild symbol lands on reel five, it expands to cover the entire reel and triggers the Monopoly Wheel Bonus Game.

On the Monopoly Wheel game screen, you can choose one of the following three options:

Like other WMS Monopoly-themed slot games, this game is ideal for fans of the Monopoly board game. This online slot is also perfect for fans of the Super Monopoly Money game found at land-based casinos, although the online version is missing the huge reel featured on the physical slot console.

The advanced graphics and robust bonus features will appeal to a wide variety of players as well.

The Monopoly slot franchise is one of the things that put WMS slots on the map, and they’ve amassed quite an impressive selection of Monopoly slots titles over the years like Epic Monopoly II, Monopoly Big Event, Monopoly Bring The House Down, Monopoly Mega Movers, Monopoly Money In Hand, Monopoly Big Money Reel, and Monopoly Once Around Deluxe.

All of these games share the Monopoly branding including Monopoly characters, tokens, and game board, but each of these slots features a unique design and features.

For example, Epic Monopoly II shares many of the same symbols and feature concepts as Super Monopoly Money. However, Epic Monopoly II boasts two reels, a 5×4 set of reels plus a 5×12 colossal reel with a total of 100 lines between the two reels. 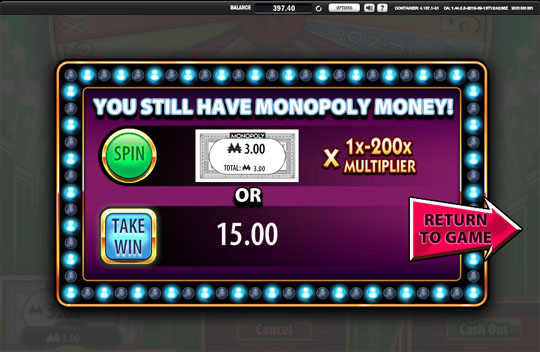 Lots of Features: A variety of special features on the reels and special mini-games triggered frequently to keep gameplay engaging.

Monopoly Wheel: In a game show like setting, spin the wheel to win multipliers or special features.

Free Spins Bonus Game: Win up to 15 free spins that can also be retriggered.

Free Parking Feature: Reveal a symbol that replaces all of the Free Parking symbols on the reels to help create winning combinations or trigger bonus games.

Limited Free Spins Features: Free spins payout values are the same as in the base game, there are no multipliers, and there are no added special features.

Complex Bonus Features: There are some complexities and options wrapped up in the bonus features that aren’t obvious or clearly explained in the game instructions.