You’re invited to a party on the reels, and you’ll be glad you came. Super Jackpot Party serves up some highly entertaining gameplay with a unique set of interactive bonus features.

Released by WMS (Williams Interactive), a subsidiary of Scientific Games, this slot has stood the test of time as a player favorite on both land-based casino floors and online. The game features two different jackpots on the reels plus a big party bonus feature with lots of extras that keep players coming back for more.

Super Jackpot Party is a party on the reels with both jackpots and interactive party bonus games. Set against a bubbly background, the black reels are peppered with garish, neon party-themed symbols like presents, balloons, punch bowls, and plastic drinking cups.

Mixed color combinations of lucky number seven symbols take the place of the typical playing card symbols as the lowest value symbols on the reels.

Lucky number seven combinations with the same matching color, on the other hand, are the highest paying regular symbols. Jackpot “7” symbols and Super Jackpot Party symbols award two different jackpots, which can pay out a maximum jackpot of 250x your bet.

Spinning, sparkling disco balls are wild, and two different scatter symbols (the party guy and the noise maker) can trigger the infamous party feature bonus game, which is off the hook. The party guy character hosts you as you get to pick from a screen full of presents that reveal prize values and even more bonus features with fun animated mini-games, more prizes, and even multipliers.

A groovy seventies soundtrack backs all of this action, with funny announcements from the party guy and other cartoon characters in the party bonus game, backed by classic seventies jams like “Celebration” and “Turn The Beat Around”. The base game reels also spin to some seventies grooves, and the win jingles synch with the beat as your points add up. 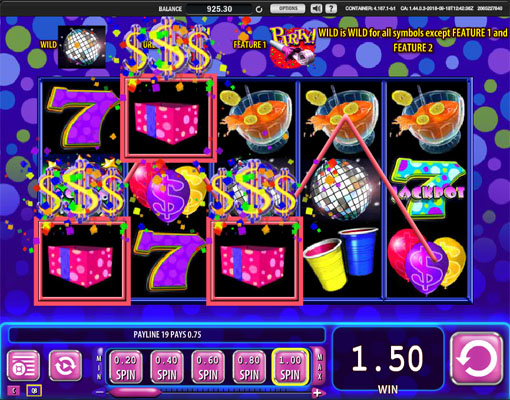 Super Jackpot Party serves up five reels and three rows (5×3) of fun on 20 fixed lines. It’s not possible to change the number of lines, but you can change your bet per line on those 20 lines.

The minimum bet starts at 0.20 and goes up to a maximum bet of 100.00. The bet per line (Bet/Line) can be changed by 0.01 increments by using the up and down arrows in Classic view, or use Quick Bet view to select your Total Bet value using the slider bar.

The in-game paytable updates automatically when you change your bet to display the correct payout values Apart from the jackpot symbols, the highest paying regular symbol is the green number “7” symbol that pays out 5.00 with a minimum bet and $2,500 with a maximum bet for five-of-a-kind combinations.

The lowest paying symbols on the reels are three matching punch bowl and drink cup symbols, and three mixed number “7” symbols, which all pay out 0.05 with a minimum bet and 25.00 with a maximum bet.

Autoplay options can be customized to automatically stop once you reach a maximum number of spins, playing time, win amount, stake, or a specific change to your account balance.

The RTP (Return-To-Player) percentage for Super Jackpot Party is a solid 96.01%, which is average compared to other WMS games. 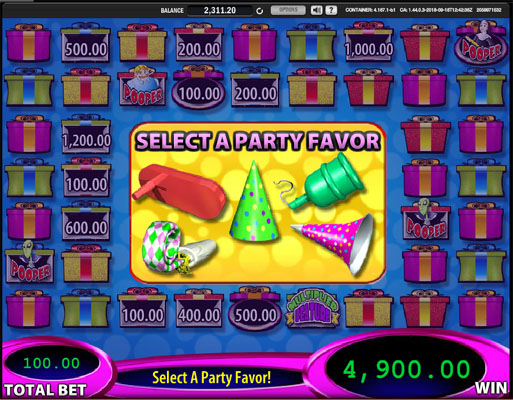 Sparkling disco balls are wild, substituting for all symbols except the two special feature symbols. Wild symbols are on all reels except for reel one.

The party feature screen is filled with presents that contain prizes (monetary awards), special game features, and “party poopers” that end the Party Feature. Click on presents to reveal what is inside, with monetary prizes ranging from 1x – 20x your total bet.

Three different Party Animal Feature symbols are hidden inside presents as well that award the Dance Feature, Multiplier Feature, or the Whack-a-Pooper Feature.

When the Party Feature is over, you get a party favor. Choose one of the party favor pictures to reveal how much money you won, with prize values ranging between 1x-2x your total bet. If a Party Saver is revealed, though, you get to keep playing from where you left the party.

The Party Feature can be randomly triggered on any spin instead of being triggered by the Feature scatter symbols. When that happens, the screen automatically goes dark, and the lights come back on to the Party Feature launching.

This slot game has wide appeal, given how fun the bonus game is to play. It is easy to play yet engaging, and the jackpots and upside potential on the bonus game are pretty sweet. This could work for a variety of different players, from beginners to more experienced players, and players that enjoy interactive and unique bonus games.

Jackpot Block Party added a pick and click game on the reels for present symbol combinations and there are four different interactive party bonus features that can potentially be triggered at the same time for synchronized gameplay.

Select presents to reveal monetary prizes and more bonus features like the “Punch-A-Pooper” Feature, all features similar to Super Jackpot Party. There’s also a jackpot game symbol on the reels that pays out a maximum of 333x your bet. 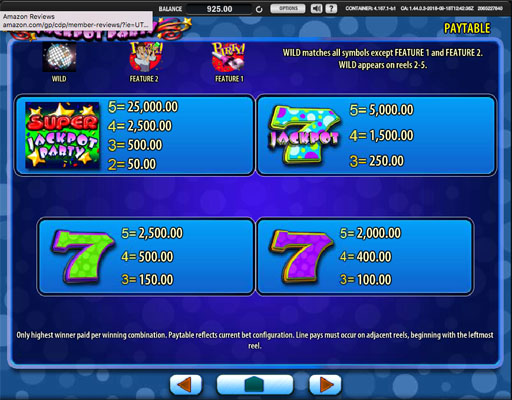 Jackpots: Two different jackpots are on the reels that can award as much as 25,000 for the biggest jackpot (on a maximum bet).

Interactive Features: Many of the bonus features are interactive with pick and click game options.

No Playing Card Symbols: The reels are only filled with party symbols and lucky number sevens.

No Free Spins: The Party Feature is an alternative to free spins, which gives plenty of options for wins, but this could be a bummer for free spins fans.

Dated Graphics and Animations: This game is aging, with some dated graphics and basic animations.

Color Scheme: The color scheme in the base game is somewhat garish.