One of Konami Games‘ latest offerings to the world of slots is Sparkling Roses. Having only been on the market for a few years, the title has already swept some players off their feet with the beauty of its graphics and the excitement of its Mystery Multiplier.

The 3×5-reel game appeals to all players, although women may be especially drawn to the roses and sparkling Action Stacked Symbols. The jewels and wild symbols should grab everyone’s attention – especially those seeking big payouts from free spins and multipliers. As the game continues to spread to more casinos, Sparkling Roses is likely to become even more of a player favorite.

There is no escaping the beauty of all the symbols in Sparkling Roses. The roses themselves pop from the screen; the purses of green jewels are eye-catching; and the purple keys, pink perfume bottles, and blonde-haired woman are detailed beautifully.

The four-gem-filled wild symbols are always welcome to stand in for any of those symbols.

Even the Jack, Queen, King, and Ace icons are more ornate than in most games.

Gold surrounds the reels, and in the background of the screen are curving staircases under a diamond-gold chandelier.

The music that plays during free spins is upbeat, though there is no soundtrack during regular spins.

Sparkling Roses offers 30 paylines across five reels and three rows. Paylines begin on the left-most reel and cross in order, except for scatters (roses). 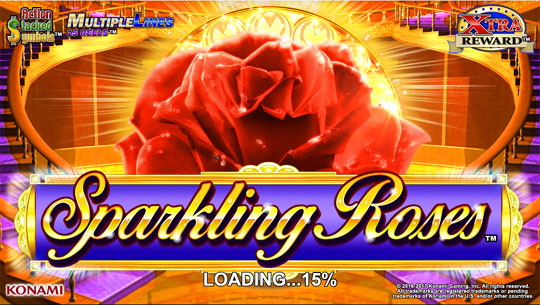 While there is no jackpot in Sparkling Roses, big wins are possible because of the multipliers. Most multipliers range from 2x to 5x, but playing the maximum lines and denominations can push them up to 144x. That puts the maximum payout at approximately $486,000.

Those multipliers can hit during the primary game or free spins, and they appear on symbols with the woman, green gems, perfume bottles, and keys. Wilds appear in regular play but not during free spins.

No. Sparkling Roses doesn’t offer a jackpot, although multipliers are the key to hitting significant payouts. 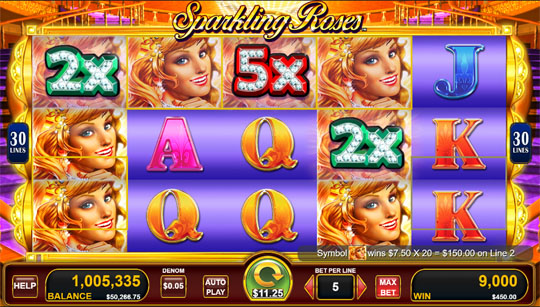 The sparkling roses are the sought-after symbols as they trigger rounds of free spins as well as scatter wins. Wilds also increase the winnings, but it is the multiplier feature that truly adds to any payline win and gives the player the surprise payout that makes the game so fun.

The wild can’t be missed as the word “wild” is written across the symbol. It is a square of purple, green, pink, and yellow gems, and it can appear on columns two through five. It substitutes for any and all symbols on the reels, though it does not appear during the free spins.

The rose in Sparkling Roses serves as the trigger for free spins as well as the scatter symbol. Any time the rose appears on a reel, it expands out of the screen so it can’t be missed. Scatters are multiplied by the lines played and bet per line, with six or more roses paying ten credits as the base. Roses can also appear during free spins, triggering more free spins and scatter wins.

As mentioned, roses trigger free spins. Three, four, or five roses trigger five, eight, or 12 free spins, respectively. Six or more of the rose symbols give the player 20 free spins. During those free spins, the roses can continue to appear as scatters and possible additional free spins, and the multipliers are in full effect during the free games. The only symbol that doesn’t appear during free spins is the wild.

The special feature of Sparling Roses is the multiplier. The mystery part of its name is due to its random appearance on various symbols, whether during primary gameplay or free spins. The multipliers are only based on the bets per line and denomination, ranging from 2x to 144x. 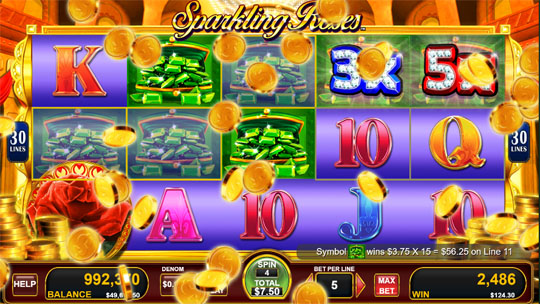 Mystery Multipliers can appear on the blonde woman, purse of green gems, pink perfume bottle, or purple key symbols. More than one multiplier can appear on more than one symbol per spin. The regular payline wins are then multiplied by the total multiplier and paid out. Wilds do not appear at the same time as a multiplier, though.

Female players are most drawn to Sparkling Roses because of the bright colors and symbols most associated with women, such as perfume and roses. The overall theme is directed at women.

The significant payouts, however, attract all kinds of players because of the possibility of hitting a big payline with a high multiplier. It is more common for men to play Sparkling Roses online than in a live casino.

Recreational players can play for a long time at only $0.30 per spin, and those with larger bankrolls can game up to more than $50 per spin. Higher bettors have a better chance at hitting bigger multipliers, too, so the wins can stack up quickly.

There are a few other titles in the Konami Games collection that offer the Mystery Multiplier feature, the most popular being Safari Storm Inferno and Gypsy Fire Inferno. 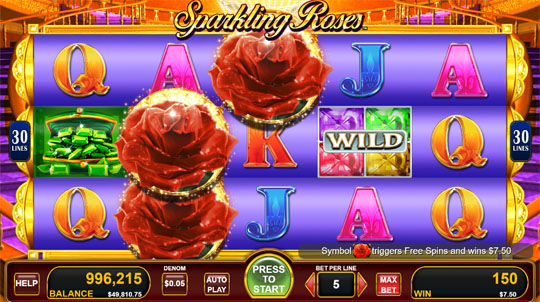 Mystery Multiplier feature: Any win is welcome, but knowing that there can be a multiplier waiting to magnify that win is even more exciting. The Mystery Multiplier feature can pop up on the major symbols during regular play or free spins, boosting that payline win up to 144 times its original amount. This feature is the primary draw for Sparkling Roses players.

Scattered roses: The roses stand out as the main symbol in the game not only because they serve as scatters and bloom from the screen; their role as keys to free spins makes them even more coveted.

Wide bet range: With free spins and multipliers available at every level of play, Sparkling Roses attracts low-limit players with $0.30 spins as well as high-dollar gamblers at $56.25 per spin. Players appreciate the denomination choices in newer Konami titles.

Bold colors: Players are often attracted to themes over colors, but this game offers both. The colors are bright and beautiful with roses popping out of the screen.

Few bet line options: Most casino games offer bets per line that start with one and two but increase to ten, 20, or even 50. Sparkling Roses tops out at five bets per line, limiting some players’ choices.

No jackpot: Naturally, jackpot and progressive games attract more players with life-changing money on the line. However, payouts can be substantial with this game, even when playing at lower denominations.