The summer solstice is one of the most celebrated times of the year for many people around the world. It marks the day when the sun reaches its highest point – the longest day of the year. Konami Games created the Solstice Celebration slot to bring that joy and warmth to the casino world.

With bright colors, flowers, and sunshine, Solstice Celebration introduces unique features, such as the Sparkle option and nudging symbols. The opportunity to win up to 40 free games and choose a denomination and bet per line are some of the ways that this 2012 game keeps players coming back to this five-reel slot year after year, solstice after solstice.

Butterflies, sunflowers, horses with shining manes, and diamonds fill the screen as players watch the five reels spin. They are randomly interspersed with the typical 9, 10, Jack, Queen, King, and Ace. When surrounded by a gold frame, any one of those symbols triggers the Sparkle feature that fills the reel with a complete set of that particular symbol.

The wild symbols are suns with multi-colored flames, and the bonus reels fill with a radiant goddess who embodies life and rebirth. Two or more goddesses launch the player into free games, and the suns nudge to fill their reels during those free spins.

Magical sounds accompany the Sparkle feature and add to the light, refreshing feel of the entire Solstice Celebration game.

Solstice Celebrations is a 3×5 reel slot with 30 paylines. The game features nudging Action Stacked Symbols, fixed stacked wilds, and nudging wilds in free games, all on the KP3+ platform.

The Sparkle feature is unique to Solstice Celebration. Any two positions on a reel that are encased by gold frames instantly change to matching symbols that increase the player’s chance of winning a payout on at least one line. They can also be replaced with wild or bonus symbols.

During a Sparkle feature, the bonus symbols may appear on any two or more reels, which triggers the free game bonus. Two reels offer ten free games, three reels make it 15 games, four reels put it at 20 free games, and five reels filled with goddesses trigger 40 free games. During the free spins, the sunshine symbols appear as wilds and nudge all other symbols on that reel out, creating entirely wild-filled reels.

The sunshine symbols pay the most – five of them at a single-credit spin pay 500, while the scatter goddesses pay one-fifth that amount. Five diamonds pay 250, horses pay 200, and butterflies and sunflowers pay 150 each.

The return-to-player (RTP) for Solstice Celebration is 96.03%.

There is no jackpot in Solstice Celebration. However, hitting all of the suns in a bonus round could pay off very nicely, especially if playing the most betting lines and with a higher denomination.

There are numerous features in Solstice Celebration that catch players’ attention, some unique to this game and others made more engaging by the theme. From the Sparkle feature to the wilds during free spins, there is always something to grab and keep players at the game for one more spin. 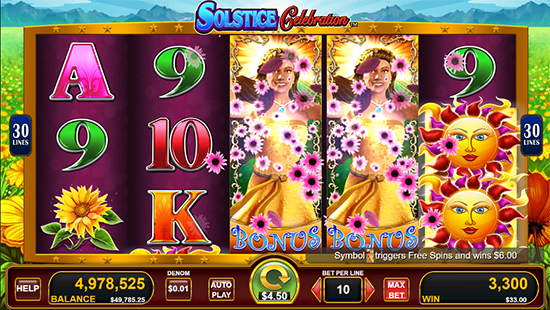 The female-faced sun symbols are the true wilds in the game, popping up in the Sparkle feature when the framed positions appear as a trigger. Those same suns take on the nudge factor during the free games, with any sun nudging the entire reel into one full of wilds.

The unique Solstice Celebration feature called Sparkle is the key to the bonus round, but it pays well on its own. When any two positions on at least two reels appear with the golden frame around them, the reels sparkle and change into the same symbols, increasing the player’s chance of winning a line.

The Sparkle feature is also the key to triggering the bonus round as the Sparkle process can replace a reel with the bonus goddess, and two or more goddesses award free spins. Goddesses can appear on two, three, four, or five reels, which then translate into ten, 15, 20, or 40 free games, respectively.

As mentioned, the free spins brought on by two or more goddesses during a Sparkle feature launch when the player hits the “start” button. The spins then allow the wilds to become nudge symbols, which frequently create more wilds and increase the bonus round payouts.

Women are generally more attracted to Solstice Celebration for its brightness and glowing summer images, not to mention the goddesses who hold the highest position in the game. Players also enjoy the Sparkle feature that changes the makeup of reels at random, and the frequency of winning something on most hands keeps players in their seats.

The range of denominations and betting lines brings players of all bankrolls to the game. One can spin twice for less than one dollar or play very high stakes by maximizing every bet. Most customers tend to be somewhere in the middle, however, so this slot satisfies the needs of many casino players.

Konami’s vast game selection includes several that are similar in theme and features to Solstice Celebration. The most obvious one is Celestial Celebration as it focuses on the other solstice that is celebrated around the world in winter.

Riches With Daikoku is a slot with a very different theme, but it also uses a version of the Sparkle feature, which is a rare occurrence in Konami Games.

Sparkle feature: The feature that sparkles unrelated symbols into oblivion in favor of matching symbols in a reel is the best part of Solstice Celebration. The sparkle itself is intriguing, solves a magical mystery, and is the singular key to unlocking the bonus round of free spins.

Bright theme: The vibrant colors of spring and summer are a clear draw for players, whether they are playing on a computer or in a live casino. The attractive symbols are the keys to winning. And who doesn’t like diamonds?

Range of bets:  Players of all financial capabilities can play Solstice Celebration for as little as $0.45 or as much as several hundred dollars per spin.

Win frequency:  It may take some time to trigger a bonus round, but the frequency of the Sparkle feature makes it feel like winning is more consistent. The colors mixed with sparkling symbol replacements keep a player’s interest far longer than games without regular pays.

No jackpot:  Wins can be substantial in Solstice Celebration, but the absence of a specified jackpot win or connection to a progressive jackpot may keep some players from trying the game.

Gender-specific symbols:  Men tend to be more frequent slots players, but the graphics in this game appeal mostly to women. Some men may be turned off by the butterflies and sunflowers, finding the game unrelatable and unwelcoming.