IGT has been developing slots for nearly 20 years, so it’s only expected that they would try and create new slots formulas eventually.

720-way slots dispense with traditional slot paylines. Instead, matching symbols on any adjacent reel will award a win – no matter their position.

However, some changes were needed so as not to push these games too far in the player’s favor. In this case, it means an adapted reel system.

The reels on Siberian Storm and other 720-way games use a honeycomb-like structure. Instead of all five reels containing the same five slots, only the central reel includes five rows. The two on either side have four, and the two reels on the edge have three.

This Multiway Xtra system gives Siberian Storm a unique feel that you won’t find at too many other slots titles.

Siberian Storm looks decent overall, but this 2011-debuted slot is beginning to show its age when compared with the most modern titles.

The jewelry icons might be stylized tiger teeth or bones, or something else entirely – we aren’t sure.

The music is an epic fantasy-style soundtrack. Not terrible by any means, but hardly breaking boundaries either. Occasional tiger roars accompany big wins.

We did like the little touches, though, such as the score fading out after the reels stop spinning rather than abruptly cutting out completely. 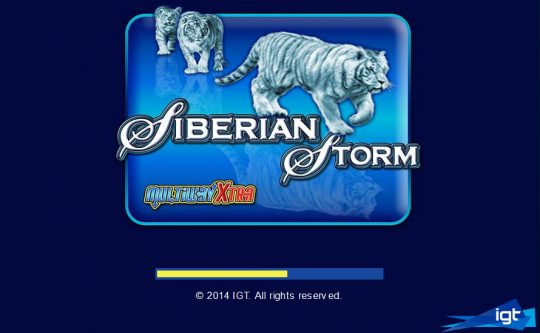 Siberian Storm’s 720-way-to-win system is its most unique attraction, and colors the rest of the betting options here.

Wagers on Siberian Storm are all x50 on your base bet as there are too many ways to win for a per-line bet system to make sense.

This means they start at $0.01, or $0.50 per spin, and go up to $10 or $500 per spin. This is definitely targeted towards the highest of high-rollers. Five hundred dollars a spin is a high limit, and you won’t find many slots that go higher than that.

Penny slots and other budget players might be disappointed with the minimum bet.

However, this system gives Siberian Storm players the opportunity for big wins on the main reels. Pulling more than of a symbol on a reel during a winning combo multiplies the win by the highest number of identical symbols on any one reel.

The RTP, or Return-to-Player, of Siberian Storm ranges between 92.5 and 96%. This makes Siberian Storm a medium variance game, with an RTP ranging between low and average.

There is no designated jackpot on Siberian Storm. Big wins on the main reels can reach up to 4000x your base bet – that is your coin value before 50x is applied to make your total bet.

This means potential prizes can reach $40,000 on a max-wager spin.

However, this doesn’t make up for the lack of signposted, fixed level jackpot. These kinds of big prizes are essential to the longevity and popularity of any title in the modern market, and Siberian Storm is sadly lacking on this front. 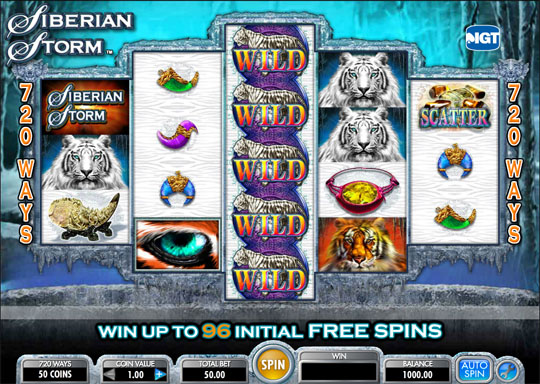 There’s only one bonus round at Siberian Storm, and that is an extendable free spins bonus.

There are still a few scatter symbols and Wilds as well as other features such as stacked wilds.

Players will find two kinds of Wild Symbols on Siberian Storm’s reels. These are both helpfully labeled as Wild.

One appears on the main reels and the other on the bonus reels when the free spins feature is activated.

They are both standard slot game Wilds, in that they substitute for any other symbol when making a winning combination. Players will also see stacked Wilds, where two or more Wild symbols appear on the reels in a clump.

Players who pull these on a spin will see their winning combinations multiplied by however many Wilds appeared on that one reel. Unless more of another symbol also appeared on another reel, in which case the higher value is used.

In the same vein, there are three scatter symbols on Siberian Storm. Two of these are the same, but with different colors – one for the main reels and one for the bonus.

They may look different, but they payout at exactly the same rates. That is: 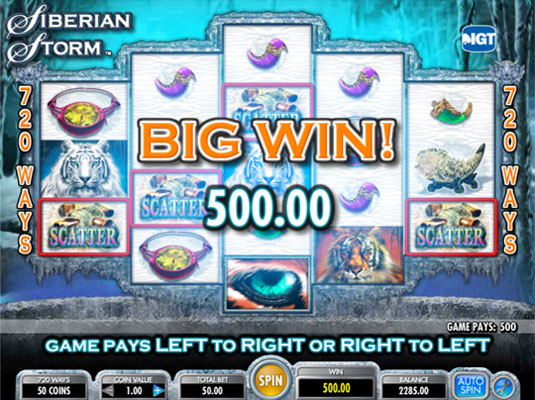 You could make a case for saying all Siberian Storm’s symbols operate kind of like scatters do on other slots as they don’t make paylines but instead pay out for a triple appearance (or above) no matter where they are on the reels.

However, we’ll keep it simple and say there are only three.

The third scatter here is the Tiger’s Eye symbol. Pulling five of these triggers the Bonus Free Spins round.

The only bonus round on Siberian Storm is a free spin one. There is a new set of reels, with the same icons but in different colors.

Pull one or more Tiger’s Eye symbols on all five reels to unlock eight free spins.

Should the winning combos include extra Tiger Eyes on each reel, however, then the bonus can start with up to 96 spins.

Free spins are paid out using the same bet and coin value that the player was using when the bonus was triggered.

More free spins can be unlocked by pulling a further five or more Tiger Eyes, up to a massive 240 possible free spins before the round ends.

To put it simply, high-rollers. If you want to play for upwards of $200 a spin, your options may be limited online.

Not so with Siberian Storm.

This slot will also appeal to you if you’re looking for something different and innovative, which this Multiway Xtra system from IGT certainly is.

There aren’t too many other titles using this system on the market. 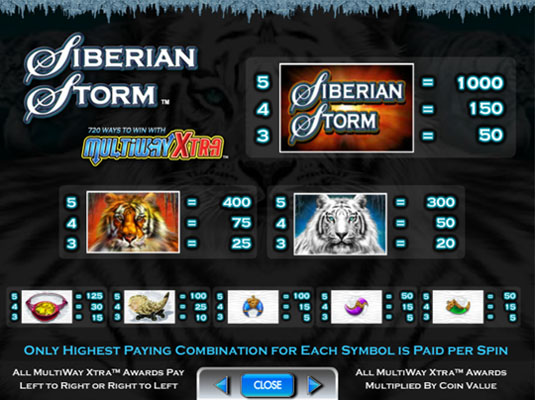 IGT were the main innovators of this system. Two other games that you can play online today that use this system are Star Trek: Against All Odds and Siberian Storm MegaJackpots.

That second title is a cousin of the original Siberian Storm slot but includes extra features and a progressive jackpot.

Innovative Mechanics: IGT’s Multiway Xtra system offers a different slots experience from most games. With more ways to win that on almost any other slot, most bettors will appreciate the big wins possible here.

If nothing else, it is refreshing to play on a slot that just looks very different from your usual five-reel 30-payline titles.

High-Rolling Bet Limits: $500 a spin should certainly be an attraction for the biggest budget players.

Big Wins Possible on the Main Reels: With no jackpot available, Siberian Storm does go some way to making up for that with the big potential wins.

Moderate Variance: All these unique mechanics make for quite a high variance slot. With the low end of the RTP being just that – very low – this may put off some dedicated players.

Not Many Extra Features: Siberian Storm has only one bonus round and no jackpots available. When compared with the big-budget pop-culture licensed slots at the top of the pile, that just isn’t enough to be highly competitive.