Shadow of the Panther Slot Review

Shadow of the Panther is a jungle-themed slot from High 5 Games. It was launched for online play in 2011.

This title revolves around a mysterious jungle man with a deep connection to panthers. Besides the interesting theme, Shadow of the Panther offers a few worthwhile features that spice up the action.

Shadow of the Panther takes place in a dark jungle. The transparent reels display a first-person view of something looking through the jungle leaves, which we assume is a panther lying in wait.

The backdrop concept is good, but there are too many leaves blocking the broader jungle view.

The symbols feature solid detail and do a great job of portraying the theme. They include a wild icon, gold panther statue, jungle man, black panther, leopard (technically a panther), tree-climbing leopard, sapphire, emerald, ruby, A, K, and Q.

Most of the symbols offer entertaining animations when forming wins.

Here are a few examples:

This slot doesn’t feature a soundtrack during the main game; it merely plays generic music when the reels are spinning.

The sound effects during winning payouts are original. Examples include the panther roaring, the jungle going crazy, and robotic sounds for the futuristic-looking symbols. 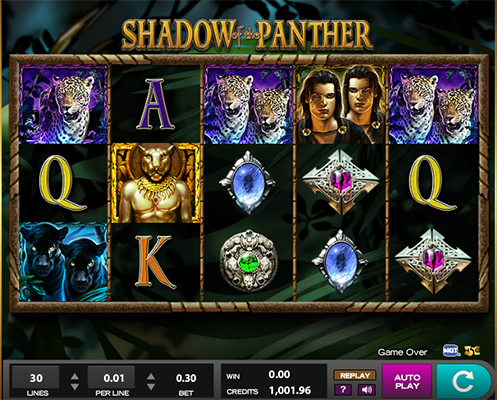 This slot offers different betting options for the free and real-money modes. Both versions allow you to adjust paylines from 1 to 30.

Autoplay is available in both the free and real-money versions. It lets you keep the reels spinning automatically for 5-25 spins.

Replay allows you to rewatch the last spin. This option is perfect for recording or simply reliving them.

The Return-to-Player (RTP) for Shadow of the Panther is 94.9% – slightly below average. The volatility is on the higher end, which surprised us given features like double symbols and Super Stacks.

The largest available prize in real-money play is $100 and comes through five wild symbols and a $0.10 line bet. One hundred dollars is incredibly low for a maximum prize.

What jackpots are available in Shadow of the Panther?

This slot doesn’t offer a jackpot. Its top payout is 1,000x, which is small compared to what other games feature.

The top prize is further limited by the fact that you can only bet $0.10 per line. Most slots with low top payouts at least let you wager $1 or more per line.

Shadow of the Panther doesn’t give you much of a chance to win big. Luckily, it offers some features that can boost your payouts.

The game logo is a wild symbol that substitutes for everything except the gold panther statue to form wins. 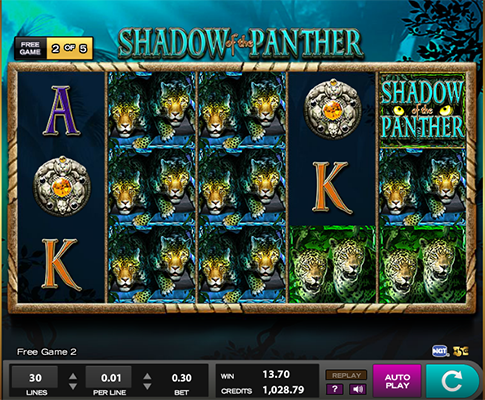 Some symbols can appear as either single or double icons. The latter counts as two symbols within a given space.

The jungle man, black panther, climbing leopard, and walking leopard can all appear as double symbols. They form wins featuring anywhere from three to ten icons.

A Super Stack refers to a reel full of the same symbol. Shadow of the Panther features three spaces in every reel, which means three icons appear in each Super Stack.

Symbols are chosen randomly to serve as Super Stacks in each round. It’s possible to fill all five reels with a single icon.

The gold panther statue is the scatter symbol. It only appears in reels two, three, four, and five. This icon doesn’t form any payouts by itself.

The player receives free spins whenever the gold panther lands five or more times anywhere on the reels. The number of free spins depends on how many panther statues trigger the bonus.

Here are the different possibilities:

The background changes to a slightly more animated look during this bonus. We feel that this backdrop looks better than the main game’s background.

Music plays during the free spins, too. This tune almost sounds like it belongs in a spy movie rather than a jungle-themed slot.

Who is Shadow of the Panther ideal for? 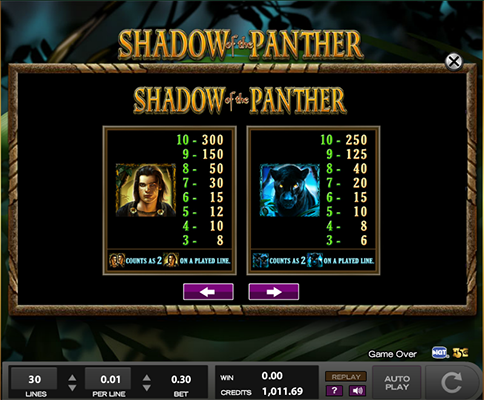 Those who appreciate an interesting theme should also like this game. It combines jungle and supernatural elements to create a unique story.

Any player who wants the chance to win big should avoid Shadow of the Panther at all costs. This game only offers a 1,000x top prize and a $0.10 maximum bet per line.

She-Wolf and Jaguar Princess are two more High 5 slots that revolve around humans having a magical connection to wild animals.

Jaguar Princess is almost the same game as Shadow of the Panther. The lone differences include the female lead character and a more visible jungle setting.

She-Wolf deals with a woman who’s related to wolves. This game boasts superior graphics and animations compared to Shadow of the Panther and Jaguar Princess.

Cool theme: This slot showcases a jungle-dwelling man who has the powers to communicate with panthers. The futuristic-looking gems and godlike panther statue add another layer to the story.

Low bets: Virtually anybody can afford to play this game. The minimum bet is just one cent per spin. Players can use all 30 lines for only $0.30.

Nice animations & symbol graphics: Shadow of the Panther isn’t a visual masterpiece, but it includes quality symbol graphics, such as the man, panther, leopards, and gems. It also features entertaining animations during wins. 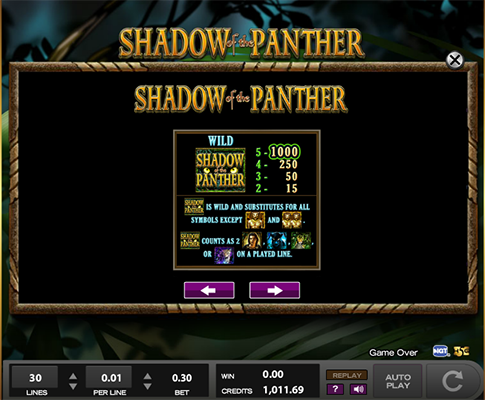 Tiny maximum win: The 1,000x top prize is already low enough compared to other games. The $0.10 maximum line bet further compounds matters. These aspects combine to create a $100 maximum win, which is as low as it gets.

Obtrusive background: The jungle background graphics don’t look bad. However, the leaves take up most of the backdrop, preventing a larger view of the landscape. Fortunately, a bigger jungle view is featured during free spins.

Fairly high volatility: Shadow of the Panther isn’t the worst slot we’ve seen regarding high volatility. However, we were surprised by the number of dry spells we experienced. After all, this game offers Super Stacks and double symbols, which typically deliver lots of prizes.