Shadow Diamond is a 40-line, five-reel physical casino slot from Bally Technologies. Bally may have been making casino slots for over 60 years, but this is a thoroughly modern title.

Themed around jewels and precious stones, Shadow Diamond is shiny but relatively easy to play. It includes only one bonus round but comes with various Wild stacking and mystery reels features.

In many ways, Shadow Diamond doesn’t feel like most other Bally slots and instead plays more like a system from IGT.

The visual theme here is diamonds, jewels, and other luxury items. Shadow Diamond’s symbols include diamonds on a ring, glittering watches, a man in a suit and shining necklaces, as well as other precious stones such as topaz rocks, amber, and sapphires.

Occasionally, one symbol clumps together on a reel and becomes a larger animated picture, which can span across all five reels on rare occasions, filling up the whole screen with one sparkly image.

Although it looks great, there isn’t a lot of depth to this theme.

Shadow Diamond’s soundtrack is passable piano elevator music. While not particularly inspiring, it’s suitable as backing track when spinning the reels. The sound effects are your standard casino fare, such as ringing bells and cashing sounds.

There’s nothing wrong with these choices, but they’re not the most innovative or exciting sounds you can find in a Bally slot game.

Shadow Diamond includes 40 lines and five reels. The betting starts at $0.01 per line, or $0.40 per spin. It goes up to $0.10 per line, or $4 per spin. This is not very high for a Bally casino slot, and it’s even less impressive compared to most of their online selection.

However, penny slots players will be satisfied with this title as the lowest bet is a penny per line.

Players are also unable to customize their bet per line or use auto spins when playing Shadow Diamond. These two features aren’t common to all slots, but they are great extras, and experienced slots fans might feel shortchanged without them.

Only two symbols, the Wild and the mystery woman, pay out more than you bet when you pull five of them on the reels. 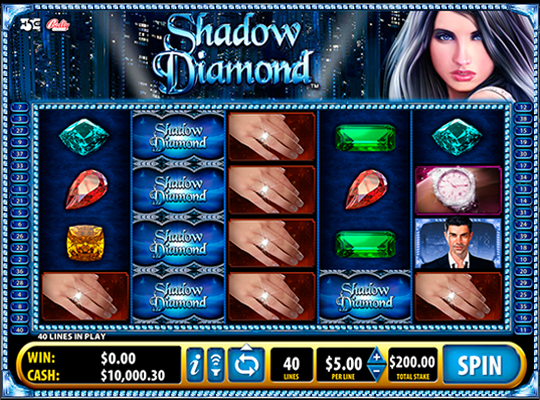 Shadow Diamond does not offer any jackpots. Wilds can cover the whole screen on the main reels and during the bonus round, which can lead to some big wins; however, these prizes do not compare to most jackpots.

In today’s slot environment, a title lacking a signposted big-money jackpot is not good enough to interest a significant number of players.

There’s only one bonus round on the Shadow Diamond slot, which is a basic free spins round with extra wilds. This isn’t great compared to many modern slots that include four or more additional rounds of content.

The reels here use the Mystery Reels feature as well as a few types of Wild scatter. This is a system more common among other slots developers.

The Wild Symbols are Shadow Diamond text icons. They are standard Wild symbols; they count for any other symbol in a winning payline, except for the free spins bonus diamonds.

The Wild Symbols can randomly appear across entire reels as part of the mystery stack reels feature. This means they also have the potential to appear across the entire screen and all paylines, resulting in a very big win.

There are three types of scatter on Shadow Diamond:

The Mystery Reels can appear on any spin and cover the entire reel with one of the other symbols. As mentioned, this can happen to Wilds, and it can cover the whole screen with one symbol.

The Shadow Diamond grants players access to the game’s bonus round. Simply pull 12 or more of them on one spin (which is only possible through the Mystery Reels) to trigger the bonus. 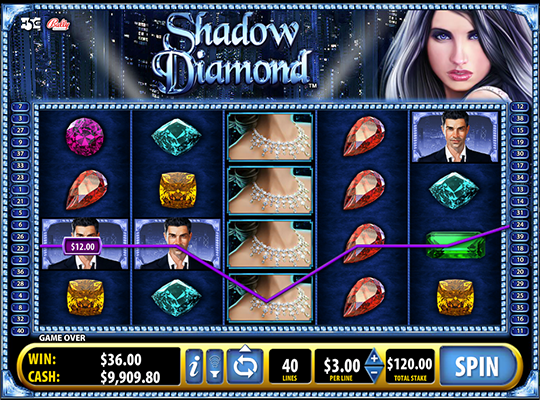 Shadow Diamond’s bonus round is a Free Games Bonus Feature. It offers players a 7 free spins on the main reels.

Before play begins, however, a diamond symbol must be chosen to reveal one of five symbols:

Each stacked mystery reel that appears during the free spins is the same symbol that was selected before the round started.

This makes filling up the screen with one particular symbol, which is the fastest route to a big win on Shadow Diamond, much easier.

Unfortunately, players can’t win any additional free spins during this round to extend their run.

Overall, the bonus round isn’t the most exciting or valuable compared to other slots on the market.

According to the game’s promotional literature, Shadow Diamond is aimed at women.

Penny slots and casual players may enjoy Shadow Diamond as it is one of the simplest titles out there and carries a low minimum bet.

Everyone else, however, could be put off by the low base game payouts and lack of a big money jackpot.

The most experienced players should be able to go through most of what this game has to offer in a few sittings. They may also rue the absence of an auto-spin feature.

Other glamour-themed slots from Bally include Betty Boop, Shadow Princess, and Moon Goddess.

Shadow Princess shares Shadow Diamonds’ superficial theme. It also includes images of a similarly sultry woman with flowing hair who stares out of the cabinet trying to lure players in. 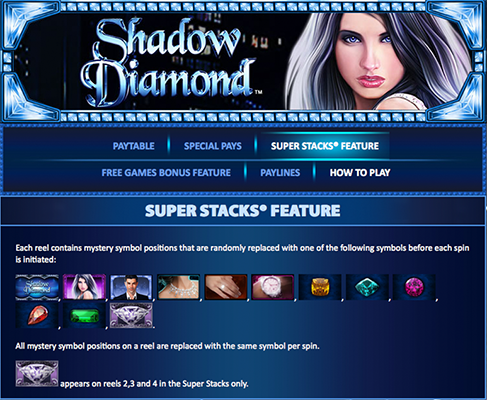 Simple Mechanics: Shadow Diamond features only one bonus game. With just two scatters on top of that, it shouldn’t be hard for even the newest of slots players to get a grasp of the gameplay.

Penny Per Line Bets: This title is great for low-budget players or those looking to try the slot out before investing more money.

Low Base Game Payouts: Although the Mystery Reels and Wild scatter make things a little more interesting, most of the symbols here do not pay well – even upon pulling five of them in a line. This is probably because the Mystery Reels give more opportunity for multiple line wins, but in our opinion, that doesn’t make up for the game’s low base payouts.

No Jackpot: The absence of a jackpot is always a downside in a slot title, especially one with a low maximum bet.

Cookie-Cutter Theme: Shadow Diamond’s theme falls flat. There aren’t too many extra animations, video scenes, or anything to give this game the hook that makes top-tier slot game.