Konami Games originally introduced Rawhide in 2005 and has since redesigned it as a more modern slot. The game’s graphics portray the Wild West, but the slot also features newer technology and multiple denominations options.

Many of the features in Rawhide are standard, such as wilds and scatters. The “action stacked symbols” bring new life to the Old West, and the K2V platform allows this long-time fan favorite to remain popular.

There’s a new sheriff in town – actually, a marshal – and he watches over the Rawhide game. The background is set in a deserted, unclaimed land.

Symbols include the covered wagon, an old-fashioned windmill, and a bag of gold coins. Even the nines, tens, jacks, queens, kings, and aces have a cowboy-boot-styled font.

The marshal’s badge pops up as the scatter and can trigger free games, but the reward poster featuring a blonde woman in a cowboy hat serves as the wild symbol.

There is no music, which would have given the online version more of a Western feel.

However, there are some sound effects that bring the game to life, notably the sound of a stampede. The visuals also shake when you hit a big win. 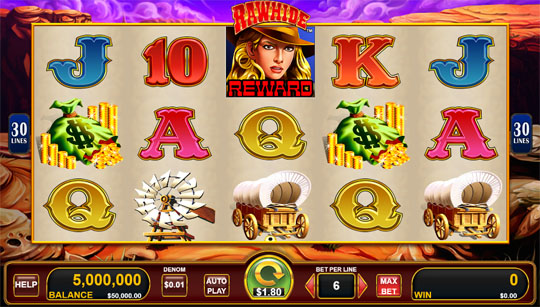 The marshal badges are the scatter symbols, with payouts beginning at two matching badge symbols. Three of the scatter badges trigger ten free spins, four badges warrant 15 spins, and five scatters give you 25 free spins. All wins during the free spins bonus round are awarded at 2x their regular payline amount.

Rawhide does not offer a jackpot. Even so, the max bet is high enough that hitting a significant payline – while using a high denomination and five or six betting lines – could earn you $180,000.

Rawhide is one of the few Konami Games titles that don’t offer any unique features. The free spins are the most exciting part of the game, with wilds and scatters also producing thrills when you place them correctly. 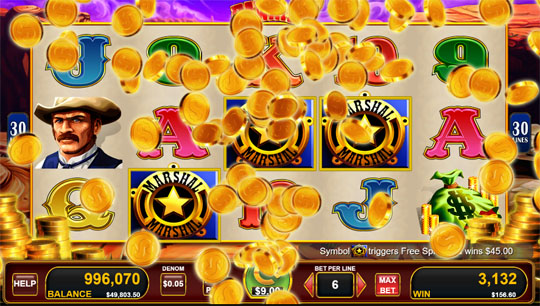 The fugitive with a reward for her capture is the wild in Rawhide. She appears on the second, third, fourth, and fifth reels, and she can substitute for any symbol except the marshal’s badge. When she helps make or strengthen a payline, she becomes animated and is seen on a wild horse.

The marshal may be the highest-paying symbol in Rawhide, but his badge is the scatter symbol and triggers the free games. Three badges take you into the bonus round with ten free spins, four badges earn you 15 free spins, and five badges will trigger 25 free spins. All wins are paid at 2x during the bonus round.

Badges also pay significantly if they appear on multiple reels, as five reels containing badges earn you 500 credits, or more if you’re playing with increased bets per line or higher denominations. Those payouts are awarded separately from the wins in the free spins.

You can win ten, 15, or 25 free spins, based on the number of badge symbols that appear. During the bonus rounds of spins, you can win even more free spins if more badges appear. All wins during free spins are paid at two times their regular payline amount.

Anyone with a fondness for the Wild West will be drawn to the graphics in Rawhide. You may recognize the name and attach it to the black-and-white television show that aired in the United States from 1959 to 1966 and starred Clint Eastwood. However, you will soon find this game is not licensed and has no affiliation with the Rawhide of TV fame.

Many long-time slots players will recognize Rawhide as it has been a staple in online and live casinos for more than a decade. The recent upgrades incorporate modern features. 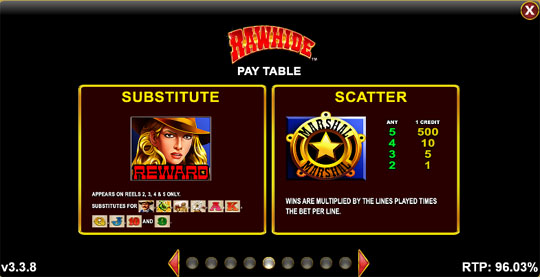 The wide range of coin denominations and payline combinations make the game a good fit for low-stakes players as well as ones with significant bankrolls. The lack of special, unique features that would make this game stand out from others may be a disappointment.

The long-time popularity of Rawhide as a casino game has spawned many different versions of it, all available from Konami Games. The most popular associated titles are Rawhide Bonus Ladies and Rawhide Marshal’s Bounty.

Other titles from Konami that play on the same Western theme include Western Saloon, Riches of the West, and Sheriff’s Reward.

Fun theme: The theme of the Wild West is a fan favorite, conjuring up images of local marshals and fugitives, bags of gold, and wagons on cross-country journeys. The symbols and graphics bring those images and stories to life on the screen.

Betting range: The most conservative players can play for a long time at $0.30 per spin or move up slowly by tight increments and denominations. High-rollers can also risk a lot on each spin at $180. Rawhide attracts a wide range of players.

Free spins: Waiting for the marshal badges to appear and offer free spins is the highlight of the game, and the number of free spins is greater than in many other games. Some games offer as few as five free spins, while Rawhide begins at ten and gives more spins with each additional badge. 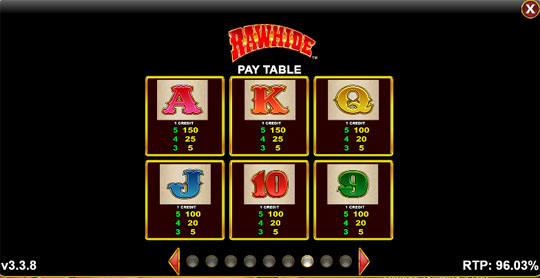 No special feature: Many casino games offer some kind of unique or special feature, such as a bonus round choice of credits, spins, or a multiplier. Rawhide missed the mark by not including any extra way to earn payouts or increase wins, which is something to keep you more engaged for a longer period of time.

No branding: You may see the Rawhide name and expect a branded game based on the television show, but you would be disappointed with the lack of familiar characters or even the widely-recognizable theme music.