WMS was founded in 1996 as a slot machine developing spin-off from pinball company Williams Manufacturing. They have been developing hit machines for the US casino market for many years. In 2013, they were acquired by the Scientific Games family.
Raging Rhino uses a 4096-ways-to-win structure, forgoing the usual slot paylines system.

Raging Rhino is themed around the African savannah and the iconic wild animals that live there.

The reels feature an interesting visual addition. They start out smaller, and during a spin, they enlarge slightly to fill up the whole screen.

This animation is done smoothly and looks nice. It also removes all the extra information on the screen so players can concentrate on the spin’s outcome.

There are only six symbols here that fit the theme – the rest are made up by the standard slots’ icons Q, J, K and the numbers eight to 10.

The themed icons are:

The last symbol is an unidentified mammal – we aren’t sure what it’s supposed to be. A slots player experienced in African zoology might have better luck than us identifying this animal.

Raging Rhino’s music is a passable African-style drum track, with added animal sound effects such as monkey calls and big cat roars. It was decent enough to leave playing in the background but didn’t really push the envelope in any way. 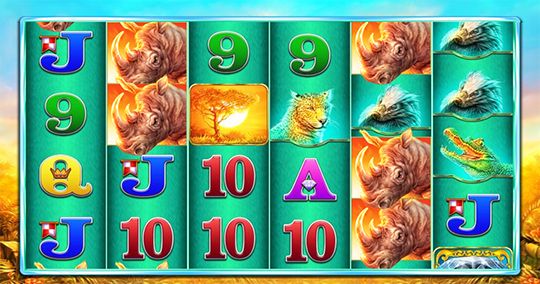 This means there are no traditional paylines here. Instead, all the symbols act like scatters – they don’t need to fit on a particular payline to form a win.

Winning combinations come from two or more symbols on consecutive reels, starting from the left.

For example, you can pull three or more of a symbol on reels four, five, and six but not get a win because they didn’t start on reel one.

Bets on Raging Rhino start at $0.40 and go up to $60 per spin. As there are no traditional paylines, bet per-line adjustments are not available.

Regardless, this is a decent bet range that should suit the majority of players. The most high-rolling players, however, might be disappointed with the relatively low max bet.

One thing we should point about this game is the updating paytable, which was very refreshing to see.

The majority of slots show prizes as a multiplier of the maximum or per-line bet, and it’s left up to the players (or reviewers like us) to calculate the prize on offer in each case.

That isn’t the case here. Raging Rhino’s paytable automatically updates to show the prizes available at the selected bet. This shows laudable transparency from WMS and something other developers could definitely take hints from.

Raging Rhino’s Return-to-Player (RTP) is set at 95.91%. This puts it firmly in the middle tier of online slots regarding estimated long-term returns.

There are no dedicated big-money fixed or scaling prizes on Raging Rhino.

Some big wins are possible at a maximum bet, though – for example, $60,000 for pulling five Feature Diamonds.

However, this doesn’t make up for missing out on a signposted big-money prize like those offered by the multi-million progressives at the top of the market. 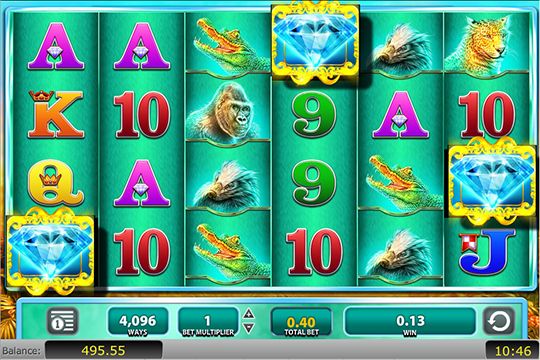 Raging Rhino offers a relatively limited range of features compared to the top slots on the market. There’s one free spins bonus game and no extra features such as scattered or stacked Wilds.

There’s only one Wild Symbol here, which is a Savannah Tree at Sunset. It acts as a standard Wild symbol – it substitutes for any other symbol to form a winning combo.

There’s only one scatter symbol here, although all the symbols sort of count like scatters do in other slots.

The main one is the Feature Diamond. Pull three or more of these to get a cash payout and unlock a free spins bonus round. They pay the following:

This gives a top prize of $60,000 at a maximum bet – the biggest prize you can get from any one combination on Raging Rhino.

The only bonus round here is the free spins round that’s triggered after pulling three or more Feature Diamonds as described above.

The free spins are played on the same reels with the same bet level that was in use when the bonus was triggered.

Some Wild pulls during the free spins turn into 3x or 5x Wilds that multiply any winning combos they are part of by that amount.

Players can extend their run by pulling a further three or more diamonds on any free spin. This will give five, eight, 15, 20 or 50 more free spins depending on how many diamonds were pulled.

Unlike most slots with free spin rounds, Raging Rhino’s paytable information doesn’t state how many free spins you can get in one round. We can only assume that it is potentially unlimited. 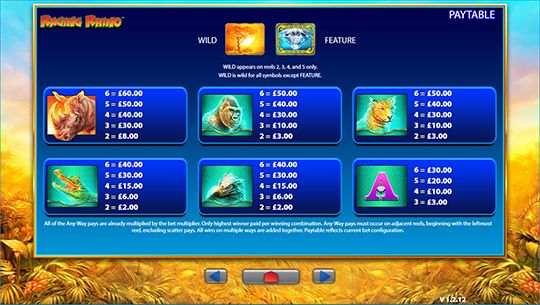 Raging Rhino is relatively simple, without too many extra features and symbols. This means it should appeal to newer or less experienced players who are still getting to grips with slots.

This game may also appeal to more experienced players who are looking for an alternative to the usual payline system offered by the majority of slots.

Some similarly animal-themed games from this American slot developer include:

Novel 4096 ways-to-win system: For those who want a simpler design or are tired of the complicated 40-line-plus slots that are standard nowadays, Raging Rhino’s system might just be a breath of fresh air.

Updating Paytable: A rare feature that players (and reviewers) can easily gain a lot of value from as it saves a lot of time in calculating potential wins.

Potentially Unlimited Free Spins: The potential to extend your free spins round to ridiculous numbers – should the reels be with you – is a nice feature. You’re extremely unlikely to get above a few dozen extensions, but you never know how your luck might go. 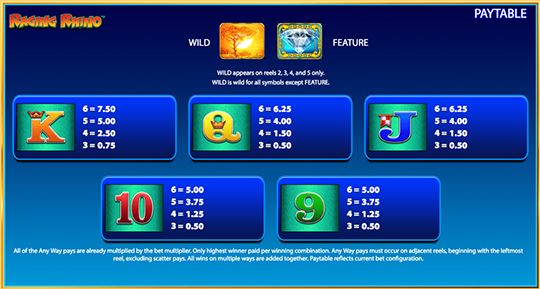 No Auto-Spins or Lines: Lacking the line structure means Raging Rhino loses some potential for customization. Auto spins will always be important to some players, so we will always note when they are missing.

Smaller Range of Features: Raging Rhino has only one bonus round and lacks the extensive range of features common to many modern slots on the market. This could be good for a few players, but many will experience everything this game has to offer in just a few sittings.