Quick Hit Platinum is a 30-line five-reel slot from Bally Technologies. It combines classic casino slots gameplay with the potential for massive prizes of up to $750,000. This means anyone who’s played slots before should be instantly familiar with the vibe of this retro title.
The Quick Hit series has included some of Las-Vegas-based Bally’s most popular titles over the past several decades. The Quick Hit symbol can even be seen in some of their other games that aren’t part of the main series.

Quick Hit Platinum is a classic American-style slot – think golden bells, bars, cherries, and blazing hot 7s. Even the edges of the game are designed to look like an old-school slot machine that you might have found on the playing floors of the Bellagio or the MGM Grand in 1998.

The theme is not original – but it doesn’t need to be. However, the music in this title is a letdown. Only the free spins round music was passable.

The bonus round, where you choose from a grid to determine how many free spins and what multiplier you get, features borderline unlistenable music.

As for the main reels theme, it’s extremely simplistic. We know Quick Hit Platinum isn’t a big-name music license, but it certainly feels like Bally could have put more effort into this one, especially seeing as the gameplay and graphics, while not ground-breaking, are entertaining enough.

In Quick Hit Platinum, players choose their stake per line, which then adjust an overall bet. The number of lines cannot be changed. However, the lines are superimposed on the reels after a win. This is always good to see, especially for inexperienced or new slots players.

Bets range from $0.01 per line, or $0.30 per spin, all the way up to $5 per line, or $150 per spin. This should keep penny slots and mid-to-higher-tier budget players happy. The very highest-budget players might want a little bit more room to work with on their maximum bets, but the potential for 5000x payouts should partly make up for that shortcoming.

Unfortunately, Quick Hit Platinum also lacks an auto-spin feature. In a retro-themed slot that doesn’t boast too many other features, this is a big miss.

Lastly, the RTP (Return-to-Player) on this title is 94.06%. That’s on the lower end of Bally’s slots and hardly makes for Quick Hit Platinum’s biggest attraction. 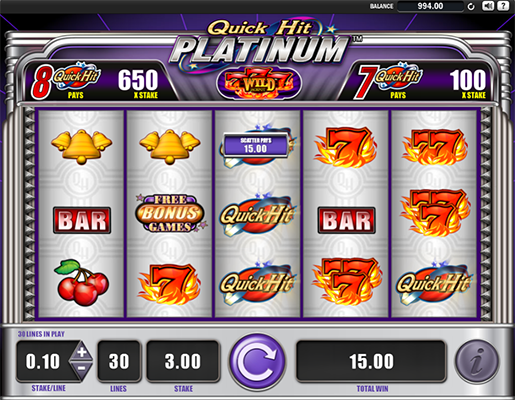 There is only one officially labeled jackpot here, but there are plenty of big prizes available on the reels.

A player wins the jackpot when they pull three or more Wild Jackpot symbols on a single spin of the main reels. As the name suggests, these also count as Wild Symbols, which means it is possible to win the Jackpot, plus a few winning lines on top. The jackpots are scaling and go up as follows:

At the maximum bet of $150 a spin, this could mean a $12,500 prize. Not too shabby, but definitely not comparable to even middle-tier slot jackpots.

The real top prizes on Quick Hit Platinum, however, are not labeled as jackpots – even though they are two of the biggest prizes you can find in a Bally game. These are:

Quick Hit Platinum Symbols pay out when a player pulls three or more of them in one spin. Pulling three pays out 2x the player’s stake. Pull five of them to receive a massive payout of 5000x the stake. This can go up to $750,000 at the maximum bet – now that is a big jackpot.

The other Quick Hit symbol pays out upon pulling three of them too, but it starts at only 1x the player’s bet. The remaining payouts are:

This does not reach the levels of a Quick Hit Platinum symbol win, but it is still a generous $300,000 prize on a maximum bet of $150.

Why Bally didn’t label these features as Jackpots is beyond us as that is what they are in all but name. However, the name of these prizes shouldn’t make a difference for players who win them. 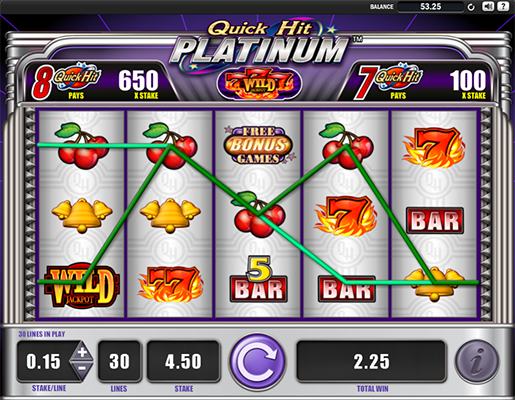 There’s a relatively low number of extra features, scatter, and bonus rounds in Quick Hit Platinum. Aside from the aforementioned three Jackpot scatter symbols, there’s only one more scatter and two different rounds of a free spins bonus game. It shouldn’t take too long for an experienced player to see everything this game has to offer – excluding winning the top jackpots.

There’s only one Wild Symbol in this title – the Wild Jackpot symbol we discussed in its section above.

Aside from the Jackpot-in-disguise Quick Hit and Quick Hit Platinum prize symbols, there is only one other scatter symbol in this game – the Free Bonus Games icon. Pull three of these in any one spin of the main reels to unlock a two-step bonus round, which we will describe below.

Upon pulling three of the Free Bonus Games symbols, you’re launched into a pop-up screen that contains 20 covered squares. Click on any one of them to reveal your number of free spins and a win multiplier to go with it.

Then, move onto the next square until you’ve pulled three of the same option. This launches the second part of the bonus, where you get the corresponding number of free spins, and each win is multiplied by the given number.

There are six different possibilities you could pull:

There is a potential for big wins at the higher numbers of free spins. We clocked in at just over $500 over the 15 free games when we won a solitary go at this bonus game during our playtesting.

All free spins are played with the same bet per spin as when the bonus feature is triggered. You can also pull further free spins symbols to extend your round, up to a maximum of 50 spins in one go. 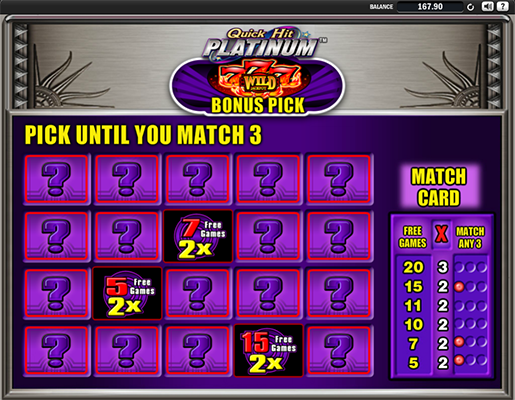 Quick Hit Platinum has a low limit, a classic feel, and relatively simple mechanics – this makes it an excellent choice for less experienced or penny slots players.

More experienced slots fans may run through most of the features quickly, and higher-rolling players will miss the auto spin feature. The potential for truly big wins, however, may keep players interested for a little longer than this title would otherwise.

Quick Hit is a popular series of land-based casino slots from Bally that has been running for a long time. Consequently, there many similar slots available, many of which even share the exact same symbols and comparable music.

Massive Prizes: With a potential $750,000 on offer through Quick Hit Platinum, this is one of the only Bally titles with big-money payouts that can stand up some of the progressive jackpot titles on offer from their competitors Microgaming or NetEnt.

Familiar & Comfortable Theme: Regardless of whether you like the style, you know exactly what visuals you’re getting with a Quick Hit series slot.

Simple to Play: This title only features one bonus round and three scatter symbols, as well as clearly labeled paylines. Even the most newbie of slots players should be able to understand what’s going on here. 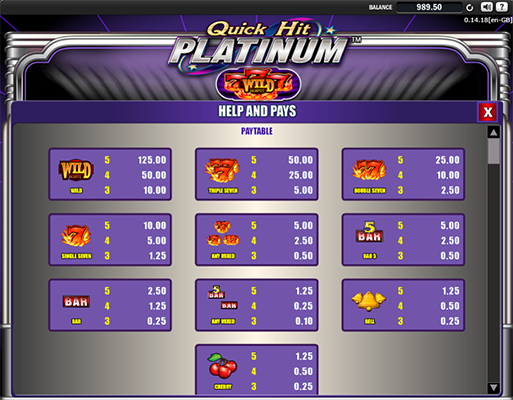 No Auto Spin or Payline Customization: The abovementioned straightforwardness also means Quick Hit Platinum sacrifices some functionality that might be appreciated by more experienced and dedicated slots players.

Bland Music: This title’s music felt uninspiring at best and annoying at worst. If you enjoy simple bleeps and bloops, you may not mind it. However, even compared to some of Bally’s other retro-themed slots, Quick Hit Platinum’s soundtrack is weak.

Not a Huge Range of Extras: Although the simplicity may be appreciated by some players, fans who know their slots won’t find many unique ideas in the gameplay. Short of winning the jackpots, it shouldn’t take long to see most of the features this game has to offer.