Queen of the Nile Slot Review

Perhaps the most striking aspect of Queen of the Nile’s dated look and feel is the uninspired background. Despite the proliferation of Egyptian themed slot games on the market, there are plenty of original and aesthetically appealing images that could be featured on the slot game interface. Instead, the game screen sports a plain brown background with only a hint of a hieroglyph in the corner.

Queen of the Nile is over 20 years old so we can cut it some slack; however, the console design would have been lackluster even when it was first released. The rest of the graphics like the reel numbers and symbol designs are more appropriately retro, as expected. We can’t fault the game for that, given that Aristocrat intentionally kept the online version of the game authentic to the original casino slot game. The game console design, symbols, payouts, and features are all the same as the original casino slot game, with zero upgrades made for online players.

The reels are filled with Egyptian symbols including Cleopatra, the Queen of the Nile herself, whose image graces wild symbols that are the highest paying symbols on the reels. Win a whopping 9,000 credits for a five-of-a-kind Cleopatra combination on a one-credit bet. All winning combinations completed with a Cleopatra wild symbol are doubled (x2) as well.

Egyptian pyramids are scatter symbols that trigger the free spins bonus game. King Tut’s gold mask and gold bangle bracelets are the highest paying regular symbols, followed by gold Scarab beetles, and the Eye of Horace and Egyptian flowers. Generic playing card symbols ranging from number nine cards up to aces are also mixed in as the lowest paying symbols on the reels.

The game design and reel layout remain the same throughout the game, and free spins are played on the same reels as the base game. The sound effects include strikingly retro Atari-style sounds, loud buzzers, and unexpected tribal background music with some Egyptian flourishes.

The payout values are not updated in the game when you change your stake. You’ll need to multiply the values in the paytable by the number of credits you want to play to see the payouts for higher bet levels.

The “Auto Start” button sets the reels into perpetual motion instead of a defined number of auto spins. You must click the Auto Start button again to stop the reels, which can make it easier to run down your balance. The auto spins also can run fast, making it difficult to see the total win on the screen before the next spin starts.

The RTP (Return-To-Player) percentage for this game is 94.88%, which is roughly average compared to other Aristocrat games.

Like the original Queen of the Nile casino slot game, the online version of this slot, unfortunately, does not offer any jackpot options. 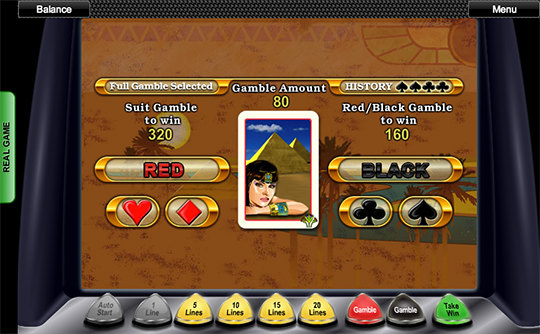 Queen of the Nile offers minimal bonus features in the base game including wild multiplier symbols and a gamble feature. The main action is in the free games feature, which awards free spins where all wins are tripled.

The gamble feature is activated after each winning spin. You can skip it and continue to spin the reels, or you can gamble your win on a face-down card. Guessing the card color correctly doubles your win and guessing the card suit correctly quadruples your win. You can collect your total new win or keep gambling it up to five times. An incorrect guess means you lose your total gamble amount, including your initial win, and the Gamble feature ends.

This game is ideal for fans of the original Queen of the Nile casino slot, given that the online version is identical, as well as fans of Egyptian and Cleopatra themed slots. It could also appeal to retro slot lovers and beginners that are looking for an easy game to play with straightforward features. 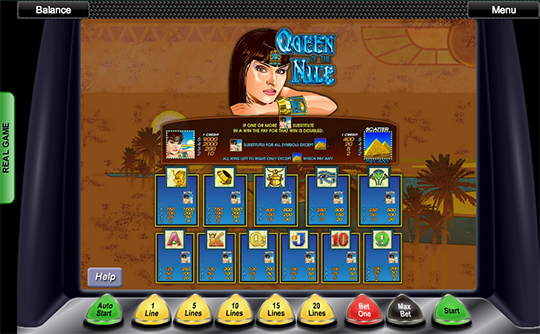 Free Spins Bonus Game – The Queen of the Nile free spins bonus game can be lucrative thanks to triple payouts (x3 multipliers) on all wins. Retriggers on 15 spins can also add up.

Multipliers – Wild symbols double the wins during the base game and all wins are tripled during the free spins bonus game. These multipliers can make the wins in this game much more interesting.

High-value Symbols – The payouts for four or five Cleopatra wild symbols are surprisingly high, helping to make the payout potential in the base game more enticing.

Authentic Retro Casino Slot – Fans of the Queen of the Nile casino slot and retro slot lovers should appreciate this authentic online version of the original game.

Easy To Play – The options and features are simple enough for beginning players.

No Jackpots – No chance for big jackpot wins can be a turn-off.

Limited Bonus Features – Most bonus features are focused around the free spins game bonus, which basically awards free spins on the same reels as the base game (with multipliers), and there are no interactive bonuses.

Fast Auto Play – The auto spins run fast and the win counter is often interrupted by the next spin.