Pompeii, originally a land-based casino slot game by Australian developer Aristocrat, has been a long-standing player favorite on casino floors worldwide. This online version of Pompeii is a perfect replica of the casino game, brought to the online reels. The game design, symbols, bonus features, and even sound effects are authentic to the original casino game.

The Pompeii theme is relatively unique in the slots world; we were hard-pressed to find another popular Pompeii-themed slot game online. Like other Aristocrat slots, Pompeii offers retro style and simple gameplay that is perfect for fans of the casino game and beginning players.

Aristocrat’s Pompeii slot transports you back in time to find your fortune before Mount Vesuvius erupts and the city is devastated. The reels, encrusted in classic Pompeian mosaic titles, feature symbols depicting life in the ancient Roman city like Roman helmets, chariots, and gold coins. The Pompeii skyline lies behind the reels with Mount Vesuvius looming in the background.

Golden amulets are the highest paying symbols on the reels, with five-of-a-kind paying out 2,500 coins. Golden Roman helmet symbols also pay out handsomely at 2,000 coins for five matching symbols. The symbol values decrease from there, with standard playing card symbols paying the lowest values on the reels.

The sound effects in Pompeii are similar to other Aristocrat slots; with clacking reel spins and retro arcade style sounds. When big wins land on the reels, Aristocrat’s signature calliope music plays, which seems out of place with this game’s theme though.

Unique to the Pompeii slot, when Mount Vesuvius wild symbols are part of a winning combination, the volcano erupts with a simple animation and loud blast. When one gold coin scatter symbol lands on the reels, a voice calls out, “Veni!”.

It took us some time to figure out what the voice was saying. It didn’t make sense until we hit three scatter symbols on the reels, and the voice called out, “Veni, Vedi, Vici!” (one word called for each scatter symbol), which is the famous quote by Julius Caesar that means, “I came, I saw, I conquered”.

The minimal and retro sound effects are true to the original slot game but can be dated and tedious relative to current standards. Unlike some other Aristocrat games, no background music accompanies the free spins during the bonus game. The five reel, three-row (5×3) game configuration and the game interface remain the same throughout the game, and free spins are played on the same reels as the base game. 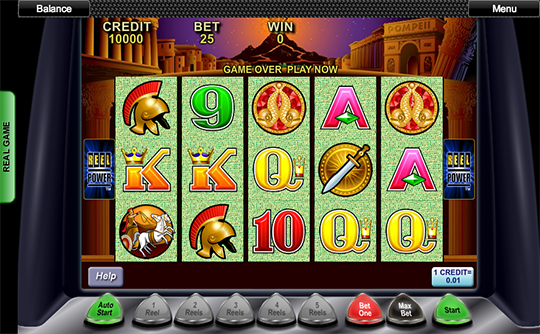 You won’t find any paylines on these reels as Pompeii is one of Aristocrat’s slots that feature their innovative “Reel Power” feature with “ways to win” instead of individual paylines.

Matching symbols do not need to land on preset paylines but instead can land anywhere on adjacent reels (starting on the leftmost reel). On five reels, 243 “ways to win” provides players with more chances at hitting winning combinations compared to Aristocrat’s games that offer a maximum of 50 paylines on five reels.

The in-game paytable is static, representing one-credit bets only. Payouts on one-credit bets range from five credits, for two nine-card symbols, up to 2,500 credits, for five golden amulet symbols. The pay table will not update as you change your stake, but you can multiply the paytable values by the number of credits you’re playing with to calculate potential payout totals.

Top paytable values (for five-of-a-kind combinations on a one-credit bet):

The Auto Start button starts the reels, and they don’t stop spinning until you press the button again. It is not possible to pre-select how many auto spins to play. Be alert as your balance status and the time in between spins can change quickly.

The RTP (Return-to-Player) percentage for this game is a solid 95.45%, which is a bit above average compared to other Aristocrat games. 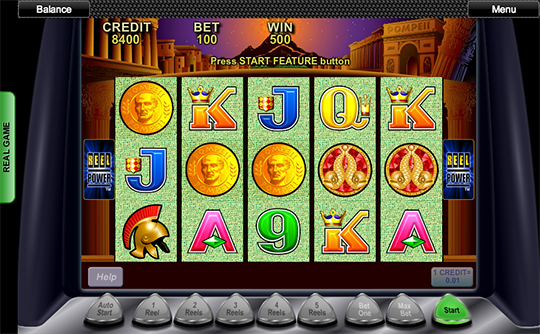 Pompeii spin-off slot games on casino floors may offer jackpot options, but unfortunately, the original Pompeii casino slot and this online adaptation do not offer any jackpot options.

Most of the action in Pompeii takes place in the Free Games Feature that awards free spins and multipliers. Otherwise, the feature selection is limited.

After any winning spin, continue spinning the reels or gamble your win to double or quadruple it. Guess the color of a face-down playing card to double your bet or guess the card suit to quadruple your bet. Cash out any time or gamble up to five times. If any guess is wrong, you’ll lose the current total gamble amount. 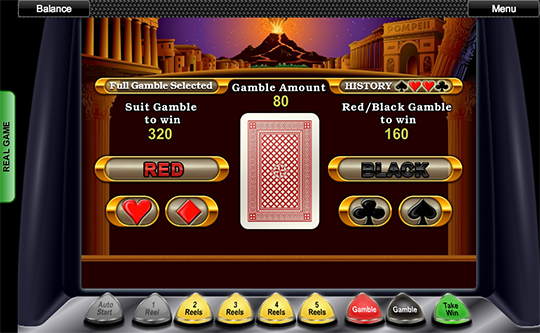 The online version of Pompeii is ideal for players who like the original casino slot game, considering that they are identical games. The simple, retro game design and basic bonus features also make it an easy game to play for beginners.

Free Spins Bonus Game – Win 10, 15, or 20 free spins with wild multipliers on the reels, plus get a chance at retriggers.

Easy To Play – The game interface and features are simple enough that anyone can play.

Gamble Feature – Gives players an option to enhance wins in an otherwise monotonous base game with limited features. 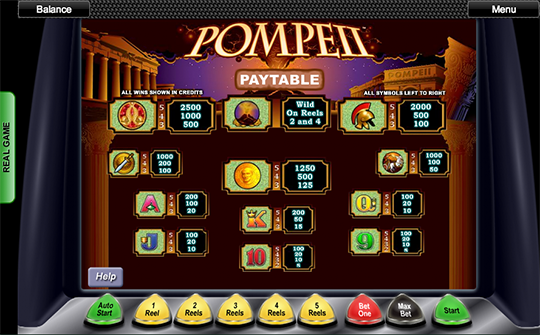 No Jackpots – The original Pompeii casino slot doesn’t offer jackpots, but some players may be disappointed that no jackpots were added for online players.

Limited Bonuses – Despite the multipliers in the free spins bonus game, the bonus features are sparse compared to newer online slot games.

Dated – The retro design and animations are very basic and dated looking, with outdated sounds that don’t help.

Win Totals – The win counter is not prominent compared to more current games. It can be difficult to see the total win and there are no visual effects to celebrate a big win. The coin fountain win effect in Aristocrat land-based slot games is missing from the online versions of the games (in free play mode).