Michelangelo is a five-reel, 99-line slot based on the famous Italian artist Michelangelo di Lodovico Buonarroti Simoni. High 5 Games launched this slot for online play in 2010.

Born in 1475, Michelangelo is arguably the greatest artist of all time. He was skilled at sculpting, painting, architecture, and poetry.

This game focuses strictly on his sculptures, including iconic works like David, Leah, and Moses. While this authenticity is nice, the game as a whole doesn’t quite live up to the legend himself.

This slot doesn’t win any points for its atmosphere. The green background looks like reptile scales, and the black reels clash terribly with the backdrop.

The symbols are a mixture of sculptures, letters, and special icons. Basic symbols include an “M” (for Michelangelo), A, K, Q, wild, and free-games icon.

Sculpture symbols include David, Mose, and Leah. These are replicas of Michelangelo pieces and serve as one of the game’s few bright spots.

Every winning combination triggers an animation. These animations are merely different variations of symbols flashing and disappearing.

Michelangelo doesn’t feature a soundtrack during the main game. A generic tune plays while the reels spin.

The sound effects aren’t anything special either. They only serve to represent the symbols flashing and vanishing during wins. 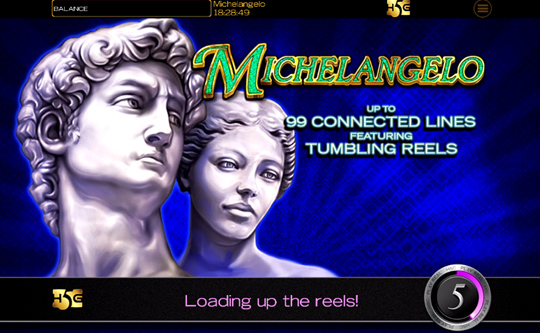 Michelangelo includes five reels and 99 lines. The lines are fixed in the free mode, but the bet per line can be adjusted from $0.01 to $2. These options create a betting range of $0.99 to $198.

Autoplay isn’t available in this slot. Instead, you need to manually spin the reels every time, which can get tiresome.

Turning the sound on and off is possible. However, this is a basic feature that’s available in nearly every slot.

This top payout is incredibly low compared to what’s available in other slots. The second-highest win is only worth $100 for five David symbols.

Michelangelo’s volatility is high. The 99 lines seem arbitrary because you win so infrequently compared to other High 5 slots.

What jackpots are available in Michelangelo?

Michelangelo doesn’t offer a jackpot, which is unfortunate considering the lack of big prizes and low bet threshold.

The 5,000x win is solid for a top non-jackpot prize. However, it doesn’t pay much due to the small maximum bet per line. 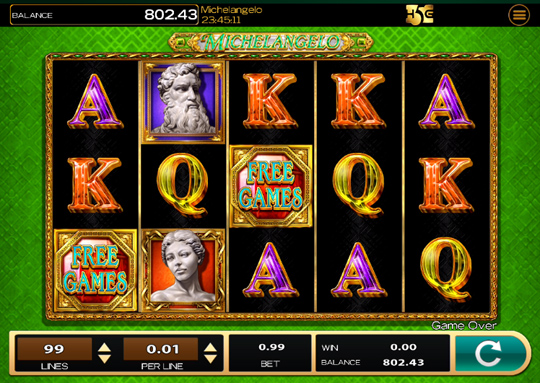 This game may not include any big prizes, but its features can lead to large overall wins. Most notably, tumbling reels can deliver multiple payouts in a single round.

The wild icon substitutes for everything except the free-games icon to form wins. It doesn’t, however, create any winning combinations by itself.

This symbol only appears on reels two, three, and four. Free spins feature an extra wild icon, which can land in reels one, two, and three.

The free-games symbol is the scatter symbol. It only appears on reels one, two, and three.

This icon’s lone function is to trigger free spins; it doesn’t form any payouts by itself.

All symbols from winning combinations disappear in this game. Symbols from above fall down into the empty spaces.

The game then re-evaluates the lines for new winning combinations. Tumbling reels continue in this fashion until no more payouts can be formed.

We highlighted the lack of large prizes earlier. However, tumbling reels can lead to big winning rounds in the case of multiple payouts. 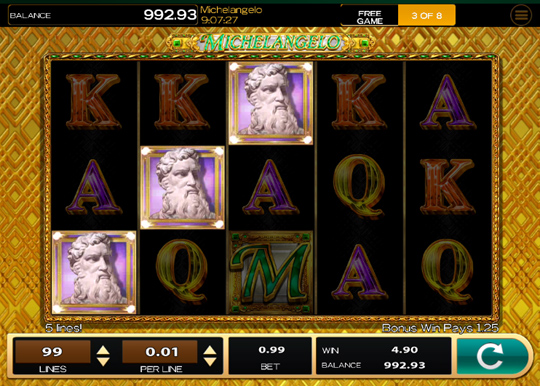 Here’s an example of how this process works:

This method of awarding free spins is confusing. Most slots simply offer a set number of free spins (e.g., ten) for three scatter symbols landing anywhere on the reels.

The bonus round features a golden background, which looks far better than the main game’s green backdrop.

An uptempo, Renaissance-style beat plays during free spins. This is the only point in the game that features a soundtrack.

Who is Michelangelo ideal for?

This game is strictly for low rollers who don’t mind playing for small payouts. The $0.01 minimum bet ensures that players of all bankrolls can enjoy Michelangelo.

Anybody who wants to chase big payouts or win frequently should avoid this slot. Most players will consider the combo of a low top payout and high volatility to be a nightmare.

Those seeking aesthetically pleasing slots won’t appreciate this game either. Its background and reels present an ugly color scheme that’s hard to look past.

High 5 has designed a large line of games involving artists, including an entire series dedicated to Leonardo da Vinci — Michelangelo’s artistic rival throughout his career.

Double Da Vinci Diamonds and Van Gogh are both comparable to Michelangelo. Each game includes authentic works from the artist it represents.

Genuine sculptures: Art fans will appreciate David, Moses, and Leah appearing on the reels. David and Moses look just like the sculptures they depict.

Low bets: Real-money mode allows bets ranging anywhere from $0.01 (one line/$0.01 line bet) to $9.90. We don’t recommend playing just one line due to the high volatility, but the betting options range is still nice.

Fun free spins: Free spins are a highlight in this game thanks to the music and different background. This bonus also offers two wild symbols that boost the chances of forming wins.

Ugly background: Michelangelo features a green, scaly background that contrasts horribly with the pure black reels. The awful backdrop is ironic considering that this game is based on a man of incredible artistic tastes.

High volatility: Ninety-nine lines imply frequent wins. However, Michelangelo might as well include ten lines due to how inconsistently it pays. The tumbling reels likely affect the infrequent wins per round.