Michael Jackson: King of Pop is a five-reel, 25-payline slot from Las Vegas’ Bally Technologies, a developer well-known for producing traditional and video slot terminals at US casinos for over 70 years.

Players can now enjoy Bally’s slots online as well, including this premium title, which brings together jackpot-slot action with the most iconic elements of Michael Jackson’s 45-year career as one of the most popular recording artists of the 20th century.

If you’re a fan of slots and Michael Jackson’s music, then there’s not much room to go wrong with the style here. Michael Jackson: King of Pop is a great tribute to the legendary singer, featuring MJ iconography and the official studio versions of some of his biggest hits, including:

That’s quite a list of classic pop tunes by itself, let alone as a soundtrack for a slot game.

The attention to detail in this title is spot-on. Even the bonus rounds are themed around hit songs, and an animated MJ dances across the screen to add a bunch of Wild symbols to the reels during occasional spins.

The standard symbols used by Bally in this title include Jackson’s signature hat, gloves, and sunglasses as well as his dancing shoes. Other than that, the game features standard slot number and letter symbols.

If you weren’t a fan of Michael’s music or persona, then there are probably better games out there for you. However, if you have no qualms about the man’s music or are a big fan, then this game should offer you a lot to enjoy visually and thematically. 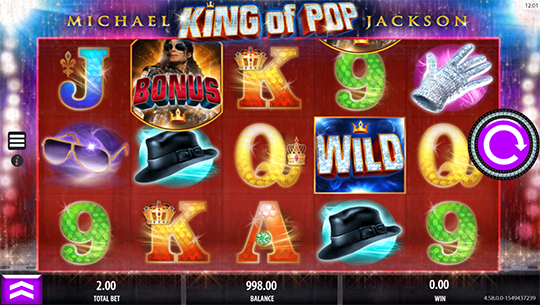 Michael Jackson: King of Pop slot includes 25 paylines. Unfortunately, players can’t adjust what paylines to bet on and instead can only bet a total amount between $0.40 and $80. This isn’t the highest maximum bet you can find in a Bally slot, and high-rolling players may consider it too low.

There’s no auto-spin functionality here either, which may be another drawback for the most dedicated of players.

However, the game makes up for these shortcomings with its relatively high RTP, or Return-to-Player, of 96.04%. That’s on the higher end of Bally’s slots range and should suit most players.

There is only one jackpot in Michael Jackson: King of Pop, and it is available through normal reel spins as well as free spins. Pull two or more of the five possible jackpot symbols on the reels to bag a multiplier on your maximum bet. The multiplier goes up the more symbols you pull.

At the maximum bet, pulling five jackpot symbols in a spin nets you $200,000.

Unfortunately, this title’s paytable does not auto-update to display the jackpot value. Instead, you may have to calculate it yourself, though it’s not too hard.

At the highest bet, the jackpot is worth $200,000. With a potential prize of that size, we can see why Bally limited bets in this title.

There is only one way to claim the jackpot, which is slightly lower than in some other games from Bally. However, it is a worthwhile flagship prize. 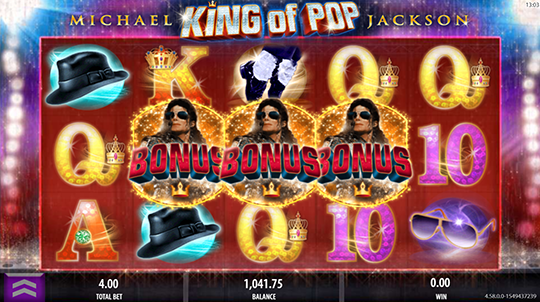 There are many additional features and symbols in the Michael Jackson: King of Pop slot, with three different bonus rounds on top. Two of the bonus rounds are themed around hit MJ songs from the 80s and include clips from official videos as well as the audio tracks playing in the background.

This isn’t the most feature-packed or complex slot title out there, but it certainly provides a decent array of extras that offer more than most.

The Wild symbols here are just that – your standard Wild symbols that count in place of any other symbol when forming a winning line. However, there are two different ways in which many of them can appear on the reels.

At a random point throughout the game, on a spin that doesn’t win anything else, an animated MJ may moonwalk across the reels, dropping Wild Symbols in his wake. This animation was exciting to see the first time it happened during our playtest, and it is one of the best Wild scatter features you’ll find on a Bally slot. You also get 2x your win on any lines formed by this feature.

The second way in which Wild symbols appear is not as visually interesting but makes up for it through the possibility of big wins. In this feature, which is also randomly activated on a non-winning spin, two whole reels become Wild symbols. This means a dozen or more potential winning lines are possible.

There are two types of scatter in Michael Jackson: King of Pop slot:

We already discussed the jackpot symbols in their section above. The bonus symbols appear only on reels two, three, and four. Pull three of them in a spin to unlock a Bonus Wheel Round. 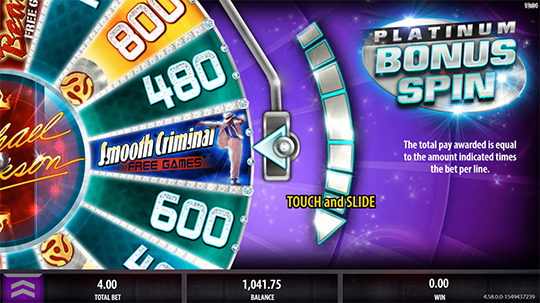 The Bonus Wheel Round offers one spin of the wheel. The prizes include multipliers, multipliers with another spin of the reels, and two bonus games. The multipliers start at 10x the player’s maximum bet and go as high as 1500x.

The two extra bonus rounds accessible during the first Bonus Wheel Round are:

Each game gives ten free spins of the main reels, plus some extra Wild symbols. The round also includes a short clip of the associated classic song’s video, and the audio track plays in the background during your spins.

All together now: “You’ve been hit by, you’ve been struck by…”

During the Smooth Criminal Free game, two of the five reels always remain Wild throughout your spins, although they do alternate in position.

During the Beat It Free Game, any Wild symbols that appear remain in place for the rest of your spins.

These bonus rounds allow for some big wins during free spin rounds. However, the Jackpot and Bonus symbols are disabled during these free games.

This game is perfect for Michael Jackson fans. If you’re a follower of the King of Pop or even just enjoy the nostalgia that his classic tunes offer, you may fall in love with this slot.

In terms of slot mechanics, this title offers a decent selection of bonus features, a good RTP, extra symbols and a $200,000 jackpot. There is only one way to win the top prize, but other big wins into the hundreds of thousands are possible.

We recommend this game for casual-to-intermediate slots fans. The lack of auto-spin and the relatively low maximum bet of $80 per spin may put off the highest-rolling or most dedicated players. 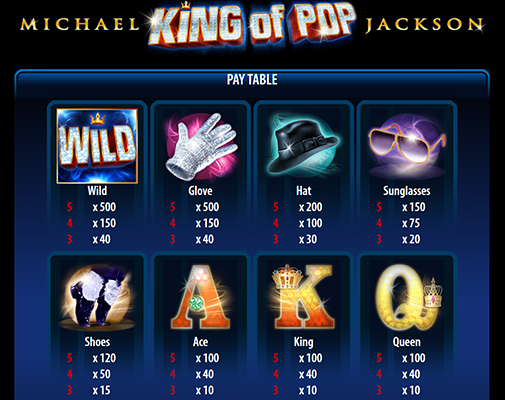 Massive License: When it comes to pop-culture licenses for slots, it doesn’t get much bigger than Michael Jackson. Featuring all of his trademark iconography as well as loads of official videos and music, Bally did an excellent job echoing the spirit of the late King of Pop.

Classic Soundtrack: We often single out overly repetitive or bland slot game soundtracks in our reviews, but that is certainly not the case here. With some of the most iconic 80s pop tracks of all time playing as you spin the reels, this is some of the best slot game music you’ll find on the market.

Decent Jackpots & Extra Features: A $200,000 jackpot is nothing to be sniffed at. Add to that a solid range of bonus rounds, scatter symbols, and other features, and you can see the effort Bally put into making this a complete slot title worthy of MJ’s name.

Low Maximum Bet: $80 a spin might seem like a lot to many players, but considering that a few Bally slots come with maximum bets of $400 or more, it’s easy to see why the highest-budget players might want a little bit more room to work with on their wagers.

No Auto-Spins or Payline Customization: These are two features that we always point out when they’re missing from a slot game. Bally missed a great opportunity to add some customization to this title.