Lucky Tree is a Chinese-themed, five-reel and 30-payline slot from Bally Technologies. Based in Las Vegas, Bally has supplied slots terminals to physical casinos across the US for many years. As part of the Scientific Games group since 2014, Bally’s slots are now also available for online players.

This particular slot might be well known to land-based casino players, with its distinctive oriental iconography and bonus structure.

Lucky Tree, as the name suggests, is themed around a twisting tree with golden coins hanging off its branches. These are the games’ Wild Symbols and, instead of appearing on the reels as they spin, they fall off the tree and onto the reels after every few spins. This is a nice visual touch that helps differentiate Lucky Tree from its competition.

The other symbols are your usual Chinese-themed-slot fare. Think porcelain cat statues, ornamental carps, lotus flowers, and Yin Yang signs as well the letters A, K, J, and Q. The music, as with most Bally games, is perfectly listenable but could do with some more variation.

The repetitive jingle of the Eastern instruments in the main theme gets old quite quickly, although the crashing symbols before the bonus rounds do break things up nicely.

One thing we have to point out is the invisibility of the lines. Many slots let players see all the pay lines available simply by hovering over the numbers at the side of the reels. Not so with Lucky Tree.

This can lead to some unexpected wins but also takes some agency away from the player’s experience in our opinion. 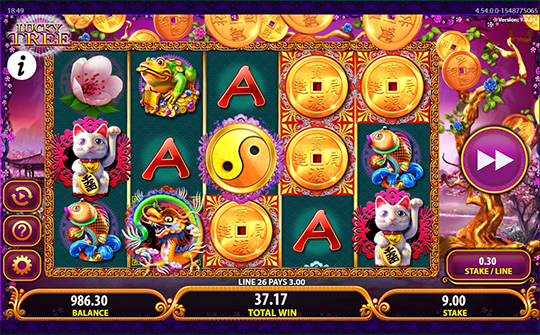 Lucky Tree includes five reels and 40 paylines. Players cannot customize how many lines they bet on and can only change their bet per line.

Bets start at $0.01 per line (or $0.30 total) and go up to $3 per line – for a total bet of $90 per spin. Hardly the highest-budget slot available. On the other hand, this means Lucky Tree does have a low end that’s good for penny slots and other more budget-oriented players.

Lucky Tree does, however, include an auto spin feature, which can be customized to run either 5, 25, 50 or 100 spins. Players can choose to have it stop on a certain amount of losses or a single win over a specified amount. Auto spin functionality is always a great feature to see, especially for more serious slots players.

Standard payouts on Lucky Tree are relatively good, with up to 10x the players’ stake available for matching 5 standard symbols. Pull five dragon Wild symbols and game awards 666 times the stake – making a £60,000 prize at a maximum bet.

Lucky Tree has an RTP, or Return-to-Player, of 96%. This puts it firmly in the middle ground of online slot RTPs.

Lucky Tree doesn’t offer any prizes labeled as jackpots. However, they do offer a prize of 666 times your bet on offer should you pull five dragon wild symbols. That certainly feels like a jackpot-level win to us, and we were surprised it wasn’t labeled as such.

Lucky Tree offers a good variety of Wild symbols and addons, including an interactive bonus round and extra animations and features on its free-spin rounds. There’s only one bonus round per se, but the additional Wild symbols that drop onto the reels during the Free Game rounds make it a bonus feature in its own right. 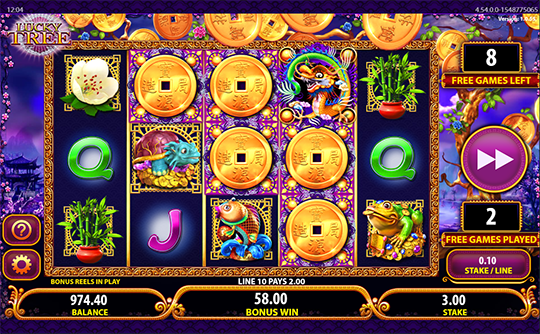 The Wild Symbols and scatter symbols here are combined. They are:

Lucky Tree’s Wild Symbols are standard – they swap for any other symbol in a winning pay line.

However, three of them also offer other prizes as scatter symbols. This means you can pull a winning line from them and then also unlock a bonus feature on top of that. For example, if you pull four wild dragons, you’ll win 100x your stake and any other winning lines created from it.

Wild Yin Yang and Wild Fortune Cats are just standard Wilds, until you pull three or more in one spin and they activate bonus rounds, which we will detail below.

Lastly, Wild Coins are special Wild symbols that drop off the tree and onto the reels randomly after any spin. Anywhere between two and seven can drop onto the reels, which can bag you a big win if they land in the right place.

These Wild Coins, however, do not count as scatter symbols to trigger bonus rounds by themselves – unless they fall on a Fortune Cat or Ying Yang symbol.

Pull three of the Yin Yang symbols to unlock a ten-spin bonus round. During these spins, Wild Coins drop off the tree after every turn of the reels. This pretty-much guarantees that a majority of the spins will be wins in some form. For reference, during about two-to-three hours of playtesting, we pulled this bonus spins round three times. Yin Yang symbols only appear on reels two, three and five.

The more profitable bonus round, however, is that of the Fortune Cats. Pull three of these lucky felines in one turn and a Pick Bonus round is unlocked. Choose one of three ceremonial jars to receive 6-12, 14 or 15 picks. A grid will then appear with one of five animal symbols – snake, monkey, lion, pig or cat – highlighted above it.

Simply click through the grid to reveal what’s underneath, with a different win on offer for each match you make with your designated symbol. The game ends when you have used up all your picks, with the 6-12 category ending randomly between those two numbers of picks.

The top prize here is $5,000, which is available for matching eight picks. We spun the reels on Lucky Tree hundreds of times without pulling this bonus game, so without knowing the exact numbers, we can tell you it is relatively rare. 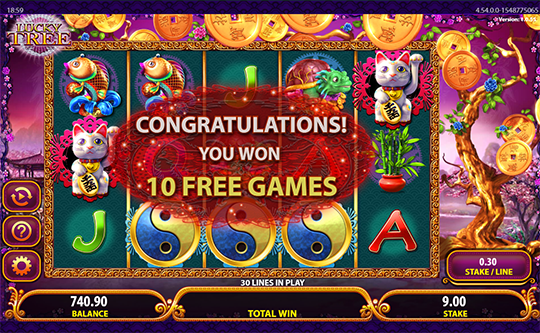 Lucky Tree has a good variety of unique ideas to keep even the most experienced slots fan happy.

Even after nearly four-to-five hundred spins we still hadn’t seen every feature of this game, which is always a sign that a title has a lot to offer. There’s also the big money prize available for pulling all five dragons, which isn’t labeled as a jackpot but certainly feels like one, and that should keep players coming back.

The relatively low maximum bet of $90 a spin may put off higher-budget players. On the other hand, the literally-penny-slot lowest bet should bring in other players – so it’s a trade off on this one for Bally. Overall, we’d say Lucky Tree offers a few features to attract everyone. However, it just might fall short of keeping the top players’ attention for a long time.

Chinese-themed slots are popular amongst players and developers. You’ll be able to find quite a few by any developer, and Bally is no exception. These include:

Lots of Variety: There are eight different scatter and Wild symbols in Lucky Tree as well as the standard symbols. Add to that two different bonus rounds and their associated symbols, and you can see that this is a game that keeps things fresh even after long periods of play.

Jackpot but no Jackpot: With up to $60,000 on offer (at maximum bets) just for a normal spin of the reel, with no bonuses or wilds activated, Lucky Tree offers some good prizes – even if they’re not labeled as jackpots.

Auto spins: This is always a feature that we point out as it is very useful to experienced or high-budget players. There’s also a decent customization menu here, meaning you can tailor the auto spins to your liking. 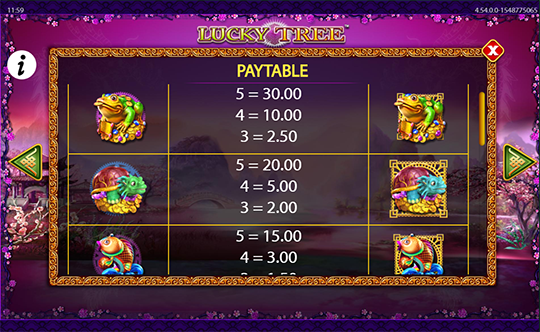 A little confusing: With the aforementioned eight scatter and Wild symbols on top of the standard reel icons, there’s a lot to learn when playing Lucky Tree. You could play this game for a relatively long time and still be seeing new symbols pop up. Not always a bad thing, but something that could be off-putting for more casual or newer slots players.

Fairly Low Maximum Bet: With a lot of slots titles having max bets up to $400 or more per spin, Lucky Tree’s $90 max is relatively low. It might not seem like that to a budget player, but it definitely matters when trying to reach the widest audience with a slot game.

Invisible Paylines: We’ve already outlined that there’s a lot going on in this game, and not being able to see your paylines (or change them) doesn’t help. Of course, a win is always a win. However, it’s nice to be able to see why you have won or where you might win in the future. Definitely a point for Bally to consider.