The original Lucky Larry’s Lobstermania slot proved a massive hit at physical casinos across the US, so it was only a matter of time before developer International Gaming Technologies released a sequel.

IGT has been developing slots for physical and online casinos for nearly 20 years. Lucky Larry’s Lobstermania 2 is just one of hundreds of slot titles in their collection.
This nautical-themed, 40-payline and five-reel game contains three scaling jackpots and seven different bonus rounds. That’s a lot of content by any developers’ standards.

Lucky Larry’s Lobstermania 2 is themed around lobster fishing. All the icons fit this idea well, and they include:

The remaining symbols are made up by the standard slot icons in the Lobstermania font, including K, Q, J, 9, and 10.

The bonus reels feature all the same symbols, except that the colors are changed to appear as if they were in the nighttime.

There are some decent animations on the main reels for pulling winning lines, but the main visual appeal here is in the bonus games.

All of them are incredibly well animated, will full visual actions such as a fisherman pulling bonus lobster traps out of the sea.

The music is not bad on the main reels, but the surf-rock stylings get repetitive after any more than a few dozen spins.

However, in the bonus round, extra lyrics are added to the song, giving some much-needed diversity. For a standard, unlicensed, slot Lucky Larry Lobstermania 2’s soundtrack is of very high quality.

There are a nice number of voice lines in the bonus games as well – enough to keep them from repeating in any one play session.

Lucky Larry’s Lobstermania 2 has 40 lines. However, IGT added another 20’s worth to your maximum bet in exchange for all the extra features on offer.

This is a top-level bet limit and as high as you’ll find on almost any slot game. High-rolling players should be very satisfied with what Lucky Larry offers.

Penny slots players might be disappointed though as the non-adjustable lines mean the minimum bet is fairly high.

There is also an auto spins feature on this title. Although, as with most IGT slots, it isn’t as customizable as those you’ll find on some other titles.

Players can only choose between 10, 20, 30, 40 and 50 spins. There’s no option to end on a big win or a certain level of loss, or any options at all other than the base number of spins.

This makes for a reasonable level of variance, but not a great RTP on the lower end.

Lucky Larry offers three scaling jackpots. This means they go up as your maximum bet does.

Any symbol can become a jackpot symbol if the jackpot border is added to it. Pull three to unlock the Light Trap jackpot and four for the Full Trap.

All five jackpot symbols are needed to win the top level prize.

$250,000 is not a bad jackpot by any means, but it can’t stand up to the big money progressive jackpots offered by competitor developers like Microgaming or NetEnt.

Still, you won’t be complaining if you win it.

That’s a strong range of features for any slot. When it comes to the list of extras, Lucky Larry’s Lobstermania 2 reaches the standard of many of IGT’s feature-packed big-money licensed pop-culture titles.

There are two Wild symbols here. Both operate as standard Wilds, in that they substitute for any other symbol if it will create a winning payline – except the jackpot icon.

One of them is a blue Lobster Mania logo and the other is an Orange version. They work in the same way, except the Orange version pays more.

Not bad for a Wild prize on a main reel spin.

There are three scatter symbols on Lucky Larry’s Lobstermania 2:

Jackpot symbols can occur on top of any other symbol. Pull three or more of them to win the relevant scaling jackpot, as described above.

Bonus Lucky Larry activates the bonus round. Just pull three of them, on any position of the reels, and you’ll enter the Bonus pick phase.

The Lucky Larry Bonus Night symbol you’ll only see during the free spins bonus round. Pulling three or more of one of these gives you an extra five spins extension on your bonus round.

Lastly, you can also get random multipliers on the House, Lighthouse, Boat and Buoy symbols. These can either be 3x or 5x and will multiply any winning lines made with those symbols by that amount.

When you unlock the bonus by pulling three or more Lucky Larry Bonus symbols anywhere on the reels in one spin, you enter the first stage of the round.

Here, you are required to choose between:

The Lucky Lobster free spins give you five spins of a bonus reel that’s the same as the main reels but at night – and minus the jackpots.

Pulling three more bonus symbols on a free spin gives you an extra five spins. The maximum amount before the bonus ends is 240 spins.

Free spins are played with the same bet as when the bonus was triggered.

Should you select Lucky Larry’s Buoy Bonus, however, you’ll first get a cash award of between 40x and 95x your coin value. This also multiplied by the amount of other winning lines (if any) you got when you triggered the bonus.

After selecting the Buoy Bonus, you’ll also move to a new screen where you can choose one of three games:

These are all themed around famous places in the world for lobster fishing.

Each stage gives you six buoys to pick from, and two to four picks.

After you’ve selected four buoys, the animated fisherman will pull up your chosen lobster cages from the sea.

Each cage picked will contain two to four lobsters that give cash prizes of 10x to 575x your line bet.

But that’s not necessarily the end of the bonus there. Pull the Golden Lobster from any of the cages, and you’ll unlock a further bonus round – depending on what stage you picked before.

Each of these is an animal-based pick em, with every pick rewarding between 200x and 1000x the coin value.

The Kangaroo Bonus has a maximum of 800x, the Octopus 1000x, and the Pelican 625x. Players keep selecting until they reveal another Golden Lobster instead of a cash prize – then the bonus ends.

This round could potentially lead to huge prizes, but any wins are capped at $250,000.

Anyone who is partial to feature-packed slots with a lot to experience and a great variety of symbols should enjoy Lucky Larry’s Lobstermania 2.

Likewise, high-rolling bettors should be pleased with this title.

We imagine the lobster fishing theme has a limited appeal amongst slots fans, but if you do happen to know about or enjoy catching the ancient lobsters as well as slots, you should love this game.

The obvious one here is the original Lucky Larry’s Lobstermania. However, because this sequel is the same but improved in most ways it would be hard for us to recommend the previous title.

For some similarly themed nautical games from this London-based developer, you can try Water Dragons and Ocean Magic. 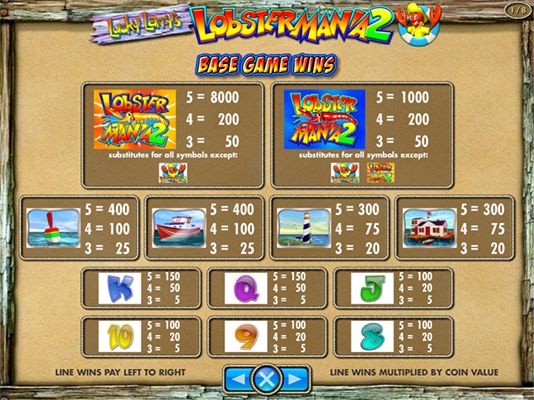 Massive Range of Features: There’s a veritable smorgasbord of features in Lucky Larry’s Lobstermania 2. No fewer than five different bonus rounds and a wide variety of other extras make this a stacked title.

Decent Jackpots: $250,000 is no prize to be sniffed at, and this game also offers decent prizes in other areas too.

High Max Bet: $300 per spin should suit high-rolling players nicely and is about as high as you’re going to get online.

Fairly Low RTP: The lower end of this slot’s variable RTP – 92.84% – is just not high enough for the most serious of slots players.

No Line or Auto Spin Customization: Two features that experienced players may miss, and ones we’ll always point out when they’re not available.