The Lion Festival video slot from Konami Games was so popular that a new version was warranted. That brought Lion Festival: Boosted Celebration into circulation, complete with updated software, brighter graphics, and more reasons for winning players to celebrate.

With a Balance of Fortune feature including the Super Free Game option, Lion Festival added many more reasons to keep playing. The bonus round may be a little hard to line up on the reels properly, but when it does, the choice of free spins or super free games are in the player’s hands.

Combine that with extra symbols in the third reel, as every frame offers two symbols instead of one, and Lion Festival: Boosted Celebration multiplies the excitement with each spin.

Lion Festival is filled with symbols of the Far East, mostly items that would be seen at an elaborate Chinese festival.

The gold coins, pink lanterns, bronze drums, and long kites are the most common symbols in the game besides the nine and 10, Jack, Queen, King, and Ace.

The pagoda-style Chinese house with fireworks in the background is the symbol that everyone wants to see, as it is the key to triggering free spins when it lines up correctly on the reels.

The lion’s head, which is the center of the festival, serves this game as its wild symbol, and its head enlarges and turns slightly when it completes a payline.

The lack of music during online play is noticeable, but the visuals make up for it, with the background showing fireworks or lanterns and all of the symbols illuminating the screen with their vibrant colors.

This five-reel game technically has 30 paylines, but the added double frames on the third reel increase the chances of winning, making it a 45-credit game at its core. Paylines start at the left reel and are highlighted upon a win, with only the highest win on each line applicable. 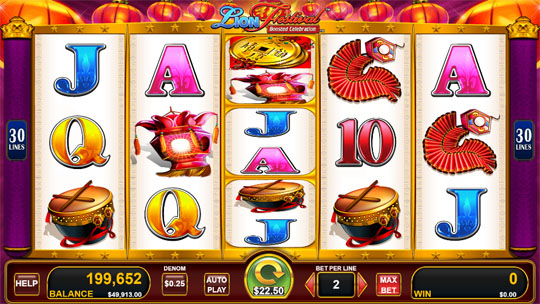 All wins are shown in currency, but players can view currency and credits simultaneously on the screen.

Of the many ways to win on Lion Festival, the top-paying symbol is the gold coin, which pays 1000 credits for five symbols. That creates the highest payout available, with the pink lanterns also solid at 500 credits for five reels. The trigger of the Chinese house only pays 100 per five symbols, but it launches players into the Balance of Fortune.

Payouts can be substantial in Balance of Fortune, whether players choose the entirety of their free spins or lesser super free games that pay at 7x, 12x, or 18x randomly. Regular free spins always pay at 2x.

The return-to-player (RTP) for Lion Festival: Boosted Celebration is 96.08%.

No. Even in the Boosted Celebration version of Lion Festival, there is no jackpot, though the right combination of symbols can easily pay into the thousands of dollars. 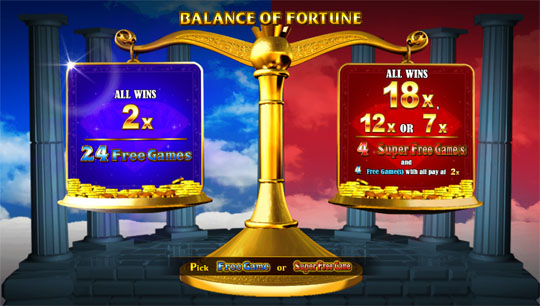 There are several features that make Lion Festival: Boosted Celebration a unique game, one that provides a selection of ways to win and something to watch for with each spin.

The lion’s head, which is the star feature of any Lion Festival, rightly serves as the wild in this game. It can appear on the second, third, fourth, or fifth reels and substitute for any symbol, including the Chinese house. And the lion silently roars from its frame when it completes a payline.

The house is the trigger for free spins, but the symbols must appear on the left-most reel and hit at least two subsequent paylines, as three in a row is the minimum to get to the bonus round. Three in a row trigger eight free spins, four of the symbols warrant 10 spins, and five of them equal 15 free spins. More of them on various paylines add more free spins.

All wins are 2x during free spins. And more free games can be triggered during the bonus round.

Before free spins begin, however, players must choose between the number of free spins won at 2x or the super free spin offer, which is part of the Balance of Fortune feature. 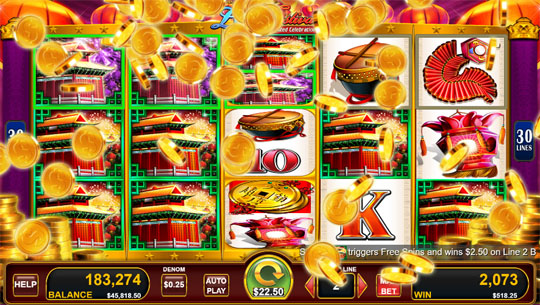 At any point during super free games, if at least five games remain, the player can click on the scale symbol to revert to regular free spins at 2x.

Many Lion Festival players are of Asian descent as they recognize the symbols and the power of the lion, which traditionally brings good luck and fortune. Lion festivals are used to celebrate new year’s and other celebrations in China, Vietnam, Korea, Tibet, Indonesia, Laos, and even Japan.

Non-Asian players are also drawn to the cultural brilliance and beauty of the symbols and the game.

The range of betting is limited, however. Low-stakes and mid-stakes casino game players enjoy being able to bet as little as $0.45 and choose from a few denominations, but the highest bet is only $22.50 and not generally enough to bring high-stakes gamblers to the game.

Many players do enjoy the auto-spin option on the game, so it is good for online players who like to multi-task and do other things while waiting for big payouts or bonus spins.

There are many games that feature the Chinese culture, and Konami Games offers a wide range of titles like China Mystery, China Shores, China Reels, China Dream, China Festival, and Lady China. 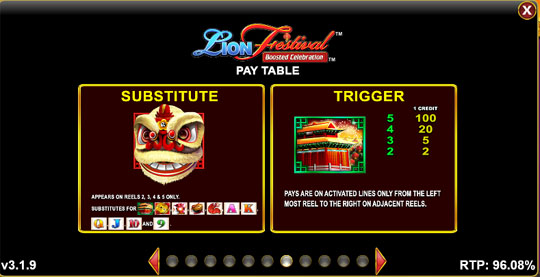 The most similarly-themed game from Konami is Lion Carnival, though The Force of 5 Lions is also in the same category.

For other games that use the Balance of Fortune in its bonus rounds, Mayan Chief and Quest for Riches are the most popular choices. The popularity of Balance of Fortune is prompting its implementation in more games, though, such as Rhino King, Roman Tribune, Hawaiian Shores, and Adorned Peacock.

Lions for luck: Some games seem to use cultural symbols in misunderstood and stereotypical ways, but Lion Festival gets it right. Lucky symbols are in line with true traditions, and players will enjoy seeing their favorite symbols line up for wins.

Name recognition: The Lion Festival brand has been in play since 2011 and become a familiar sight in casinos, both live and online. The Boosted Celebration offshoot has become even more popular in the last couple of years. And the Konami name lets players know that the game is one of quality.

Vivid graphics: The graphics in this game are bold, beautiful, and eye-catching. Players are mesmerized by the bright and detailed symbols that bring the Lion Festival to life. 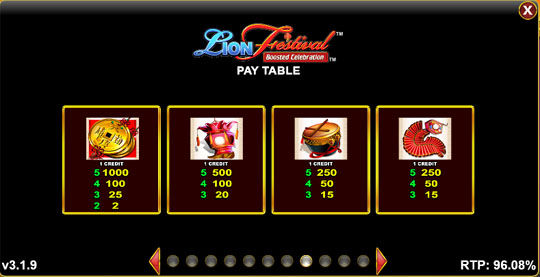 No high-stakes option: With denominations topping out at just $0.25 and only two betting lines as the maximum, high-stakes players will not find Lion Festival to be their game. The range of bets is fine for many players, but some want more choices.

No jackpot: While the coins and the free spins can add up to big wins, the lack of a jackpot or progressive connection can send players in other directions.

No music: The lack of music makes the game a bit tedious with spin after spin, though wins and bonus games break up the monotony.