One of the classic slot games in the WMS (Williams Interactive) series of Greek god-themed slots, Kronos has stood the test of time and remains a player favorite both at land-based casinos and with online slot players.

Inspired by the success of WMS’s Zeus slot game, Kronos provides a very similar retro gameplay experience with the same promise of up to 100 free spins. The graphics in Kronos are less dated, though, and the mighty Kronos symbols add some extra power to the reels.

Kronos (also known as Cronus), the mighty Titan who fathered the Greek gods including Zeus, commands these reels with his powerful presence. The most valuable and powerful symbol on the reels, Kronos symbols can pay both ways, with winning combinations that can pay from the left to right and from the right to left on adjacent reels, making for some unexpected, and unexpectedly big, payouts.

Kronos symbols can also appear on the reels as single or stacked symbols, and when stacked Kronos symbols are part of winning combinations, they transform into an image of Kronos standing strong, tall, and proud.

In the realm of the gods, beautiful blue skies and puffy clouds surround the deep blue reels filled with valuable mythical symbols like temple symbols, golden thrones in the clouds, ornate jewelry symbols, and the beloved Pegasus. Jewel-toned card suit symbols fill in as the lowest value symbols on the reels.

Sounds in the base game are minimal apart from the standard WMS reel jingles. However, the free spins game soundtrack plays like the score from an epic movie, adding to the feature’s excitement. 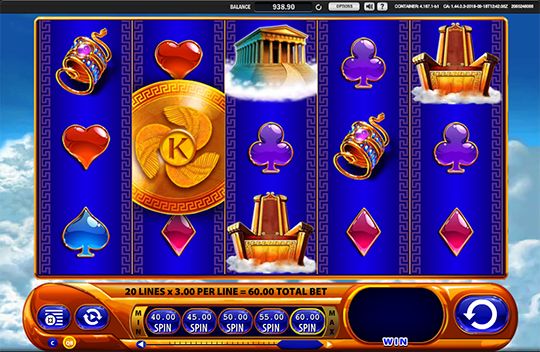 In the “Classic” view, you can change your line bet (Bet/Line) by increments of 0.01 with the up and down arrows. In the “Quick Bet” view, you can use the slider bar to select your Total Bet value.

The in-game paytable automatically updates to display the correct payout values for your current bet. Kronos symbols are the highest paying symbols on the reels, paying out $2,250 on five-of-a-kind combinations with a maximum bet and $7.50 with a minimum bet.

The diamond and club suit symbols are the lowest paying symbol on the reels, paying out $15.00 for three-of-a-kind combinations with a maximum bet and $0.05 with a minimum bet.

Autoplay options can be customized to automatically stop based upon the number of spins played, time played, win amount, stake, or changes to your account balance. Auto spins run at a comfortable pace, with all wins visible on the reels before the next spin starts. This feature can help ease the monotony of the game if you’re holding out for the free spins bonus.

Kronos offers a solid 95.94% RTP (Return-To-Player) percentage, which is average compared to other WMS games. 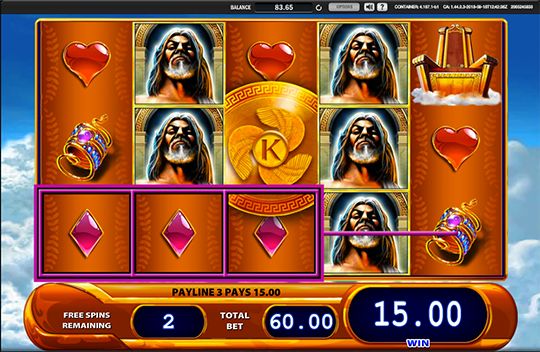 When stacked Kronos symbols are part of a winning combination, the symbols transform from Kronos’s head into an image of Kronos standing tall and proud. 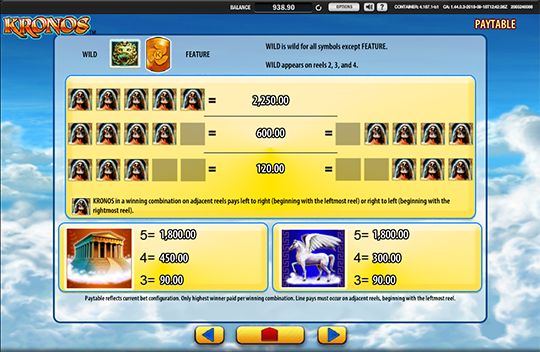 This online slot is ideal for fans of the (almost identical) land-based casino version of Kronos. It should also appeal to fans of the classic Zeus slot by WMS as the two games are quite similar, as well as Greek mythology enthusiasts in general. Retro slots players, slots purists, and beginning to intermediate players should also be a good match for this game.

Zeus is a similar game from WMS’s series of Greek god-themed slots. The graphics and animations in Zeus are more dated than Kronos, but the game features, imagery, symbols, and theme are similar.

Both games only offer wild symbols, special god symbols (Zeus or Kronos), and free spins bonus games on the reels. The free spins bonus feature triggers and awards are exactly the same in the two games and the winning combination payouts are similar, but Zeus symbols pay out higher across the board.

Zeus symbols are stacked symbols that cover the entire reels, whereas the Kronos symbols may or may not cover entire reels and pay both ways (from left to right and right to left). The RTP values are almost identical as well, with Zeus offering 95.97% compared to 95.94% in Kronos.

WMS released Kronos Unleashed as a follow-up game to this classic Kronos slot. Despite sharing the same theme and some common symbols and features, Kronos Unleashed steps up Kronos’ game considerably, boasting five reels with eight rows and 60 lines, a host of special features, and jackpots.

Lightning Re-Spins feature special symbols, Power Up bonuses, Jackpot bonuses, and extra rows can be added to the feature reels. Jackpot Reels award monetary values and five different jackpots that can pay up to 5,000x your bet.

Plus, there are guaranteed minimum wins for the free spins bonus game and lightning re-spin bonus. The RTP of Kronos Unleashed is slightly lower than Kronos at 95.86%. 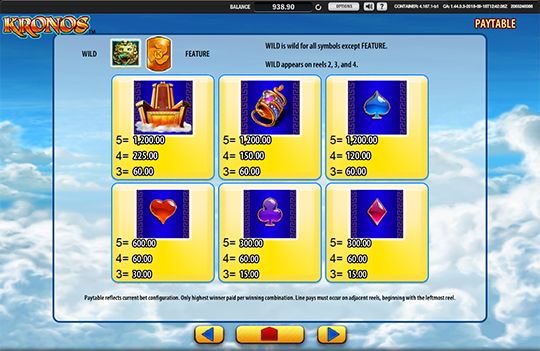 Kronos Symbols – The most valuable symbol on the reels, Kronos symbols are stacked and pay both ways on the reels (left to right and right to left).

Easy To Play – Simple features and bets make this game easy enough for beginners to play.

Monotonous Game Play – There isn’t much variety with so few features on the reels.

Limited Free Spins Features – Payout values are the same in the bonus game as in the base game, and there are no multipliers or added special features. However, wilds can be stacked, and the reels are a different color.