If you love safaris, you can join one on the reels of King of Africa by WMS. The slot game is about the African savannah, with the lion at the helm. Although the theme isn’t new, the creators have made a decent attempt at capturing the heart of the African jungle.

The reel features roaring lions, towering giraffes, and elephants, among other members of the African wildlife club. King of Africa is a five-reel, 20-payline game that comes with slot staples like free spins and wilds, as well as unique features like the Hot Hot Penny Re-spin.

King of Africa’s reels feature most, if not all, the wild animals and symbols you would expect to encounter in an African jungle.

They include zebras, impalas, leopards, lions, and elephants. You will also see spears, trees, necklaces, and a King of Africa logo.

The game has a soundtrack to match the theme perfectly. As you spin the reels, you will hear a tribal tune that is almost the same as the one heard in the hit Disney movie The Lion King.

The game’s interface also has an expansive savannah plain behind the reels. 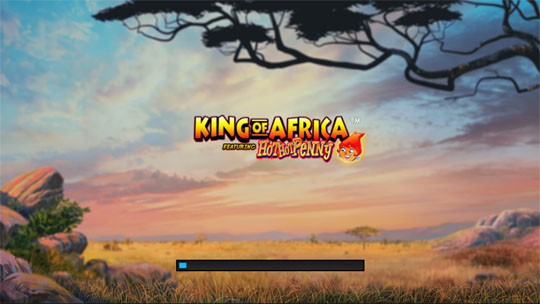 King of Africa doesn’t have a progressive jackpot. However, the game has a decent standard jackpot of 15,000 coins if you get five-of-a-kind wilds.

Besides standard features, King of Africa has some unique bonuses, including:

The King of Africa logo, which happens to be the wild, substitutes for every other symbol on the reels besides the scatter symbol (the African tree). Line up five wilds and get a 100x win. The wild emerges after an animated lion paw tears up the reel.

Get three or more scatters (the African tree) anywhere on the reels and activate the free spins. This feature sets the reels on fire, as if the sun isn’t hot enough in the savannah grasslands. You are entitled to a minimum of eight free spins initially, although you can get more using other special features.

You can select three to five tiles during this bonus event. Your selection is dependent on the number of scatters that triggered the bonus feature. Every tile has a different prize. You can win one to thirty additional free spins if you reveal gold coins.

Once you are in a free spins round, an expanding wild represented by a giraffe icon emerges. The icon appears randomly with every spin.

If you only get two scatters and miss out on the free spins, the game will lock the reels with the scatters in place. The other reels will re-spin two times to try to find the elusive third scatter symbol. This re-spins feature works for regular symbols as well. It is possible to activate free spins to the extent of unlocking the standard jackpot.

If you land the third scatter during this round, you will win eight free spins. You will also get access to the Hot Hot Penny feature, which gives you a chance of winning more. The feature presents you with a five-by-five grid of tiles.

The number of tiles you choose from is determined by the number of scatter symbols accessed (three, four, or five scatters). Each pick will offer you additional free spins. You can also get golden coins, and each awards you five free spins. Two and three coins will give you ten and thirty free spins, respectively. 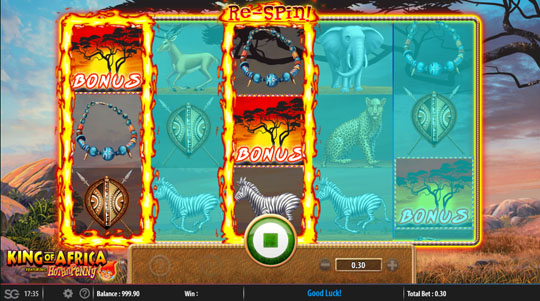 King of Africa is for any slots fan who loves the African jungle and its inhabitants. The reel features ancient gods, roaring lions, towering giraffes, and elephants, among other members of the expansive African savannah.

The game’s features are also bound to excite fans of African-themed entertainment. Fans of the hit movie The Lion King will enjoy playing this game since it features a similar soundtrack and many other features reminiscent of the movie.

Other similar games from WMS

WMS has other similar games, the most notable being Wild Jungle. The game has the same theme, although it isn’t exclusive to African jungles. Nevertheless, it is still a celebration of wildlife, with special inclusions like lost civilizations, treasures, plants, insects, and birds.

If you find Jungle Wild a bit basic, you can try the sequel, Jungle Wild II, which is also by WMS. The sequel has the same wild theme but features major improvements on graphics and gameplay. You will love playing this game if you like slots that are inspired by the wild.

Great design: King of Africa takes you through an African safari adventure. The game features everything you would expect to find in a typical African savannah and more. Besides featuring wildlife staples, the game also has a matching background – thick grasslands where leopards and lions camouflage and wait for prey as the sun sets.

The game also features some impressive animations. For instance, the king of the jungle (the lion) is seen tearing down the reels to reveal the wild symbol. The reels catch fire when you land scatter symbols, and the sound effects match those of a wild savannah. King of Africa isn’t just another wildlife-inspired slot. The overall design work is commendable.

Great bonuses: WMS offers typical bonuses and additional features to help you score some decent wins. The re-spin feature stands out for offering added assistance when you are short of achieving a combination.

Fixed RTP: Variable RTPs tend to favor high-stakes players. A fixed RTP offers you almost the same odds, regardless of stakes. It’s good to know you have a decent chance of winning, even if you are a low-stakes player. 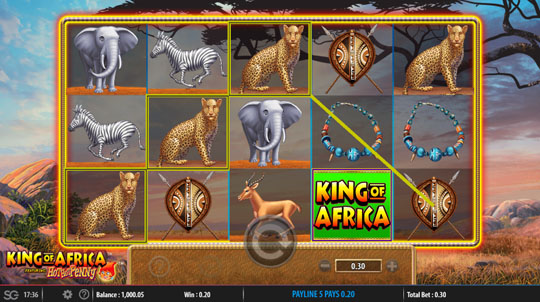 Unimpressive graphics: Although WMS has done a good job with the overall design of the game, the graphics aren’t as impressive as other elements of the game. There are many online casino slots today with the same theme. The niche is extremely competitive. If you play wildlife-inspired slots often, you must have come across slots with better graphics. If the game didn’t have unique features like the Hot Hot Penny bonus, it would be hard to overlook its visual shortfalls.

Symbol variety: African jungles have more to offer than what appears on the reels. Nine reel symbols aren’t enough to represent all the wildlife animals of the savannah.

Small wins: There is a lot of action on the reels after a few spins; however, the wins don’t amount to much. The 15,000-coin jackpot is elusive. This is what you would expect given the slot’s 96% RTP, and the difficulty of landing five-of-a-kind wilds.