Jumpin’ Jalapenos from Konami Games is filled with many of the images that come to mind when you think of Mexico. From raging bulls to tacos, to jalapeño peppers that jump across the screen, it is all there in this slot game originally released in 2009.

This game features all of the denominations and betting line options you’d want. It also has a fun theme that keeps you searching for jalapeños to trigger the free spins. It is during the bonus round that the substitute symbols become nudging symbols, and the wins can truly stack up.

The theme of Jumpin’ Jalapenos captures old Mexico, with symbols that include adobe homes, desert scenery with a cactus, an old acoustic guitar, a taco, and a raging, snorting bull. Additional symbols are a man wearing a sombrero (which serves as a wild) and the jalapeño peppers, which jump when three of them appear and instigate the bonus round.

There is no background music, which is a missed opportunity to help set the scene and bring life to the guitar symbol. The nines and tens are also untouched by any creativity. The jack, queen, king, and ace symbols include faint drawings of things like corn and the fleur-de-lis.

Overall, the game sticks to its theme, and the graphics are bright and detailed. The fonts are an eye-catching red and yellow. You will certainly be enticed by the visuals.

Konami Games offers Jumpin’ Jalapenos as a three-by-five-reel video slot game, complete with an auto-spin option for online players and 30 paylines, all numbered for clarity.

There are five regular symbols– the desert, bull, home, taco, and guitar– as well as nines, tens, jacks, queens, kings, and aces.

The man with the sombrero serves as the wild and pays the most of any symbol (500 credits) when five of them appear at the minimum bet. That man also nudges during free spins, meaning one wild in any column fills the entire column, at which point the man dances while winning credits are tallied.

Additional free games can be won during the bonus round, but there are no extra payouts, as wins pay the same as during regular play. 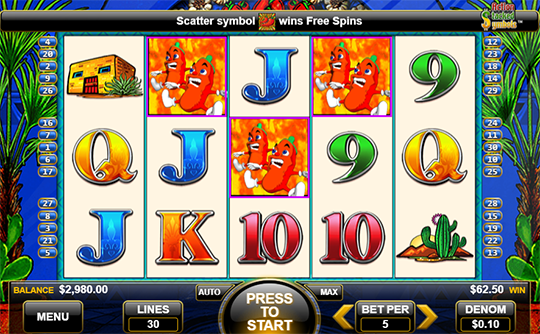 Jumpin’ Jalapenos does not offer a jackpot. However, if you pull the man with the sombrero on all five reels while playing the maximum bet at the highest denomination, you can win $150,000.

Jumpin’ Jalapenos adds a nudging wild symbol to its bonus round, which increases the likelihood of bigger wins and earning the free spins. The game does not have a unique or special feature like some other Konami slot games.

The man with the sombrero performs the job of a wild symbol, able to replace any symbol on any reel during regular play. During free spins, the same man also becomes a nudging symbol, taking over any reel on which he appears to create an entire column that becomes wild. When that pays, he begins to dance and celebrate by shaking maracas.

The jalapeños are the scatters and only appear on the second, third, and fourth reels. Three scatters pay only four credits but do trigger the bonus round, which always consists of 12 free spins. 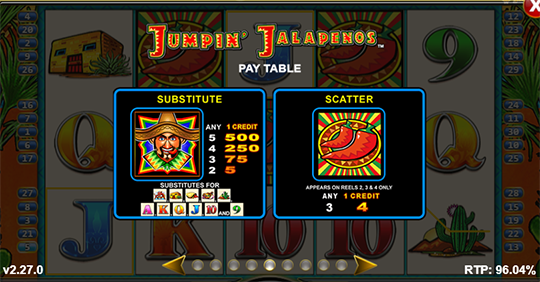 This game will appeal to players with an interest in Mexico as well as anyone interested in a colorful, bright slot. The symbols are vibrant, and when the jalapeños and man with the sombrero come to life, it brings extra excitement to the screen.

Some may steer clear of Jumpin’ Jalapenos because of its stereotypes and antiquated images, but the game has stood the test of many years in the casino market without any substantial complaints.

The wide range of bets available for the game is very enticing. Players who want to spend as little as $0.30 per spin can play for a long while, while high-rollers can max out at $300 with every bet. It gives players of all bankrolls a chance to play.

There is another version of the game called Jumpin’ Jalapenos Jackpots, which offers the jackpot that this regular version does not. Konami Games also offers a Dancin’ Jalapenos game with a similar theme.

As for similar cultural themes, Chili Chili Fire is a popular game in the Konami catalog. Mariachi Riches would also fall into this category.

Min/max betting range: You can play for as little as $0.30 a spin or up to $300, and the game offerings don’t change. This slot welcomes people of all financial means to enjoy the game.

Nudging wilds: The wilds in any game are a plus, but when they transform into nudging wilds, it changes the possibilities. The wilds can take over one or more reels during the bonus round and dramatically increase the payouts.

Visuals: The colors of Jumpin’ Jalapenos are brilliant and engaging, keeping you glued to the screen with yellows, reds, and greens that couldn’t be much more intense. The symbols, like the man with the sombrero and the jalapeños, come to life on the screen and transform the game into more of an experience. 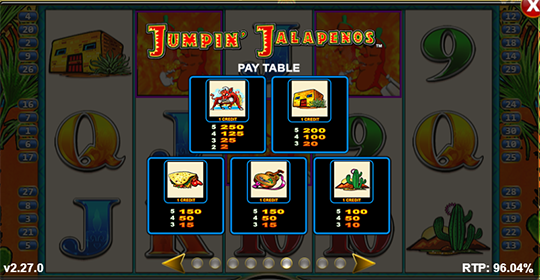 Limited bonus round: Most casino games offer free spins dependent upon the number of specific symbols that hit at a certain time, with more symbols garnering more spins. This game is limited to 12 free spins when the three jalapeños hit.

Stereotypes: The theme of Jumpin’ Jalapenos is meant to pay homage to old Mexican culture, but some of the symbols are stereotype-driven and may be offensive to some players. The snorting bull, the overfilled taco, and especially the dancing man with maracas could be seen as too culturally insensitive.