Jaguar Princess is a jungle-themed slot from High 5 Games. It has been available in online casinos since 2011.

High 5’s Jaguar Princess focuses on both a mystical Amazon princess and jaguars. The former is a dark-haired beauty who shares a mental connection with jungle cats.

This slot relies on its appealing theme, great graphics, and low betting structure to attract players. However, its lack of big payouts prevents it from being a universally loved slot.

Jaguar Princess takes you into the heart of the Amazon jungle, which is home to a dense jaguar population.

The background does a nice job of portraying the setting without being overbearing. It offers faint views of mountains, mossy trees, and a setting sun.

The dim background allows the well-designed symbols to take center stage. Main symbols include the Jaguar Princess logo, the princess, and three types of jaguars (spotted, black, and white).

Other icons include a claw, tribal necklace, gold bracelet, emerald ring, A, K, and Q. Every symbol features excellent detail, except the three letters.

You can also look forward to entertaining animations with most wins. These animations include:

This slot doesn’t offer a traditional soundtrack. Instead, it only features generic music whenever the reels are spinning.

Luckily, you get to hear original sound effects during payouts. These sounds include the jaguars growling, an eerie noise when the princess’ eyes turn green, and tribal music for the necklace and ring. 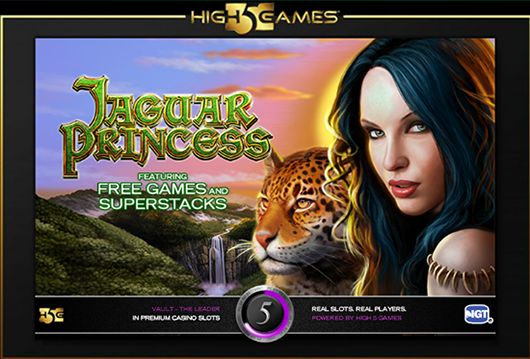 Jaguar Princess includes six reels and 50 lines. The lines can be adjusted from 1-50.

This slot also offers a few gameplay options, including autoplay and replay. Autoplay keeps the reels spinning automatically for 5-25 rounds.

Replay lets you rewatch previous spins, which is great for re-living big payouts and free spins.

The sound can be turned on and off with the speaker button. This choice is standard among most online slots.

Jaguar Princess’ return-to-player (RTP) is 94.9%, which is slightly below average compared to other games. The volatility is low, which means you can collect frequent wins.

Unfortunately, most of these prizes are small. The largest possible payout is $5,000 for six wild symbols.

You must bet $10 per line to earn this prize. Most slots allow you to win much more for such a large line bet.

What jackpots are available in Jaguar Princess?

This slot doesn’t feature a fixed or progressive jackpot. It doesn’t offer any large non-jackpot prizes either.

However, considering the risk, $5k is unimpressive. If you’re a low roller, you must depend on features to boost your wins. 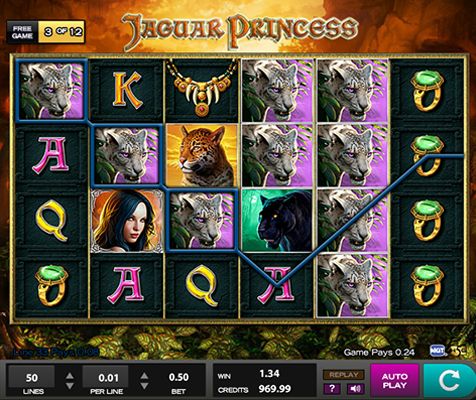 Jaguar Princess partially makes up for the lack of big prizes with adequate features. You have a chance to net large payouts with Super Stacks and free spins.

The Jaguar Princess logo is the wild icon. It substitutes for every other symbol except the claw to form wins.

The claw is the scatter icon and only appears on reels two, three, four, and five. It triggers free spins when appearing at least 12 times anywhere on the reels.

The claw serves no function besides triggering the bonus. Scatter symbols in most other slots offer a payout along with unlocking bonus rounds.

Jaguar Princess offers Super Stacks, which are reels full of the same symbol. The symbol that forms a Super Stack is chosen randomly at the start of each round.

Multiple Super Stacks of the same icon greatly improve your chances of winning big. You have the opportunity to cover the entire 4×6 grid with the same symbol.

The claw scatter symbol delivers anywhere from 12-16 free spins. The number of triggered icons determines how many spins are awarded.

The sky turns to a reddish hue when the bonus round is triggered. You’ll hear a mixture of tropical music, jaguars growling, and tribal chanting, which brings the jungle to life.

Who is Jaguar Princess ideal for? 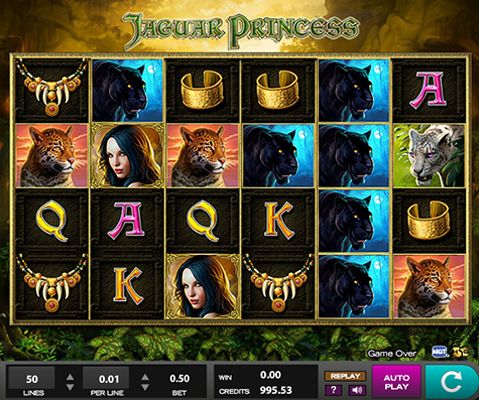 This slot will appeal to low rollers and casual slots fans. Less risk-averse players will appreciate the small potential bets and frequent wins.

Casual players should enjoy the jungle/princess theme. This game feels like an Amazon version of the Tarzan series, which takes place in West Africa.

Jaguar Princess won’t appeal to players who crave big wins. The largest payout is worth 500x the line bet, which is very small for a top prize.

Fans of modern slots may not be thrilled with this game’s features. While the Super Stacks and free spins are nice, Jaguar Princess doesn’t offer scatter payouts or a sophisticated bonus round.

Similar High 5 slots include She-Wolf, Shadow of the Panther, and Jaguar Princess 2.

She-Wolf is a five-reel, 40-line slot based on a woman who can transform into a wolf. This game is visually comparable to Jaguar Princess despite being released three years later in 2014.

Shadow of the Panther is about a man who can connect with panthers. While the theme is very comparable, the graphics are slightly better.

Jaguar Princess 2 is a sequel that launched in 2017. It offers upgraded graphics and a “Second Chance Super Stack” feature. 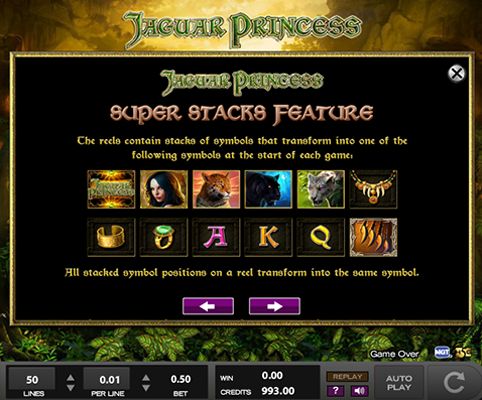 Low volatility: This slot delivers frequent payouts, especially when 50 lines are in play. The Super Stacks help form many of these wins.

Entertaining theme: This game revolves around a mysterious woman who roams the Amazon rainforest with jaguars. Detailed animations and jungle sound effects do an excellent job of supporting the theme.

Low bets: You can play this game for as little as $0.01 per spin. However, you may want to use all 50 lines at $0.01 per spin. You’ll still win frequently enough to sustain your bankroll at this rate.

Poor music: The sound effects may be good, but the music that plays during spins is generic. The bonus round is the only part that features a decent soundtrack.

Below-average RTP: The RTP is 94.9%, which is slightly lower than the industry average. This mediocre payout percentage dampens the low-volatility benefit.