Island Eyes is a five-reel, 40-line slot from High 5 Games. It has been available in online casinos since 2012.

This game revolves around a tropical island and its inhabitants. It also features a mysterious element that’s highlighted by a treasure-filled temple.

Island Eyes doesn’t offer the greatest atmosphere or biggest payouts. However, this slot does have a few redeemable qualities that make it worth considering.

Island mysteries are a popular subject in TV shows and movies. High 5 channels this concept with Island Eyes, which is based on a remote island and its secret temple.

The reels consist of purple brick, which creates an eyesore when contrasted against the background. High 5 would’ve been better off choosing a more neutral color for the reels.

The symbols look much better than the background-reels combination. They include an Island Eyes logo, female islander, male islander, eagle, leopard, temple door, A, K, Q, J, and 10.

Several of the symbols offer detailed animations during wins. These animations include:

This game doesn’t feature a regular soundtrack. However, a generic slots tune plays while the reels are spinning.

Luckily, the sound effects that occur during wins are original, such as tribal drums, a roaring leopard, a screaming eagle, and a mysterious jingle. 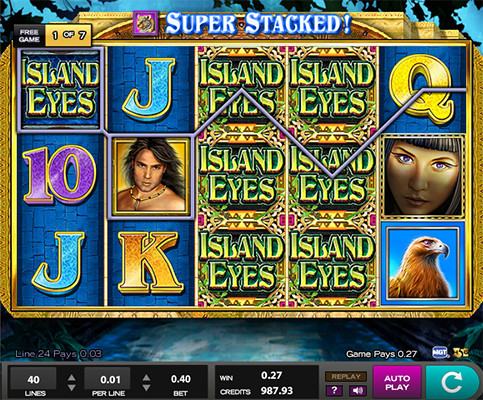 Island Eyes includes five reels and 40 lines. The lines can be adjusted from 1-40.

If you’re a low roller, then you’ll like the small potential bets. You can play all 40 lines for $0.40 or use fewer lines and wager a smaller amount.

Island Eyes features other options, including autoplay and replay. Autoplay makes the reels spin automatically for anywhere between 5-25 turns.

Replay lets you re-watch the last spin. This option is handy when you want to film a big win and show it off on YouTube or elsewhere.

The return-to-player (RTP) on Island Eyes is 94.9%, which is slightly worse than the industry average. The volatility is fairly low, though, with Super Stacks producing plenty of wins.

None of these prizes are impressive in the grand scheme of things. Most players won’t want to risk $10 per line just to have a chance at the $10k and $2.5k wins.

What jackpots are available in Island Eyes?

Island Eyes doesn’t offer a jackpot, which is unfortunate given that the non-jackpot wins aren’t anything special.

The female and male islanders offer 50x and 40x, respectively, for five symbols. The discrepancy between these payouts and those involving the wild symbol is noticeable. 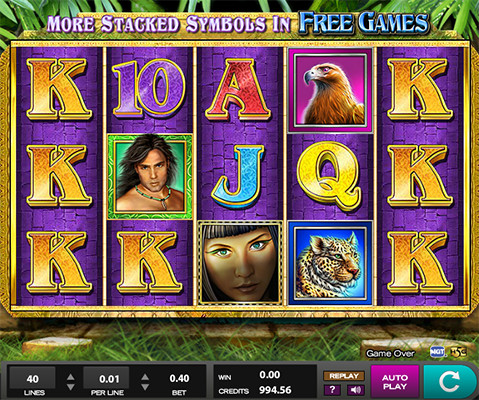 This game does not offer life-changing money. However, it does include a few features that can lead to big wins.

The Island Eyes logo is the wild symbol. It substitutes for everything except the temple door to form winning combinations.

A Super Stack is a reel full of the same symbol. Any symbol can serve as a Super Stack, including the wild and scatter icons.

Super Stacks improve your chances of getting big wins, especially when multiple stacks of the same symbol appear beside each other.

A Super Symbol consists of three or more Super Stacks appearing in a row, beginning with the first reel. It’s possible to form a Super Symbol that covers all five reels.

The temple door is the scatter icon. It only appears on reels two, three, and four.

The scatter symbol’s lone function is to trigger free spins. It doesn’t offer prizes on its own, which is disappointing given that scatters in most other slots typically pay. 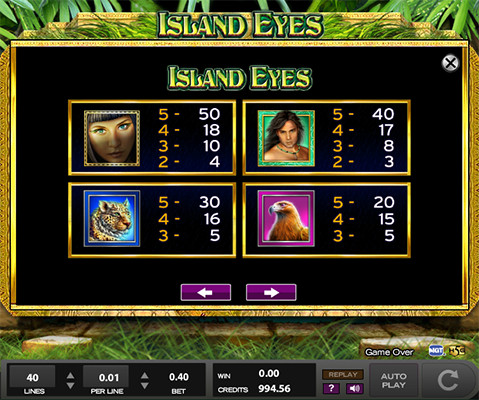 The temple triggers seven free spins when it appears as a Super Stack in reels two, three, and four.

All triggering doors remain on the reels. You must select one of these doors to reveal which symbol will serve as the bonus’ Super Stack.

The only possibilities include the male islander, female islander, eagle, and leopard. All Super Stacks are transformed into the chosen symbol during free spins.

If you reveal the eagle, for example, then every Super Stack will consist of eagles during the bonus round.

In contrast to the main game, free spins feature music. The tune sounds like something out of a 1960s James Bond flick.

A temple appears onscreen at the conclusion of the seven free spins. This temple is presumably what holds the island’s mysteries.

Who is Island Eyes ideal for?

This slot will appeal to low-budget players and casual slots fans. Bet sizes go as low as a penny per spin, which means any player can afford this game.

While the theme isn’t as polished as it could be, those who enjoy an island adventure should still appreciate this game.

Serious players who want the most advanced features probably won’t fall in love with this game either. While the features are adequate, they don’t include a detailed second-screen bonus round.

Islands of Galapagos and Princess of Paradise are two other island-themed slots from High 5.

Princess of Paradise transports players to a fantasy land filled with lovely jungle women and exotic wildlife. This game lacks notable features, but its graphics are slightly better than those in Island Eyes.

Islands of Galapagos is a five-reel, 50-line slot based on the famed Galapagos island chain. This game offers similar features to Island Eyes, but it’s far superior from a visual standpoint. 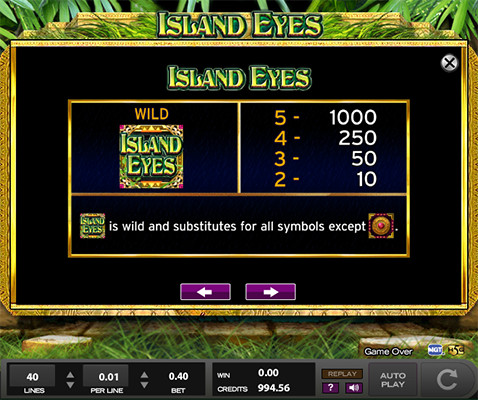 Interesting theme: The theme isn’t blatantly obvious at first. However, most players will eventually figure out and enjoy the mysterious island angle.

Low bets: Anybody can enjoy this game thanks to the low-bet threshold. One can play for just a penny per round or employ all 40 lines for $0.40.

Solid features: Island Eyes isn’t going to wow experienced players with its features. However, it offers enough to keep the average player entertained. Free spins, Super Stacks, and Super Symbols are all available.

Poorly designed atmosphere: The background is too realistic for the animated symbols. The purple-brick reels further add to the visual disaster.

Low top payout: The top prizes are low compared to most other slots – 1,000x, 250x, and 50x are the three largest payouts. One must bet $10 per line or get lucky with features to experience notable wins.

Below average RTP: The 94.9% payback isn’t terrible. However, Island Eyes could benefit from offering higher RTP to make up for the absence of big prizes.