Founded in Tokyo in 1969, Konami has developed some of the world’s most popular games. This includes the horror franchise Silent Hill, arcade game Dance Dance Revolution, and competitive trading card game Yu-Gi-Oh.

In the past two decades, Konami has also been a force in the online slot market.

Gypsy Fire is in many ways typical of a Konami slot. This 30-payline, five-reel game uses stacked Wilds and other extra features along with a coin-based betting system.

Gypsy Fire looks simple enough, but there is some charm to that.

Based around the mystical fortune teller trope, this game includes all the accouterments you would expect from a gypsy seer. The symbols include:

There aren’t many fancy animations or extras on Gypsy Fire, although it looks decent in general.

The paylines are all clearly displayed on Gypsy Fire, which is a nice visual feature that adds some clarity and transparency to proceedings.

There’s barely any music – as with most Konami slots, the jingles are only played at the beginning of the bonus round or during big wins.

Most of the time, the only sound accompanying your spins are the standard slot game beeps and bloops and the click sound when each reel stops. 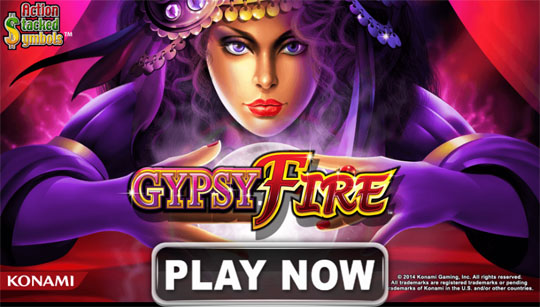 This is a decent bet range for lower-budget players. However, it comes nowhere near the $400 a spin limits of some of Konami’s other slots titles.

Gypsy Fire provides an auto spin feature, which lets players roll 10, 25, 50, 100 or 200 spins. Quick players can adjust their coin bet in between auto spins with canceling the feature.

However, there is no option to stop the auto spins at a certain win or loss point, which is a shame.

Lastly, Gypsy Fire’s Return-to-Player (or RTP) is 96%. This is almost identical to at least a few other slots from Konami. It puts Gypsy Fire in the higher-mid-tier of online slot games and is a reasonable RTP.

Sadly, there are no jackpot.

Konami has not hopped on the big-money signposted-prizes train with most of their slots.

This is a bit of a miss as not having a jackpot can seriously detract from any slots appeal in the modern market. 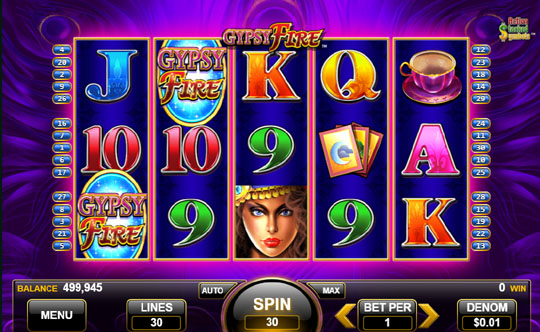 Gypsy Fire includes one Wild symbol, one scatter symbol, and one bonus round. There are a few extra features too, such as Stacked symbols and bonus multipliers.

There’s only one Wild symbol here – a Crystal Ball. It acts as a usual Wild symbol, substituting for any other symbol when required for a winning payline.

Other than that, Wilds can appear as a stacked symbol as well as any of the other symbols. This means they cover the entirety of one reel after a spin.

Pulling all Wilds on one or more reels can result in big wins.

During the bonus free spins round, all Wilds are replaced by a 2x, 3x, 4x, or 5x symbol, which also counts as a Wild. These multiply any line wins they are part of by the designated amount.

There’s one scatter symbol on Gypsy Fire, and that’s the Gypsy Fire logo. Pull three or more of these to gain entry to the bonus round as well as a cash prize. The prizes are:

This means a total prize of $3000 is possible at maximum bet. 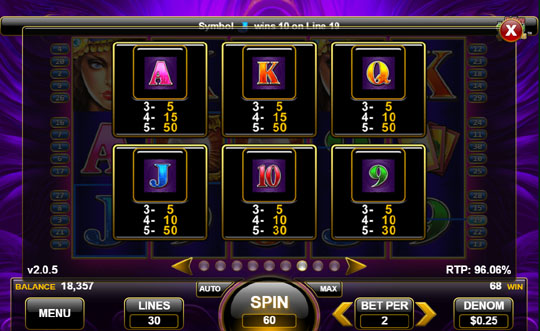 Pull three or more scatters as described above to unlock Gypsy Fire’s solitary bonus round. This a Free Spin round played on a modified version of the main reels.

The Wild symbols become more frequent during the bonus round and are replaced by 2x green, 3x yellow, 4x purple and 5x red versions of the Crystal Balls.

These act as standard Wilds and also multiply any line wins by the shown amount.

You can also win more free spins during the bonus round. You can earn them by pulling more Gypsy Fire scatter symbols at the rates detailed above.

Who is Gypsy Fire ideal for?

This game should suit players who prefer simpler slot titles without a huge number of extra features and complicated additions.

It should also be good for penny slots players as the minimum bet is quite low.

Destiny of Athena and Astronomical Magic are two similarly-themed slots from this Japanese developer.

Most Konami slots follow a similar style, with 30 paylines and Stacked reels. If you enjoyed this title, you should find a lot to like in many other Konami games, too. 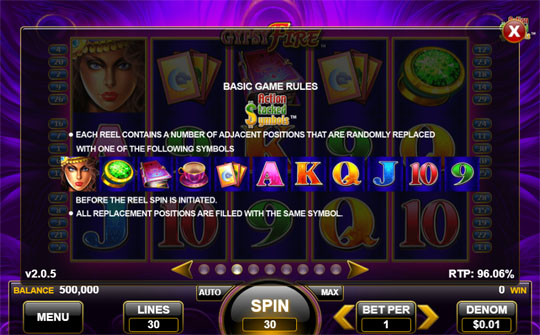 Fairly Simple Game: With only one bonus round and a couple of extra symbols, Gypsy Fire is a nice and simple slot game that almost any player will be able to pick up quickly.

Low Minimum Bet & Clear Paylines: Penny slots players should be reasonably happy here, as the structure of Gypsy Fire is transparent and clear with a lowest bet of $0.30.

No Jackpots: The prizes on the main reels here feel quite low, and the lack of a designated big-money prize does little to help this.

Low Max Bet: $37.50 is both an odd and relatively low maximum bet for an online slot.

It definitely isn’t the lowest on the market. However, considering some Konami slots go up to $400 a spin, high-rollers might be disappointed with Gypsy Fire.