Based out of Tokyo since the 1970s, Konami has produced many hit videogames, trading card games, and now also slots.

Great Moai uses 30 paylines and five reels as well a novel theme that you might not have seen before.

Although it nicely incorporates elements of the Easter Island and other Pacific nations’ cultures, the general slot experience here is quite similar to most Konami slots titles.

The Easter Island heads are an iconic symbol of Polynesian and Pacific Ocean-island culture. Carved sometime over 1500 years ago on this tiny and remote island, they have become a hugely popular piece of art and history.

It’s no wonder that eventually, someone would turn them into a slot game.

Konami’s Great Moai slot is aesthetically appealing, with some decent animations. It follows the same general layout as most Konami slots but definitely does enough to differentiate itself with the visuals.

That’s more symbols than some Konami slots, and many of them are nicely animated.

As with most Konami slots though, there’s no real music here. Only a few standard slots style jingles play during big wins or at the start of the bonus round.

There are a few short segments of Polynesian-style chanting that play during the bonus reels, but they quickly get replaced by the slot’s standard winning jingle as paying lines come in.

That was a big missed trick by the developers as Great Moai’s theme gives extensive scope for some unique slot game music.

Other than a couple of short sound clips, players will mostly just be listening to the clicks and beeps of the reels during gameplay. 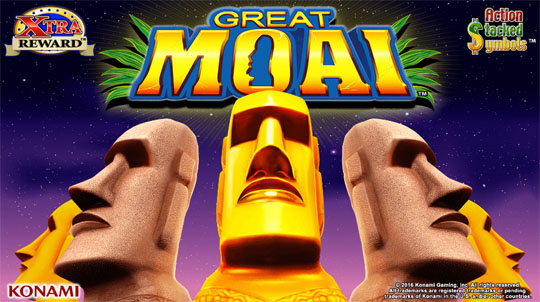 Players choose a bet per line of one to five and then a denomination between $0.01 and $0.50. These two are multiplied, then that total is multiplied by the 30 lines to get the final overall bet.

However, Konami adds an extra 50% onto the bets after that.

This kind of added cost in a slot game is acceptable when there is a huge range of features. However, that’s not the case with Grand Moai.

There’s a decent range of extras, but not enough to warrant a 50% charge on all bets in our opinion.

However, that bet structure does mean that the range of bets in Grand Moai is quite broad.

On the other hand, both penny slots fans and the most high-rolling players may be a bit disappointed here, especially considering some Konami slots have maximum bets as high as $400 a spin.

Lastly, the Return-to-Player of Grand Moai is 96.10%. That puts it in line with almost every other Konami slot game and in the upper-middle tier of online slot RTPs. 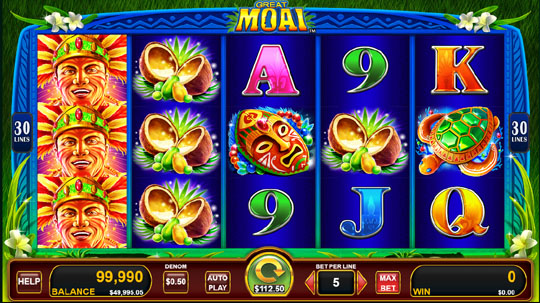 The stacked Wilds feature that occurs fairly often can give some decent wins. However, this doesn’t make up for the lack of a dedicated jackpot prize.

To be competitive for player’s attention in the modern marketplace, a slot needs a signposted jackpot prize. Grand Moai is sadly lacking here.

There are two kinds of Wild symbol, a bonus scatter, and a solitary bonus round in Great Moai. There are also a few extra features including stacked Wilds and additional Wilds during the free spins bonus game.

The Wild Symbols here are the Giant Easter Island Stone Heads and they only appear as a Stacked reel.

They count as standard slot game Wilds – they replace any symbol to make a winning payline.

Because they only appear covering entire reels at a time, this can lead to some big wins. This is also the most unique feature of Great Moai and one we enjoyed seeing in action.

Every so often, two or more Easter Island heads bounce across the reels one at a time before coming to a stop. Some pass right over all five reels and disappear off the other side of the screen before the animation stops.

Some of these heads can be red versions, which offer a 2x multiplier on any winning paylines made from them. 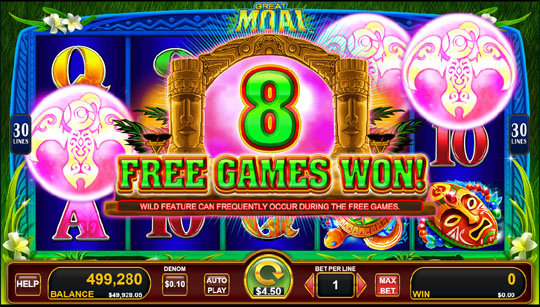 This stacked bonus Wild feature occurs more often during the bonus round. It happened at least twice both times we pulled the bonus round during our playtest.

There’s only one scatter on this title, and this is the Bonus Mythical Bird icon.

Pull three or more of these, no matter what position on the reels, and you’ll unlock a free spins bonus round. You get the following number of spins and a prize, depending on how many Bonus icons were pulled:

This means there is a maximum prize of $3750 for any one line on one spin of Great Moai’s reels.

The only Bonus Round on Great Moai is a free spins game, which is unlocked as described above.

The free spins are played at the same overall bet size as the spin which triggered the feature.

More free spins can be won at the same rate as detailed previously – but without the extra prize.

During the free spins round, the stacked Easter Island Head Wilds are much more common. That includes their 2x variants.

This means some big wins are definitely possible if you pull a whole screen of 2x stacked Wilds.

This bonus was fun to play, but a more original bonus round than some free spins with added Wilds would have been nice. 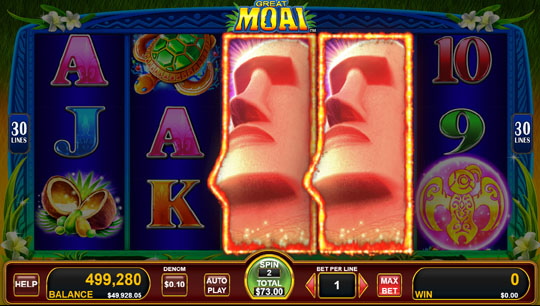 This game should appeal to people looking for a unique theme. There aren’t many slot games out there with Polynesian-culture stylings.

Grand Moai also has a very reasonable range of bets that should appeal to the majority of players.

Anyone who is partial to the stacked Wild feature in their slots should also enjoy this Konami title as that particular mechanic is seen a lot in this game.

If you’re looking for a game with a similar theme from them though, you may be out of luck.

There are only a few examples of this style out there, but one example is Tiki Tumble by Push Gaming.

Fresh Theme: You won’t find too many slots with this theme on the market. It makes for a nice change from the many Far-Eastern or classic American-style slot games on the market.

The visuals are quite appealing too, and the core stacked Wild icons are aesthetically pleasing to watch bump across the reels. 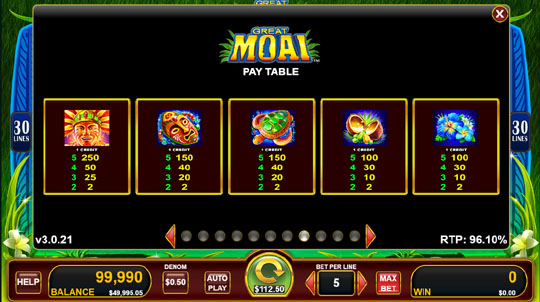 Decent Bet Range: $0.45 to $112.50 is a good range that should satisfy most players, except those with budgets on the extremes of either end.

No Jackpots: We’ll always mark a slot down for missing out on jackpots, and Grand Moai is no exception.

50% Extra on Bets: This system is commonly found in big-budget licensed titles that have a bucketload of extra features. Although the stacked Wilds are fun, there’s just not enough content here to justify that extra money.