Something about watching fish swim in an aquarium can be very tranquil. Maybe it is the beauty of the fish themselves, the purity and cooling nature of the water – or maybe it’s both. Being transported to a mindful bliss of relaxation is something we all look for from time to time.

The Goldfish machine from WMS packs that same feeling into a slot machine. With five different fish to gaze upon and music to take us away from what troubles us, that tranquil feeling we search for is right at our fingertips to enjoy while possibly also winning money along the way.

The Goldfish slot takes us inside the aquarium where many inhabitants and objects can be found. All the different types of fish swimming by in the background are represented on the reels along with other things that might be found in an aquarium, including seaweed, turtles, fish food, coral, nets, and crabs.

Although the fishbowl aquarium doesn’t show up until the bonus rounds, it still feels and looks like a regular, square aquarium on its own.

The sound effects in Goldfish are retro – when the reels stop, a clicking sound plays. There is also a ding when fish food hits when you are close to hitting a bonus round. Besides that, none of the other animations come with any sounds, including the Goldfish, which represents the wild symbol.

The music that plays when spinning the reels reminded us of a cruise ship, and when we hit something that paid, island drums played as the money counted up. The bonus round music was basic and didn’t leave much of an impression.

Goldfish includes five reels with 25 paylines. You can spin the reels yourself or set it up to auto spin either ten, 50, 100, or 200 times. The Goldfish is the wild symbol and substitutes for any other fish or symbol on the reels, giving you the same payout as if the regular symbol had hit.

All fish and symbols pay by matching three to five of the same icon – except for the goldfish, which pays for two.

Top paytable values (for 5-of-a-kind combinations on a 1-credit bet): 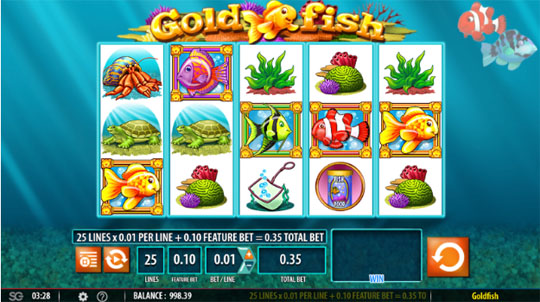 The best thing about the Goldfish slot machine is its six different bonus games. Many slots do not have this many, and this variety breaks up the monotony and makes things more exciting.

If three cans of fish food land anywhere on the reels, you trigger the Fish Food Bonus. The point of this bonus game is to match different fish food before you reveal three turtles shells. If you match three of the same fish food symbol, you win the cash for that type of food, and if you match four, you win double that amount.

If you reveal three turtle shells, you get to select one of those three turtles and reveal an award of 2x, 3x, or 10x. If you are lucky enough to match all of the different fish food, you can choose one of three golden turtles that hold awards of 20x, 30x, and 50x.

Out of all of the bonus features, we had the best luck and winning streaks during the Fish Food Bonus, and we thought it was the most fun one.

The other five bonus features are triggered randomly by fish jumping into the fishbowl that appears on the screen from time to time. Each fish represents a different game:

When a goldfish jumps in the bowl, you select a bubble that will grant you five, eight, ten, 15, or 20 free spins. After that, you choose from another set of bubbles for a multiplier that can award you 2x, 3x, 5x, 7x, or 10x. This pays according to your original line bet. 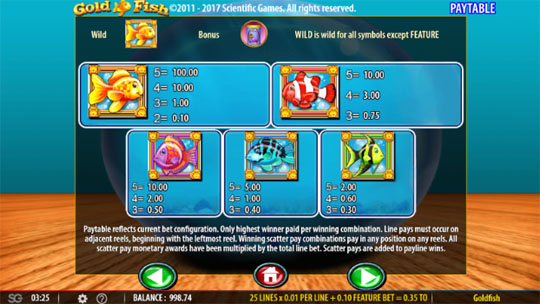 When a red fish hops in the bowl, you choose between a castle, clam, and chest to reveal a prize.

But that’s not all – each of the other four fish can kiss your amount 2-10 times and raise what you have won. The purple fish kiss multiplies it by 25x to 200x, the blue fish by 20x to 100x, the green fish 5x to 50x, and finally, if the Goldfish happens to kiss your prize, it automatically doubles.

This was probably our second favorite bonus game behind the fish food, and it’s certainly one of the most lucrative.

The purple fish hops in the bowl, then proceeds to blow three bubbles, each with a number between 1-9. These numbers then arrange themselves into a three-digit number, which is your reward. In our experience, this was the most boring bonus round in the game and did not pay much. We were always disappointed when the purple fish hopped into our bowl.

The blue fish feature is a scatter bonus that awards 1-3 free spins. The scatter feature makes all matching symbols on the reels pay no matter where they land. Free spins are great, and so is a scatter bonus, but a cap of three free spins kind of made this bonus just so-so for us.

If you get the green fish bonus, a bunch of bubbles appear, and you choose one. Your prize is then revealed. However, if you are lucky enough to choose the bubble that says “Award All,” you win all the money under each bubble.

We chose “Award All” a couple of times, and it was worth it. It might have been luck, but it made this bonus game more exciting than just choosing a bubble and claiming whatever award was underneath.

There are not jackpots available for this slot.

The RTP (Return-To-Player) percentage for this game is 96%.

With a minimum pet per line of $0.01 and a maximum of $3, this game is ideal for both small stakes grinders and high rollers.

Other similar games by WMS 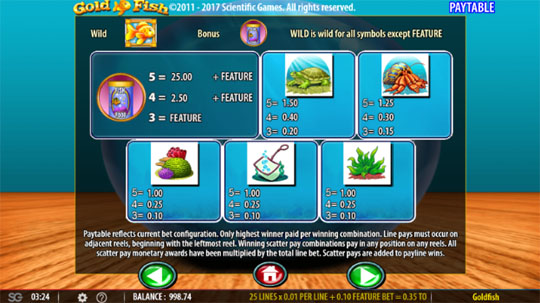 If the aquatic theme is your thing and you want to take it even deeper into the sea, look no further than Nemo’s Voyage.

With creatures like sharks and a giant octopus, you might be back in the water, but this voyage could be a little less tranquil than watching and playing Goldfish – although just as fun.

Music: The music made us feel laid back and eager to continue to spin the reels.

No Jackpots: There are no jackpots available, which is sure to discourage many players.

Bonus Features: We put this in the hot AND not section because a couple of the bonus features are short and boring. Luckily, the game includes four excellent bonus rounds, which makes up for the two that are lacking.