“Who you gonna call?”

If you grew up in the late 80s or early 90s, then the answer to that should be familiar to you.

If not – the correct response is “Ghostbusters!”

This slot game from London-based developers International Gaming Technology, or IGT, aims to capture the visuals and spirit of that classic 1984 film.

A five-reel, 30-payline title, the Ghostbusters game has a bucketload of extra features and includes all your favorite characters from the movie.

Let’s just all agree to forget about the disastrous 2016 remake, OK?

If you have fond memories of the movie, this slot’s theme will be right up your street.

From the iconic Ghostbuster’s theme to the appearance of fan-favorite ghost Slimer dropping extra Wilds onto the reels, all the content here is nicely themed around this hugely popular 80s movie.

The symbols you might find on the reels cover all the main Ghostbusters, plus their equipment and a few side characters. They include:

During many of the spins, Slimer himself will sit at the top of the reels and make appreciative (or consoling) noises depending on how lucky you are with your spins.

The music here is, of course, nothing but the official film theme tune by Ray Parker Jr. This song was not only iconic for its use in the move, but it became a hit in its own right and spent a few weeks at the top of the Billboard 100 in the late 80s.

Not many non-music slots can claim to have an official Number One song as their backing track.

However, that’s not the only impressive sound on offer. Several of the actors re-recorded some of their most famous movie lines for this slot, including Bill Murray himself. There are even clips from the movie that play during the bonus rounds.

Overall, there are loads of nice visual and audio details and flourishes on the Ghostbusters slot that help create a truly exciting experience worthy of the big-name movie license. 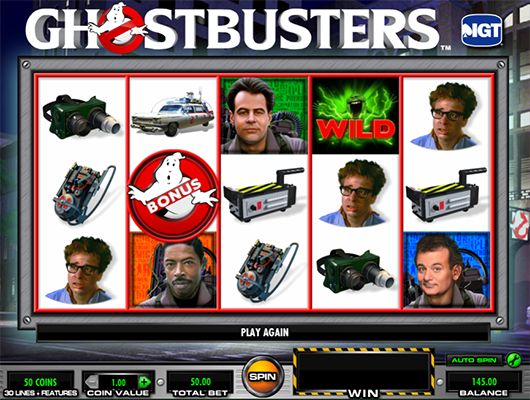 Bets start at $0.01 per line, with a fixed number of 30 lines. However, due to all the extra features, IGT added a mandatory extra 20 lines worth of bet per spin.

That is not a great bet range by anyone’s standards, especially for mid- or high-budget players.

Those who are comfortable adjusting lines for penny bets or usually play games with $200 or more maximum bets will almost certainly be disappointed with the wagering range on offer here.

There’s no auto spin functionality on the Ghostbusters slot, nor can you adjust the number of paylines.

Lastly, we come to the RTP, or Return-to-Player. Ghostbuster’s RTP is 92.5 – 94.2%. This is not only a fairly low variance but also quite low in general.

This game does not feature a designated big-money jackpot prize.

For a licensed title and such a popular piece of culture, this is a big omission.

There are two bonus rounds, two types of Wild, three scatters and various extra features in this game.

This is more depth than your average slot and about what you’d expect from a big license tie-in.

There are technically four different Wild symbols in the Ghostbusters slot. They are:

All four reference the major villains in the movie. The first two appear on the main reels, and the second two only appear in the Stay Puft Free Spins bonus round.

All of them act in the standard Wild symbol manner. That is, they substitute for any other symbol when required for a winning line.

On top of that, this slot offers four Mystery Features – two of which involve Wilds. These can occur on any non-bonus spin.

The first sees Slimer appear in the top corner of the reels. He then vomits ectoplasm which turns the entirety of one to three of the reels into stacked Wilds. With 30 paylines, this can result in big wins.

The second involves Gozer, who summons an extra one to four Wild icons onto the reels. Then, any slots adjacent to the initial Wilds get a chance to also turn into Wilds. 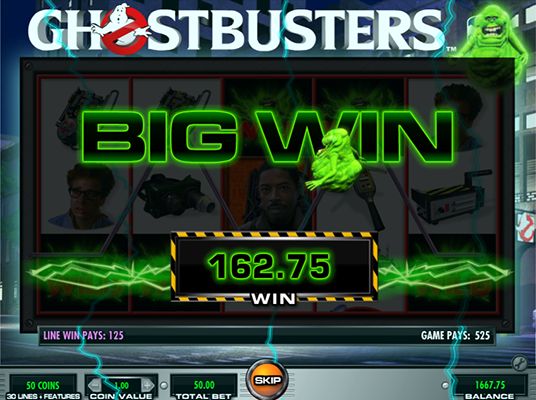 The bonus round symbols, of which there are three, are the scatters on this game.

One is the spirit from the Ghostbusters’ logo. He appears only on reels one to four.

The other two are Marshmallow Man and Slimer in similar poses. They appear on reel five only.

Pull two of the Ghostbusters’ logo and one of either Slimer or Marshmallow Man to unlock the bonus.

Whichever of the two variants is pulled for the third determines the bonus game.

There are two bonus rounds in the Ghostbuster slot game:

Ballroom Busters is a Pick ‘Em style bonus. Players must pick the haunted objects in the room, to reveal a ghost beneath (or not). Click the ghost again to zap it into the trap and reveal a prize – and possibly a multiplier too.

Prizes are based on the players’ bet per line when the bonus was triggered and range from 0.8x all the way up to 20x the original line bet. Multipliers start at x2 and go to up x10.

Bettors get five Proton shots, and there are six haunted objects to choose from.

Stay Puft Free Spins is, as the name suggests, a free spins round. These are played on an entirely different set of reels, with their own symbols and an extra ten paylines.

Players get eight free spins without the possibility of extending the run. However, during the spins, one or more Marshmallow Wilds may land on the reels. They then become locked in as Wilds until the rest of the round finishes.

There’s also the potential for a Ghost trap to open up at the end of any round and pull in one of the locked Wilds. This gets rid of the Wild for the rest of the round but gives a cash prize to replace it.

That can be anywhere between 50 – 1000 times the bet in place when the bonus was triggered.

As far as we could tell, the $25,000 prize on offer here at a maximum bet is the joint-highest potential prize for one spin this game offers. 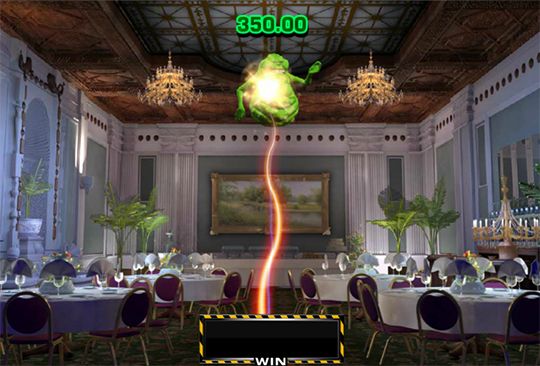 The last two features we should point out occur only on the main reels, on any spin that doesn’t trigger a bonus. That means wins can quickly stack up if you pull one of these.

They are either a random multiplier or a cash award.

The random multiplier multiplies your win by anywhere between 2x and 5x on the current outcome of the spin.

You can also pull these on a non-winning spin, which we found out to our disappointment.

The cash award has a ghost trap shoot up from the bottom of the screen, awarding a prize of 50 to 1000 times your coin value.

On top of any other wins, this can lead to some more-than-decent prizes on a single spin.

Fans of the movie will absolutely love this slot.

Parents who had to sit through it, or even people who just fondly remember the 80s, should also find some nostalgia value in the Ghostbusters game.

In terms of particular slots fans, this game should suit people who like big-budget feature-packed experiences with loads of extras and bonus rounds.

This selection should keep any slots fans who also enjoyed this classic movie happy for a long while. 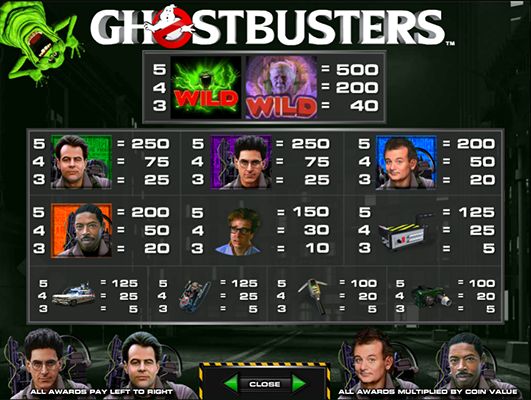 Massive License: One of the highest-grossing and most iconic movies of the 80s, you don’t get much of a bigger license than Ghostbusters.

Brilliant Visuals & Score: With loads of official sound effects, voice lines, video clips and even more from the movie, this one stays very true to the license.

But it’s the little touches, such as Slimer dropping ectoplasm to scatter Wilds on the reels or Bill Murray’s voice saying “this is some serious top-secret stuff” when you open the paytable, that are memorable.

Loads of Bonus Features: We could list them all again, but there are so many we won’t bother. Suffice to say, there is a lot of content in IGT’s Ghostbusters slot.

Low Maximum Bet: We know this game packs a lot of ways to win, but $25 is a rather low max bet for any slot game.

No Jackpot: No excuses on this one. A top-tier license like Ghostbusters deserves a big-money prize worthy of the name.

No Custom Lines or Auto Spin: We’ll always point out when these features are missing as they are very useful tools to a range of players.