Family Guy is a five-by-three-reel slot game based on an animated hit sitcom bearing the same name. The game’s characters and sound effects match those of the Family Guy television show in every aspect, including the soundtrack.

Besides being a perfect replica, IGT’s recreation delivers on the gaming front. The 30-payline game has several bonuses and a $100,000 jackpot. You’ll also find the regular winnings attractive, given they average three figures.

If you have watched one or more episodes of Family Guy on TV or played the land-based slot game bearing the same name, you already know what to expect in terms of themes and visuals. The Family Guy slot features the same wacky Griffin family characters.

The game has well-known protagonists Peter, Lois, Meg, Chris, Stewie, and Brian on the reels, who make up the high-value symbols. Additional reel symbols include Stewie’s teddy bear and ray gun, a TV set, and a bottle of beer.

The game’s wild (the Family Guy logo) substitutes all other symbols apart from the scatter (the World Bonus symbol) that is crucial to triggering bonus features. IGT did a great job replicating important theme and visual aspects of Family Guy, given the reels are set in the same living room as the show, and the comedy is prevalent.

The winning spin can be triggered when you are playing the World Bonus feature as the game has multipliers and stacked wilds.

Besides being inspired by a popular TV show, the Family Guy slot also stands out for offering multiple bonuses, like the Chicken Fight, Lois’ Hot Free Spins, the Drunken Clam, and the Family Guy World Bonus. 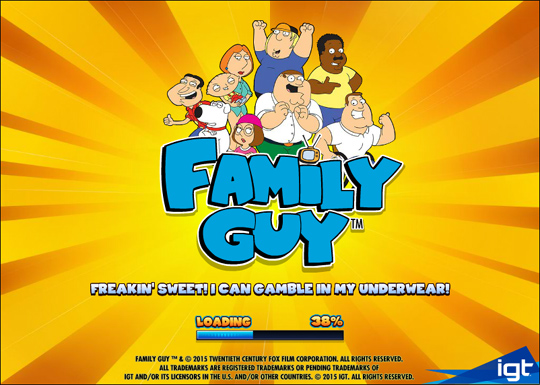 Family Guy has several different jackpots, each of which is represented by a different character. You can win many random bonuses in the game, amounting to a few hundred dollars up to the $100,000 jackpot.

After several spins, you’ll realize the game offers payouts that are more frequent than those in regular slots. IGT has packed this game with bonus features, including:

You need three scatter symbols anywhere on the second, third, or fourth reels to activate the World Bonus, which allows you to spin the globe and enjoy any of the three bonuses discussed below.

To earn this bonus, you must select Peter, Cleveland, Joe, or Quagmire, then choose between cash prizes and beers repeatedly (round after round) until the character you selected passes out.

If another character gets drunk and passes out before your character, you get a multiplier. You can earn 25 to 1000 times your bet with this bonus.

In this bonus, you must select a character and watch them fight a giant chicken. If your fighter is declared the winner after three rounds of action, you get cash and other rewards.

If they lose, you receive fewer picks and cash rewards. This bonus rewards five to 1000 times your bet. 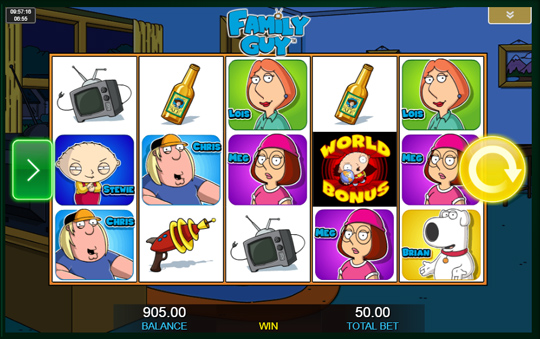 This free spins bonus offers you ten free spins initially. The bonus is triggered when you get four high-paying symbols (Lois symbols) on the reels. The bonus can offer you up to 30 spins.

If you get additional free spins and manage to send Lois “completely wild,” you can land a payout you won’t forget.

You can trigger Peter’s, Stewie’s, Lois’, and Brian’s features to earn some great rewards. Peter’s feature offers a 200x to 500x value on the triggering coin value. Stewie’s feature provides up to three wilds when triggered, while Lois’ feature offers an award ranging from 30 to 1000 credits depending on the symbols indicated.

Brian’s feature causes one or two World Bonus symbols to appear on reel three or four to help trigger the World Bonus.

Fans of the hit TV show will enjoy playing this game. If you love cartoon-themed slots with a unique array of bonus features and decent-sized jackpots, you are bound to find this game entertaining.

You’ll notice the frequent wins immediately when you start playing, so this game is ideal for slots players who love constant payouts. If you like adult humor, you’ll also be in for a treat. In regards to wagering, the slot is perfect for medium-stakes players, given the minimum and maximum wager of $0.50 and $2.00, respectively. 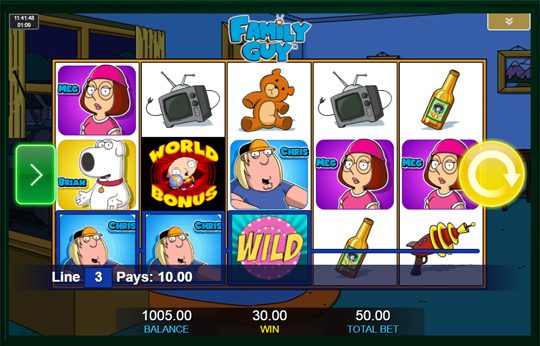 Great replica: This game is a perfect replica of the hit TV show. IGT has incorporated the same characters and soundtrack and even used the family’s living room as the reel backdrop. If you love Family Guy, you’ll like what IGT did with the game.

Great bonuses: Family Guy has a vast assortment of bonuses that make the game rewarding. The character-based rewards, coupled with many random bonuses and jackpot prizes, make this game stand out from other slots inspired by TV shows.

The game has an impressive winning range, from three figures up to a six-figure jackpot. What’s more, these bonuses are available to you whether you are playing for money or for free.

Engaging slot: IGT has added many exciting discoveries. You are bound to uncover something new every time you play this game. The iconic characters, funny theme, regular payouts, and user-friendly features will give you a reason to keep playing.

Impressive graphics: IGT developers are renowned in the industry for delivering superior graphics. They did a great job when creating the characters in this game.

Small base game wins: The game is designed to avoid long losing streaks. However, the frequent rewards don’t translate into huge wins. Frequent payouts (ranging from $0.05 to $0.45) might not add up to much when the minimum bet is $0.50.

Low variable RTP: The game has an RTP of 92.50% to 96.05%, which is low, especially for low-stakes players. Even if you get many wins, the low RTP translates to lower average gains. Unless you place sizable bets and play for a while, don’t be fooled by the frequent wins.

Regional restrictions: Although anyone with a computing device can play the Family Guy slot, the game isn’t available in every country. You may need a VPN to access the game if you live in a restricted country.

Adult-comedy theme: The game’s adult-comedy theme may not be suitable for everyone. If you love Family Guy, you’ll enjoy playing this game. Otherwise, expect some occasional crude humor.