A relatively recent addition to the sizable catalog of Monopoly-themed slot games offered by WMS (Williams Interactive), Epic Monopoly II brings the fun and excitement of the beloved Monopoly board game to two sets of reels.

The graphics are current, and the game offers a variety of fun bonus features complete with a virtual Monopoly board game. Plus, this slot can offer some decent wins.

A simple burgundy backdrop curtain sets the stage for the two sets of Epic Monopoly II reels, the main reel set, and the colossal reel set. The graphics and symbol renderings are crisp and current, and the background soundtrack plays relaxed and jazzy tunes that are perfect for the Monopoly stage. Game show style announcements call out the game instructions, awards, and commentary, helping to complete the Monopoly stage theme.

The two sets of reels are filled with the same symbols, including the most valuable Monopoly board bonus symbols and Monopoly-themed characters like Mr. Monopoly, the Scottie dog, Miss Virginia Ave., and Mr. Marvin Gardens. Apart from a wheelbarrow full of gold and a pot full of money, the lowest paying symbols on the reels are classic Monopoly playing tokens like the race car, battleship, top hat, and boot.

When stacked Epic Wild symbols cover entire reels on the main set of reels, they transfer to create matching stacked wild reels on the colossal reel set too, helping to pile on the wins. Plus, bonus symbols trigger the Epic Wheel bonus game, which is where this slot gets really interesting.

The Epic Wheel awards scatter pay multipliers when triggered, and the wheel can award monetary prizes, free spins games, special bonuses, more spins on the wheel, and dice rolls in the virtual Monopoly board game.

Each of the mini-games wrapped up in these wheel features are nicely done and entertaining, appealing to the Monopoly buff in all of us. We especially like the virtual Monopoly board game with classic Monopoly features that have been transformed into slot bonuses. 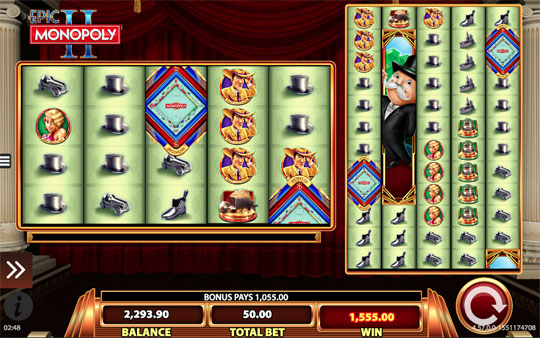 Epic Monopoly II features two sets of reels, a 5×4 main reel set, and a 5×12 colossal reel, with 100 total lines between the two reels.

The 100 lines are fixed, so you cannot choose how many lines to play, but you can select your bet per line to adjust your total stake.

The paytable updates automatically to always display the correct payout values for your current bet. The highest paying symbol on the reels is the Monopoly board symbol, which pays out 5,000 for six matching symbols on a maximum bet and 50 on a minimum bet.

The Monopoly tokens are the lowest paying symbols on the reels, with the racecar, battleship, boot and the top hat paying out 0.05 on a minimum bet and 5.00 on a maximum bet for three matching symbols. 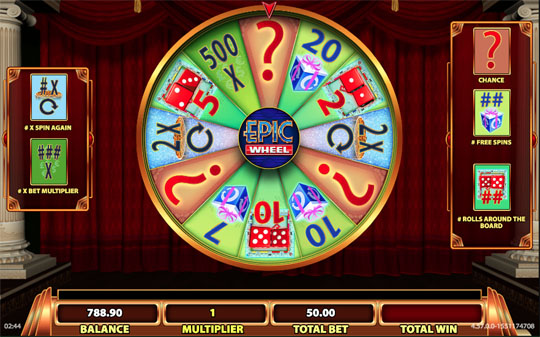 To use the autoplay function, click the autoplay button to select a set number of spins. The auto spins play at a comfortable pace, and it is easy to see your wins before the next spin starts.

Unfortunately, there are no local jackpots and no progressive jackpot options in this game.

“Epic Wild” symbols are the highest paying regular (non-bonus) symbol on the reels and substitute for all symbols except the Bonus symbol.

When four stacked Epic Wild symbols cover an entire reel in the main reel set, a Wild transfer is triggered, and the corresponding reel on the colossal reel set also transforms into an entirely wild reel.

Three or more Bonus symbols scattered across both sets of reels triggers the Epic Wheel Bonus Game that awards a scatter win multiplier and a spin on the Epic Wheel. The payout depends on the number of triggering scatter symbols on the reels.

The Epic Wheel can award a variety of prizes on the spaces on the wheel, including:

The free spins awarded by the Epic Wheel offer the same winning combinations and payouts as the base game. During the free spins, at least three Bonus symbols scattered on the reels retrigger the same number of free spins that were originally awarded. The same multiplier values that are awarded when the Epic Bonus Game is triggered are granted, depending on how many triggering Bonus symbols are on the reels.

Choose a face-down card to reveal a prize. Possible awards are:

Around The Board Bonus Game

In a virtual Monopoly board game, roll the dice to move your token around the Monopoly game board. Prizes will be awarded and features will be triggered depending on where your token lands on the board – like Property cards, Electric Company, Income or Super Tax, Just Visiting, Free Parking, GO, Water Works, Railroad, Community Chest, and Go To Jail.

You get to keep playing the bonus Monopoly board game until you’ve used all of the dice rolls you were awarded.

Epic Monopoly II is ideal for fans of the Monopoly board game and Monopoly slot aficionados. It’s also a good option for players that like the colossal reel game configuration that WMS features in some of their slots, like this one. 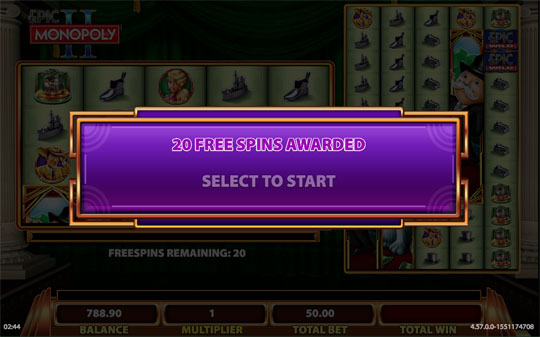 WMS Monopoly slots are all based on the game theme, characters, and features from the Monopoly board game. However, each individual slot game offers different designs, game configurations, and features.

Robust Bonus Features: The various special features on the reels and special mini-games, like an interactive Monopoly game board, keep gameplay engaging.

Epic Wheel: Spin the Epic Wheel (a Wheel of Fortune style mini-game) that awards money, free spins, bonus games, dice rolls on a special Monopoly game board, and more spins on the wheel.

Transferring Wilds: When stacked wild symbols cover an entire reel on the main reels, the wilds transfer to the colossal reel to create a wild reel on the corresponding reel as well, turning one wild reel into two wild reels.

Free Spins Bonus Game: Win up to 20 free spins that can also be retriggered.
Monopoly Board Game (Around The Board Bonus Game) – Dice rolls move your Monopoly token around the game board, landing on the different features found on the original game board that have been transformed into bonus awards. 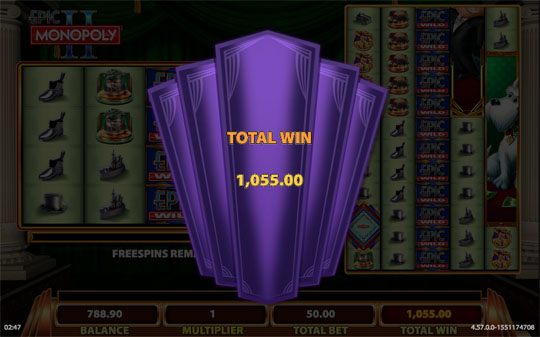 Limited Free Spins Features: Payout values are the same as in the base game, there are no multipliers, and there are no added special features.

Low Symbol Payout Values: Except for the Bonus symbols, the payouts on winning combinations in the base game are relatively low.

Limited Base Game Features: Bonus features in the base game are limited to the transferring Epic Wild symbols. The dual reel action helps to create some action, but otherwise, the main excitement is wrapped up in the special bonus features.