Before ending its run in 2018, Duck Dynasty was one of the most popular reality TV shows for American viewers over the past decade. Fans of the show will be pleased to play the official Duck Dynasty slot machine from Bally Technologies.

Using innovative, curved touchscreen technology, the Duck Dynasty slot features all your favorite characters from the legendary, duck-hunting Robertson family. You can enjoy a wide variety of themed bonuses, jackpots, and more.

Bally has been making slots for U.S. casinos for over 60 years. They are no stranger to developing titles for big licenses, and they’ve given this popular series the feature-stacked slot machine it deserves.

The Duck Dynasty slot machine has a nice triple-screen setup, two of which are high-definition (HD) touchscreens.

If you enjoyed watching the Duck Dynasty series, you’ll have plenty to enjoy here. The symbols include all the show’s main characters, such as Uncle Si, Phil, Willie, Miss Kay, and Korie. There are no standard slot symbols to fill out the roster on this one. The rest of the symbols include ducks, deer, and frogs (wilds).

There are also scatter symbols, including the bonus wheel and the Duck Dynasty logo, which features ducks flying across the screen when you trigger the jackpot win.

There’s a lot going on in this game, and the reels are always busy. This can be a good or a bad thing, depending on how comfortable or experienced you are at playing slots.

The bonus rounds are all themed around the show and feature appropriate video clips and cast voiceovers. Expect such activities as picking fish for cash prizes, shooting bullseyes with Willie, or watching bouncing frog wild symbols zip across the reels during free games.

Lastly, we have the official theme music for the show, ZZ Top’s “Sharp Dressed Man.” If you enjoy dad-friendly classic rock, you should love this. Even if you’re not a fan, tunes from a world-renowned band such as these bearded, Texan rockers make for a better soundtrack than what’s offered by most slot titles. 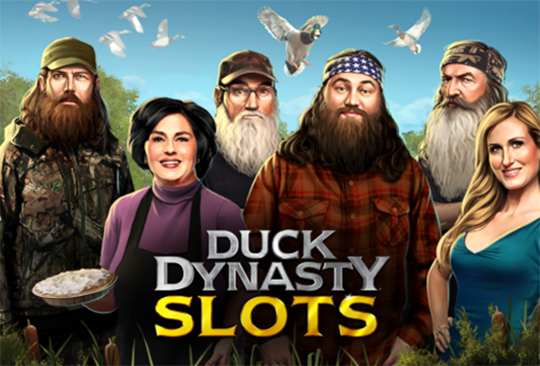 Penny-slots players will certainly be happy with a suitably low minimum bet in place.

This game has a relatively low number of paylines compared to most modern slots. This can lead to many of the same symbols appearing on the reels, without you getting an expected payout. We found this quite frustrating.

There’s only one jackpot in Duck Dynasty. You can win by pulling all five Duck Dynasty logo symbols on one payline.

This progressive jackpot has been known to go up as high as nearly $2 million. It is paid in 20 annual installments, which is interesting and not something we’ve seen stipulated in a slot game before.

However, you can only trigger the biggest jackpot at a maximum bet. Otherwise, you win a slightly smaller prize that scales on your bet. Wilds do not count towards the five jackpot pulls.

There are tons of features in the Duck Dynasty slot, including a massive seven different bonus games, along with mystery reels, clumped wild symbols, and even more extras.

Possibly the single best thing about this game is its enviable collection of additional content. On the downside, the plentiful visual triggers can make you expect a win on the main reels and then not actually get anything.

There are two types of wild symbols in Duck Dynasty. The standard wilds are just that, and they count for any symbol when making up a winning payline.

The second kind of wild is a clumped wild symbol in the form of a frog. If you look closely at the bottom of the reels, a little frog sits there. On random spins, he’ll lick the reel and a clump of frog wilds will appear in that spot.

Lastly, wilds also have a chance to appear as one of the mystery reels, which replace a whole reel with one symbol every few spins.

There are two scatter types on the Duck Dynasty slot. They are:

The Duck Dynasty logo pertains to the jackpot detailed above.

The bonus wheel appears on reels two, three, and four. Pull three of them in one spin, on any lines, and you’ll unlock a spin of the bonus wheel. This gives you one of six different bonus rounds.

The bonus wheel uses a touchscreen system for your spin. However, the game notes explain that the manner in which you spin the wheel has no effect on the outcome. 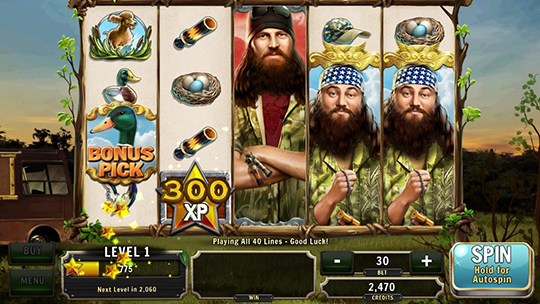 The Duck Dynasty slot has six different bonus rounds available on the bonus wheel, and one extra that may start after any non-winning spin. These are:

Froggin’ Free Games is a simple free spins round on a separate set of five reels, without the Duck Dynasty logo jackpot symbols or the bonus wheel symbol. You’ll get eight to 12 free spins, and extra wilds will appear and remain on the reels after each spin. You can’t pull more free spins to extend your run.

The Duck Prize Wheel unlocks a second wheel for you to spin once. There are three variations of this wheel, with a 1x, 2x, or 5x multiplier. This second prize wheel has prizes between 1x and 100x your stake before the bonus round began, as well as two, three, or five more spins of the wheel. Top prizes go up to 500x your stake, or $22,000 at max bet.

Willie’s Bullseye Bonus is an archery-themed game. You and Duck Commander CEO Willie Robertson each shoot one arrow into a target, for cash multipliers on your original stake.

There are five rings to the target. You’ll bag 1.3x your bet if either arrow hits the outer target, and up to 666x your stake if either of you gets the bullseye. Your prizes are added together at the end of the round. You can pull back and fire using the touchscreen if you wish, or you can press the spin button.

The Si Show bonus is another wheel game. Here, you can get 0.75x to 66x your initial bet before the bonus game, as well as a multiplier (1x to 7x) on that. This means a total win is possible of 462 times your stake– just shy of $29,000 at a maximum bet. You only get one spin per bonus game on this wheel.

Fishing for Credits is a pick ‘em bonus game with an interactive twist. You’ll get three attempts to cast your onscreen fishing rod into a virtual lake. Just pick one of the six bait types beforehand to reveal a multiplier between 1x and 10x.

Cast your rod, and it will come back to you with either nothing or a fish. Bag a fish, and you’ll get a prize of 0.5x to 3.3x your bet, which is then multiplied by what you got for the bait. If you pull nothing, you’ll get 0.25x your bet and a multiplier anyway.

The Lucky Duck’s Bonus has you use the iconic Duck Commander call to persuade ducks to land in a virtual yard. Pick from five different duck calls to get a prize of 0.75x to 2x your bet, and then use the touchscreen to call a duck.

Click the duck to reveal a multiplier of 2x to 20x. This means the highest win possible is $1800 at a maximum bet.

The Duck Dynasty slot game is obviously suited for fans of the series. With bundles of official videos, music, and themed bonus rounds, Bally has done a great job with the license.

Aside from that, this game is relatively busy for slots newcomers. However, it is also too variable and has no customization or auto spins for more experienced players. 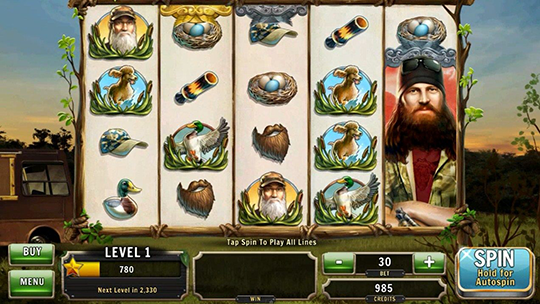 Big license, done well: If you like the Duck Dynasty show, you’ll enjoy this game. Bally secured a good number of official features, such as video clips and musical pieces. They also themed the bonus rounds nicely.

Loads of features: Seven different bonus games is a lot packed into one slot machine. Add to that all the wild and scatter symbols, and you’ve got a game that will stand the test of repeated play.

Progressive jackpot: With prizes in the millions often available (and at a reasonable max bet of $45 per spin), the Duck Dynasty slot has a decent value jackpot.

Intense action: This can be a good thing, but this slot left even us a little confused about whether we’d pulled a win on the reels or not. With so much going on, it could prove a little too much for newer or casual slots players.

No auto spin: No auto spins and no customization of paylines means dedicated players may find this title lacking in advanced options.