Konami is a large Japanese company based in Tokyo. They are most known for creating massive hit videogames such as the Metal Gear Solid and Silent Hill series.

However, they also produce gaming cabinets and slot games. One of their most iconic arcade titles is the hugely successful Dance Dance Revolution.

As for Dragon’s Law – it’s a solid game with fancy Asian stylings and a high maximum bet. Other than that, this title doesn’t innovate in many ways.

Considering Konami is a Japanese company known for its distinctive visuals, we expected a little more from an Asian-themed game like Dragon’s Law.

What you get here is basically the standard Asian iconography that appears on most slot games of this style. Symbols that populate the reels include:

Nothing too original here. The rest of the symbols are made up by the standard slots’ icons of K, Q, J, A and the numbers 9, and 10.

The whole game is smoothly done but not unique or innovative in any way. The same goes for Dragon’s Law’s bonus features and animations – such as the titular mythical lizard that flies across the reels to drop extra Wilds.

They look decent enough but don’t break any new ground.

Lastly, we come to the music – of which there was barely any. Only the clicking sounds of the reels, the “ka-ching!” of a win or the whoosh of the bonus symbols accompany your gameplay.

The only music that played was a short clip at the beginning of the bonus round and after a big win.

You won’t find many slots on the modern market with as small a collection of jingles as this.

Dragon’s Law includes 30 paylines and five reels. Players place bets per line, which are then converted into an overall bet.

This is so the slot can add a 50% charge to the total bet.

For example, players who bet $1 per line will find that this game bumps their overall bet up to $45. That’s despite the fact there are only 30 lines, so the expected bet would be $30.

We understand this approach in a game with a lot of features and bonus rounds. However, considering Dragon’s Law offers only one bonus round and a few extra ideas, we felt a 50% addition on overall bets was a little steep.

Uniquely, players here can also choose to bet one, two, five or 10 times per line. This is an interesting system that isn’t seen often on online slots.

This is quite a wide bet range. It also makes Dragon’s Law into a great title for high-rolling players. $450 is one of the highest per-spin bets you will find at an online slot.

There’s also an auto spin feature available, which is a nice option. However, the auto spin here only includes one setting. That’s a hefty 500 spins, which must be manually stopped by the player.

Lastly, Dragon’s Law has a Return-to-Player, or RTP, of 96%. This puts this Konami title firmly in the upper-middle tier of online slots.

There are no jackpots on Dragon’s Law.

In the modern slot marketplace, not offering a designated jackpot prize seriously hurts any given slots chances of staying at the top of the pile.

The highest prize possible on one line of the main reels may be $10,000 – but that doesn’t make up for the lack of a signposted or fixed jackpot.

Dragon’s Law features one Wild symbol, one Scatter symbol and one bonus round.

There are two additional mechanics that occur based around the Wilds though: stacked Wilds and the Dragon’s Law extra feature.

Dragon’s Law’s Wild Symbol is a Golden Star. They act as standard Wilds – they replace any other symbol to make a winning line.

They can also appear as a stacked Wild, meaning they randomly take up a whole reel after a spin. This can lead to some decent wins.

The biggest wins, though, are on the Dragon’s Law extra feature. This can occur randomly after any spin, and it adds an unspecified amount of extra Wild icons to the spin.

Unlike most scattered Wild bonuses in other slot games, the Dragon’s Law feature can even occur in a round where a bonus trigger is pulled.

The scatter symbol here is the Yin Yang icon. Pull three or more of these to trigger the bonus round as well as a prize.

The prizes are as follows:

Should a Wild golden star land on one of the Yin Yang symbols during the Dragon’s Law feature, it also becomes a Wild.

There’s only one bonus round on Dragon’s Law, and that is a Free Spins round.

You can also extend your free spins run by pulling more bonus symbols on any spin.

Free spins are played on the same overall bet and bet per line as the spin that triggered the bonus.

It should also be attractive to players with larger budgets as $450 a spin is well above the average maximum bet available online.

As a Japanese company, Konami has created a lot of slots with an Asian twist. Just a few oriental-themed games from this developer include:

On top of that are at least a dozen more. That’s quite a collection, meaning there should be Asian-themed slot game from Konami to suit almost any player.

High Maximum Bet: $450 a spin is certifiably one of the highest you’ll find online. Even the most high-rolling slots players should be happy with this limit.

Legendary Developer: Konami is a massive name in the videogame industry, giving weight to any forays they make into the slot market. Being an Asian-based developer, it also adds some authenticity to the theme. 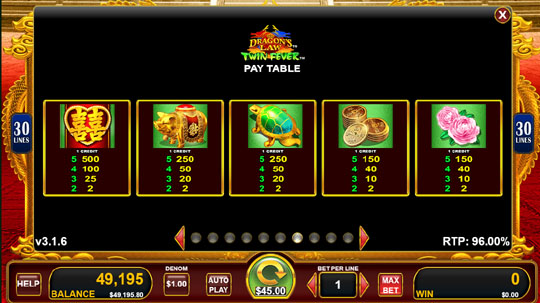 50% Extra on Bets: This kind of extra on each spin is usually reserved for big-budget titles with dozens of extra features and bonus rounds.

Dragon’s Law, on the other hand, features a decent number of additional mechanics but only one bonus round. For us, it was hard to justify the mandatory extra bet money based upon that alone.

No Jackpots: The lack of designated big-money prize here was a bit of a letdown really. Especially in a title with such a high maximum bet.