Diamonds of Athens is a six-reel, 40-line slot based on Greek mythology. It was released by High 5 Games in 2012 and is available for online play.

This game blends lots of diamonds with fabled creatures, like the Minotaur and Cyclops. It’s an odd combination considering that Athens, Greece has never been known as a diamond hub. However, the combo works to satisfy those who appreciate both common slots elements and mythology.

Diamonds of Athens appears to revolve around the tale of Theseus and Ariadne. Theseus, the hero-founder of Athens, defeated the Minotaur and earned Ariadne’s affection.

However, it’s also possible that this game is simply based on mythological creatures and a generic warrior and princess. After all, Theseus never encountered a Cyclops in his journeys. The theme can be open to interpretation, especially as the characters aren’t named in the pay table.

This game offers entertaining animations during wins. Examples include:

1. The Minotaur blowing steam out of its nose.
2. The princess’ necklace flashing.
3. Diamonds exploding out of the wild symbol.
4. The warrior pointing his sword.

The setting is an ancient outdoor patio with classic Greek architecture. Columns, marble, stone, and plants can all be seen behind the reels. Our only complaint about the background is the brown marble floor, which looks like muddy water.

A generic tune plays while the reels are spinning. However, the audio element is balanced out by unique sound effects during wins and high-energy music during free spins. 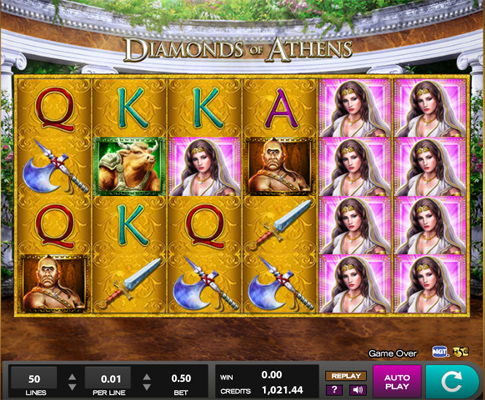 Unlike many High 5 slots, Diamonds of Athens offers multiple gameplay options. Autoplay can be used to make the reels spin automatically for 5-25 spins. Replay lets you rewatch the previous spin, which is fun to do after a big prize. The sound can be turned on/off with a speaker button.

The return-to-player (RTP) is 94.9%, which is slightly below average for an online slot. The highest possible win is $5,000 for hitting six wild symbols. This top prize isn’t too impressive considering that you must bet $10 per line to attain it.

What jackpots are available in Diamonds of Athens?

No jackpot is available in this slot, which is made worse by the fact that the top overall payout is just 500x the line bet. The next-largest prizes are 250x and 125x. Significant wins are heavily reliant on combining features with a large wager.

Diamonds of Athens doesn’t offer huge single prizes. The good news, though, is that it provides features that boost payouts.

The Diamonds of Athens logo is the wild symbol. It substitutes for everything except the diamond scatter to form wins. The wild icon also offers most of the game’s biggest payouts. Its prizes include 1,000x for six symbols, 250x for five, 125x for four, 20x for three, and 5x for two. 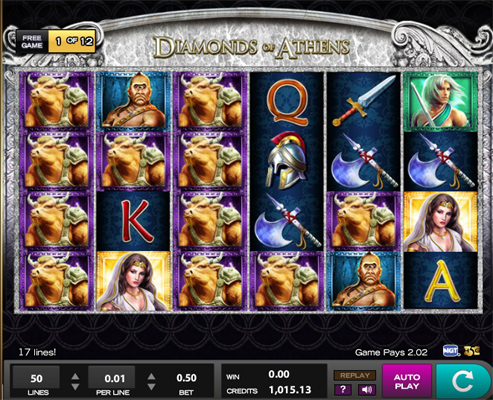 This game includes Super Stacks, which are reels full of the same symbol. The game can randomly choose one or more symbols to become Super Stacks during a round. Your chances of winning big improve when landing multiple Super Stacks of the symbol in adjacent reels.

The scatter symbol is the diamond, which appears in reels two, three, four, and five. It triggers free spins when landing anywhere on the reels 12 or more times. Unfortunately, the diamond doesn’t deliver scatter payouts, which are common in many other slots.

The bonus is more entertaining than the main game because it features music. The tune doesn’t match the game’s theme – it sounds like something that would play in a Middle-eastern market. Nevertheless, this uptempo music adds something to the free spins. Note that the reels spin automatically during this bonus.

Who is Diamonds of Athens ideal for?

Anybody who likes small stakes and low volatility will appreciate Diamonds of Athens. Players can bet just one cent (one line/$0.01 line bet) per spin or play all 50 lines for $0.50. They can also look forward to lots of wins thanks to the Super Stacks. This game gains bonus points among those who are fascinated by Greek mythology.

Players who enjoy chasing big jackpots should steer clear of this slot. It includes no jackpot and features a low top payout. The only way to earn huge wins is by placing a high line bet and getting lucky with features. 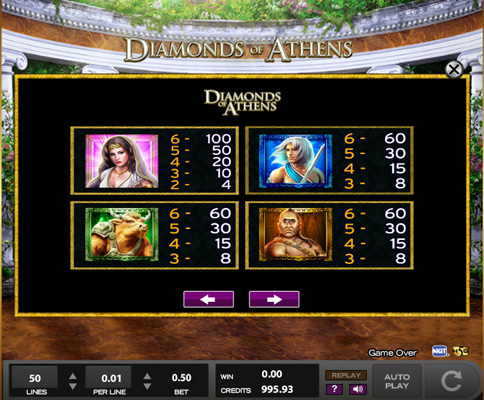 Like many developers, High 5 Games has produced several slots based on Greek mythology. The Mighty Atlas and Olympian Epic are two titles that are comparable to Diamonds of Athens.

Olympian Epic, which was released in 2018, centers on Greek gods and goddesses. It offers a similar experience in terms of the setting and stacked symbols but boasts superior graphics. The Mighty Atlas is a quirky slot that casts Atlas as a ladies’ man. It features stacked symbols, free spins, and quality graphics.

Low bets: Diamonds of Athens offers a flexible betting structure that ranges from $0.01 to $500 per spin. The adjustable lines come in handy considering that there are 50 lines in this game.

Solid options: High 5 isn’t known for producing games with many options. However, Diamonds of Athens comes through with helpful and entertaining features like autoplay and replay.

Low volatility: The Super Stacks and abundant wild icons lead to plenty of wins. This game is perfect for anybody who wants to get more play out of a small bankroll. Free spins also occur frequently and provide a nice bankroll boost.

Small payouts: The highest payout is only worth 500x the line bet, and most of the other prizes are much smaller.

Subpar graphics: This isn’t the ugliest slot we’ve seen. However, some visual elements don’t stack up well in comparison to other games. The brown marble floor (background) and Cyclops are two examples of poor detail.

Generic music: The music that plays during free spins is an entertaining tune. Unfortunately, you’re mostly stuck listening to the uninspiring music from the main game.