IGT has been making slots for nearly three decades, and Da Vinci Diamonds has been one of their most popular titles in land-based casinos for many years. Today, you can play this five-reel, 20-payline slot at online casinos as well.

Leonardo Da Vinci was one of the most famous artists of the Italian Renaissance period, and he remains popular in the modern era. You’ll see symbols depicting some of his most iconic works in this slot, including the Mona Lisa.

Da Vinci Diamonds pairs the master craftsman’s celebrated paintings with images of jewels, such as rubies and jade. The full list of symbols also includes:

There are loads of nice details. For example, even the edge of the screen is designed to look like a painting frame.

One thing you will notice instantly is the unique base mechanic this slot uses. Instead of spinning reels, each click of the spin button blanks the screen before symbols fall from the top and fill up the reels. Imagine square-shaped Tetris blocks to get a feel for how this looks.

Any winning lines will then disappear, and new symbols will come tumbling down to replace them, potentially forming another set of winning lines. Not only does this add a novel twist to the gameplay; it looks great as well.

However, we weren’t particularly enamored with the soundtrack in this title, mainly because there wasn’t one on the main game.

The only sound this game plays during the spinning of the reels is a skittery clicking, and then a nerve-jangling bell ringing when you pull a winning line.

Because winning lines can provide multiple more wins after the first, which can go on for a quite a while, the bell ringing quickly gets annoying.

We expected some sort of choral or classical music to accompany a Da Vinci-themed slot game, so this was a disappointment.

On the other hand, that’s the exact kind of music you get during the bonus round. Why IGT chose not to have the same standard of music throughout is a mystery to us. 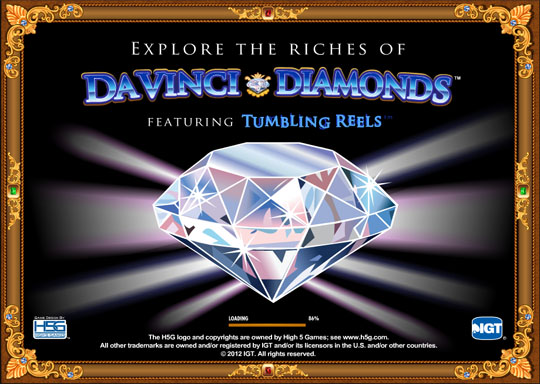 Da Vinci Diamonds has five reels and 20 paylines. You can only choose your bet per line and are unable to adjust the number of paylines on which you bet.

You can also get some big-money wins on the main reels without hitting a bonus. This is because of the unique tumbling reels mechanic we discussed earlier.

That gives you the possibility of sequential wins that can stack up nicely. The maximum single-line win is a flat rate of $5000 for pulling five Da Vinci Diamond symbols. This is the only prize that doesn’t change with your per line bet.

The return-to-player (RTP) on this slot is 94.4%. This puts this title firmly on the lower end of IGT’s slots, but it certainly isn’t among the very lowest you’ll find online, either.

There are none, which is always disappointing for an online slot. The fixed prize of $5000, which you win for pulling five Da Vinci Diamond scatter symbols, isn’t really enough to make up for this. IGT can definitely do better.

There’s quite a range of symbols and extras on Da Vinci Diamonds, as the bonus reels have their own unique set of additional icons. However, there’s only one bonus game. 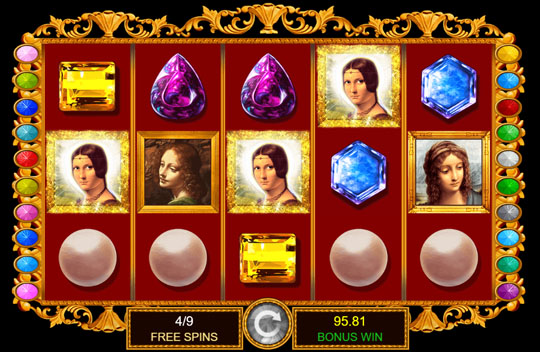 There’s one wild symbol, which is helpfully labeled as wild. It doesn’t do anything other than act as standard wilds when replacing any other symbol in a winning line.

Wilds do interact with the tumbling reels feature, however, meaning you can pull several wild wins in a row off one spin if you’re lucky.

There are two scatter symbols in this IGT title:

Da Vinci Diamonds give you a fixed prize, no matter your bet, for pulling three or more of them in one line. This starts at $100 and goes up to $5000.

The Jeweled Bonus symbols give you access to the bonus round. This is essentially a free spins round, but it takes place on a different set of reels with added unique symbols. Just pull three or more of them in one payline to trigger the bonus.

The bonus free spins round gives you six free spins on a different set of reels, made on the same bet you applied when the bonus launched.

The extra icons include various jewels and parts of more renowned Da Vinci paintings, such as:

The three paintings are extra scatter symbols and pay out a higher rate for a line than the standard jewels. 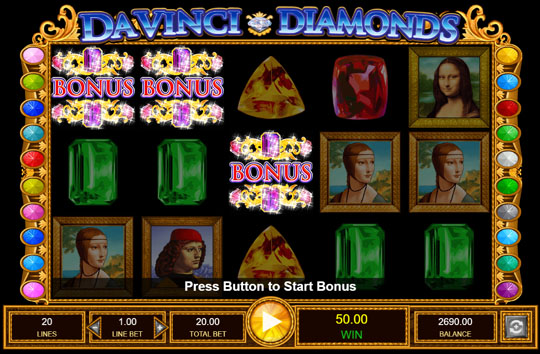 The tumbling-reels system also remains in effect during your bonus round, meaning you can win multiple times on one free spin.

You can also pull more bonus round symbols to add between two and 15 spins to your run. Pull five symbols, and you’ll be guaranteed at least an extra six spins.

The bonus round ends when you run out of spins or reach the maximum amount of 300.

Da Vinci Diamonds should appeal to fans of history and fine art. Leonardo Da Vinci had a renaissance (excuse the pun) in popular culture a few years back, after the release of Dan Brown’s best-selling book, The Da Vinci Code. Anyone interested in his works should enjoy this game.

In terms of the gameplay, this title offers a unique tumbling-reels system that will satisfy even the most jaded of slots players. It also boasts a very strong bet range, starting very low and going up fairly high, too. This means a broad variety of budgets will be catered to here.

Unique tumbling-reels mechanic: This interesting design choice certainly adds an extra dimension to Da Vinci Diamond’s gameplay. Anything that makes multiple ongoing wins possible on one spin is good by us.

Novel theme: We couldn’t find any other fine-art-inspired titles by IGT. The Italian master is a fitting subject for a slot game, and recreations of his iconic paintings make for great symbols. 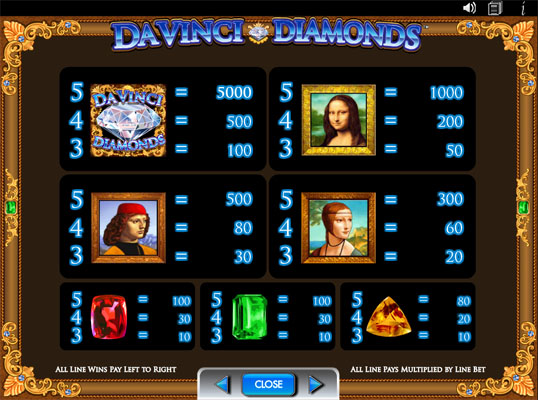 Top-tier bet range: At $0.20 to $400 per spin, this slot should suit almost any budget and is more flexible than many competitor slots.

Poor music on main reels: With more-than-decent music on the bonus rounds, why the main reels had to have such a jarring, bell-ringing soundtrack is beyond us.

No jackpot: In a competitive market like today’s, slots need a designated big-money prize to compete with the top titles. We found Da Vinci Diamonds lacking on this front.

Only one bonus round: With such an interesting theme, we expected more from IGT than just one free spins bonus round. For example, a painting-based pick ‘em game, or a sculpt-the-statue bonus reveal are just two ideas that could have been nice to include.