This magical forest, soaked in soothing blue and purple hues, is dense with beautiful growing crystals and mystical creatures like fairies and unicorns. As a departure from loud and action-packed slot games, Crystal Forest is an almost ethereal and relaxing game to play.

The five most valuable regular symbols (fairies, unicorns, butterflies, ladybugs, and mushrooms) can create winning combinations with matching symbols or mixed combinations with any of the five different symbols.

Other woodland creatures fill the reels like rabbits, flowers, and toadstools, and symbols like magic wands, flower wreaths, fairy lanterns, and firefly bottle lights are the lowest value symbols on the reels. You won’t see a single playing card symbol in Crystal Forest.

A meter on the left side of the reels gets activated when the minimum number free plays are activated and continues to track how many free plays are awarded if the number increases, up to a maximum of fifty free plays. Jackpot symbol hits are also tracked next to the free play meter.

The game sounds are ethereal and new age with some forest animal sounds mixed in, making for a textured and relaxed backdrop that feels pretty appropriate for the game. 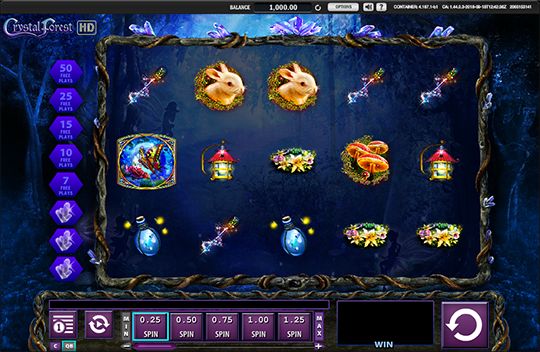 Choose your bet value per line (Bet/Line) by using the up and down arrows in the “Classic” screen view. Or, choose your Total Bet per spin by using the slider bar in the “Quick Bet” view.

The paytable is dynamic, so when you change your stake the paytable changes to display the accurate payouts for the current active bet value. The jackpot symbols are the highest paying symbol on the reels, which pay out 7.50 on a minimum bet and 3,750.00 on a maximum bet for five matching symbols.

Autoplay options can be customized for a maximum number of spins, number of minutes played, win amounts, stakes, and changes to your account balance. The reels spin at a comfortable pace and all of the win lines and the total win are clearly displayed before the next spin starts.

The RTP (Return-To-Player) percentage for Crystal Forest is a solid 96.00%, which is average compared to other WMS games. 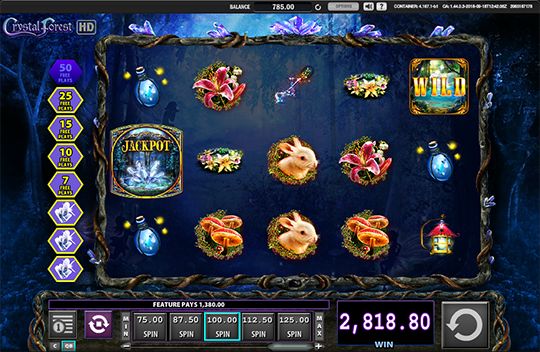 Symbols displaying crystal formations and the word “Jackpot” pay a jackpot prize. The “jackpot” values vary depending on your active bet and how many jackpot symbols land on the reels.

These jackpot values are not on par with the big jackpots that many slot enthusiasts seek out, and there are no other progressive or local jackpots available in this game.

Cascading reels are responsible for most features in this game. The cascading reels can trigger multiple new winning combinations on a play and trigger the free plays bonus game.

Wild symbols display the word “Wild” over a beautiful grotto background. Wild symbols can appear as single symbols or as stacked symbols that can cover an entire reel. Wild symbols substitute for all symbols and are on every reel, except for reel one.

Free “plays” are awarded when at least four consecutive winning combinations land on the reels during a “play”. Icons on the left of the screen light up indicating how many free “plays” you qualify for as the reels cascade. 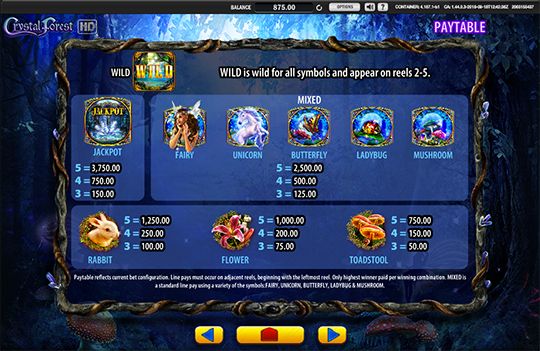 Free plays can be retriggered. During the free plays, at least four consecutive cascade wins award additional free plays that will be added to the remaining free plays. Winning combinations and payout values are the same for free plays as in the base game.

Although fans of the original Crystal Forest land-based casino slot game may be surprised that some of the familiar symbols are different in this online HD version of the game, there are many visual enhancements for seasoned Crystal Forest players to appreciate.

The serene theme and soothing sounds would also be ideal for players who are looking for a more relaxed playing experience and a game this is easy to play. On the flip side, this would not be a good match for players looking for a game that is high on action and advanced, interactive features.

Crystal Forest is a rare online HD game release with a relatively unique theme for WMS. However, despite boasting an entirely different theme and some aging graphics that are definitely not HD, the game specs and features in Invaders from the Planet Moolah are almost identical to those in Crystal Forest.

The Invaders from the Planet Moolah slot stars intergalactic cows that have descended upon a farm to zap winning combinations off of the cascading reels (and suck the farm animals into their spaceships). Both games share the same structure, cascading reels, free play awards, jackpot values, and the same payouts for winning combinations on the reels. The two games also share the same Return-To-Player (RTP) value of 96.00%. 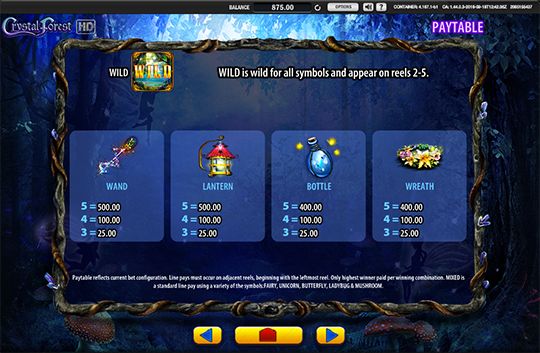 HD Quality – The graphics are of high definition quality.

Free Spins Bonus Game – Up to 50 free spins are triggered (and retriggered) by consecutive wins on the cascading reels, instead of by scatter symbols.

Stacked Wild Symbols – Wild symbols can be single wilds or randomly stacked on any spin to fill up an entire reel (or multiple reels).

No Playing Card Symbols – The reels are filled with Crystal Forest themed symbols, without a playing card symbol in sight.

Easy To Play – The options and features are simple enough for anyone to play.

Small Jackpot Values – The jackpot symbols on the reels do not award huge jackpots. Instead, the “jackpot” values are the highest paying symbol on the reels.