Cirque Du Soleil is a five-reel 40-line slot from Las Vegas’ Bally Technologies, a company that has been creating slots for US casinos since the 1930s. Cirque Du Soleil is just one of Bally’s prestigious pop culture-licensed slots.

If you don’t like clowns, you’ll be out of luck with this slot. However, if you don’t have a problem with strangely dressed sad comic performers, then you may enjoy the visual and thematic aspects of this title.

The symbols here are all in the style of the fantastical, baroque circus. Smiling clowns in elaborate costumes are the recurring theme, alongside the usual slot symbols of K, A, P, and Q.

Bally went all out on this title, creating a bucket-load of flashy animations that offer a true riot of color. A graphical animation flashes across the reels almost every other spin.

This happens so often that several times during our playtesting, we thought we’d pulled a winning line because of the animations, only to swiftly find out we’d won nothing. However, that’s a small price to pay for such an aesthetically impressive experience.

The background music is entrancing too, although it takes a while to warm up. Well-produced and varied enough to keep things interesting, the tunes here are better than what plays at most slots – short of big-license music titles, of course.

There are 40 paylines on the Cirque Du Soleil Kooza slot. Unfortunately, players can’t change the number of lines they bet on, and there’s no option to superimpose the lines on the reels. Instead, players who want to see the lines need to open up the game’s infobox and flip to the last page.

However, Bally has made sure to appeal to a more experienced audience with the rest of this game’s mechanics. The reasonably high maximum bet of $300 a spin should suit even fairly high-rolling players, as should the auto spin feature, which lets players spin five, 25, 50 or 100 spins at a time.

This is an extra worth pointing out as auto spins are highly useful to some players, and the option isn’t available in all slot games.

Finally, the Return-to-Player (RTP) of Cirque Du Soleil Kooza is 96%, which is not bad for a Bally slot game and puts it firmly on the upper end of the middle tier. 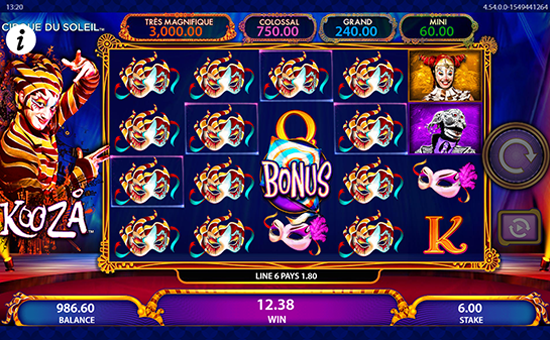 This slot title offers four scaling jackpots that can only be won through their own mini-game, which can be accessed through the Bonus Wheel. These four jackpots are:

At the maximum bet, players can bag a top-tier jackpot of $150,000. This is not a shabby prize in itself; however, considering the maximum bet is $300, many jackpots out there offer better value for money.

To win any of the jackpots, players must pull three or more bonus scatter symbols on a single spin. Then, they need to hit the Jackpot segment on their Bonus Wheel spin to trigger a single spin on a second Jackpot Wheel, which determines the prize.

The Wild Symbols in this game don’t appear as frequently as they do in many other games, which is probably because of the extra scatter symbols and the Mystery Reels. They are standard Wild symbols that count for any other symbol when making a winning payline.

Occasionally, Wild symbols come clumped together on the reels.

There are three scatter types in Cirque Du Soleil Kooza:

The Bonus symbol is self-explanatory – pull three of them in one round to unlock a spin on the Bonus Wheel.

The Bonus Box, on the other hand, appears on reels two, three, and five. Pull three of them in a spin to unlock a Box Pick bonus feature. You get one pick from one of three boxes, which reveals either a cash prize or a Bonus Wheel spin. Prizes range from $30 to $500. 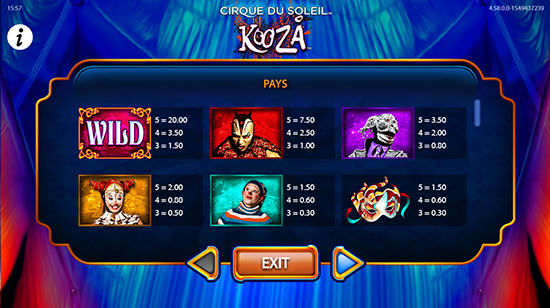 Mystery Reels occur every few spins. They turn one to four reels into a block of the same symbol, making big wins possible across multiple lines – especially when you pull four at once.

The main bonus round in Cirque Du Soleil Kooza is the Bonus Wheel Spin. You get one spin of the wheel, with a chance at winning the following prizes:

Each of these Free Games offers 2x your stake in cash and ten spins of the main reels, with some bonus features. In the Trickster Free Games, a Trickster clown may scatter extra Wild symbols across the screen during your spins.

In the Wheel of Death free games, each of your spins is awarded a 2x to 4x bonus on all wins. An extra scatter symbol is added to the reels during these rounds – the More Free Games symbol. Pull three of them on a single free spin to potentially add seven to 14 more free spins to your run.

Cirque Du Soleil is wildly popular around the world and plays to average audiences of over 9,000 people almost every night in Bally’s hometown of Las Vegas. This slot will likely appeal to the many fans of the circus.

Cirque Du Soleil Kooza is also a relatively high-rolling slot title for Bally that comes with auto spins. This makes it highly suitable for more experienced slots players, although its low-end bet of just $0.40 should also make it attractive to lower-budget players. 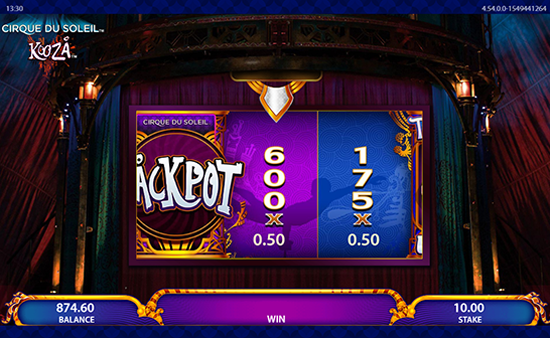 Top-tier License: Cirque Du Soleil is a massive brand, and Bally used the license well. If you enjoy the theatrics of circus performance, this slot should be the right choice for you.

Betting range: With a minimum of $0.40 per spin and a $300 per spin maximum, Cirque Du Soleil Kooza offers various wagers to suit all budgets.

Plentiful Animations & Extras: Animations occur very frequently in this game, and there are even more of them in the four bonus rounds. Confetti shooting cannons, dancing trapeze artists, and more await.

Lines Can’t Be Customized and Can Be Confusing: With all the mystery reels and symbols available, it would be helpful to be able to see the lines in the Cirque Du Soleil Kooza slot. During our test run, it sometimes felt like a winning line had come out of nowhere, and at other times, it looked like we should have hit a win but got nothing.

Lower Value Jackpot: While $150,000 is not a small prize, it can’t compete with Bally’s biggest jackpot titles, let alone the big-money progressives from rival companies such as NetEnt. It’s also a scaling jackpot that doesn’t offer the most value considering the relatively high maximum bet.