The online version replicates the console game perfectly, appealing to fans of the original and to those who appreciate authentic casino slot games.

Choy Sun Doa, the God of Wealth, graces the reels as a wild symbol to help you score more wins. The wild symbol also awards wild multipliers in the free spins bonus games when part of a winning combination.

The God of Wealth is surrounded by other Chinese good-fortune symbols, including golden dragons, which offer the highest payouts, followed by lucky coins and jade rings. Koi and red envelope symbols also boast some higher paying combinations.

Golden ingot symbols are particularly lucky as they trigger the free spins bonus games. Playing card symbols (nines through aces) round out the reels as the lowest value symbols.

The online game looks and sounds the same as the original casino version of Choy Sun Doa. A Chinese mountainscape forms the backdrop, and the reels are adorned with golden dragons.

Aristocrat stayed faithful to the casino slot game when creating its online replica, and the slot has not been updated to compete with new games designed for the online market. Fans of the original are sure to appreciate its authenticity.

If you are not familiar with the casino slot, you may find the design and gameplay to be dated and limited. 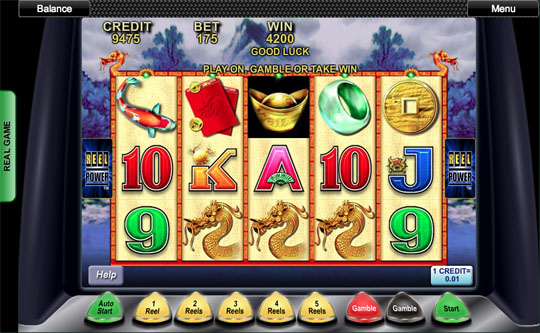 In Choy Sun Doa, you can choose how many reels / ”ways to win” to play:

You can also choose from three different bet levels of one, three, and seven credits per spin in free play mode. To play, select the number of active reels you want, your bet per reel, and the coin value. Coin value options are $0.01, $0.02, $0.05, and $0.10 in free play mode, and minimum and maximum bets range from one credit up to 175 credits.

The paytable is not dynamic, and it only represents payout values for one-credit bets. You can multiply the values by your line bet to see what the payouts are for the higher bet levels.

Like other similar Aristocrat slots, Choy Sun Doa offers an auto start button that sets the reels spinning until you click the auto start button again (or once your balance is depleted). Auto spins can also run too fast for comfort, and there is no way to adjust the speed.

The return-to-player (RTP) percentage for this game is a solid 95.00%, which is average compared to other Aristocrat slots. 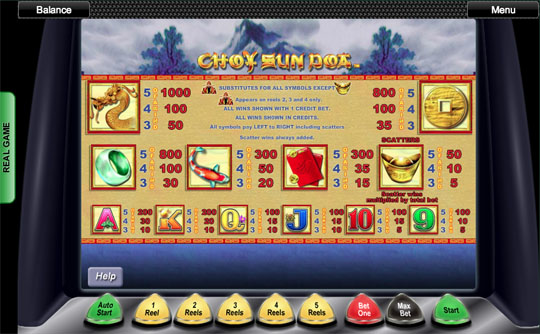 The Choy Sun Doa slot game found on casino floors can feature local jackpot games, helping to make it a particularly popular slot. Unfortunately, the online version of the game does not offer any jackpot options.

The bonus action in Choy Sun Doa revolves around the free games bonus feature, where you can choose from five different games that award different combinations of free spins and multiplier options. Bonus features are sparse outside of the free spins bonus, compared to more feature-rich slots developed specifically for online players.

Symbols depicting the “God of Wealth,” Choy Sun Doa, are wild in the base game and the free spins games. During the free spins bonus games, wild symbols also award multipliers when they are part of a winning combination.

You can retrigger the free spins bonus game, and the new bonus game will start after the triggering game ends. You can select which of the five different bonus games you want to play for the new game as well. 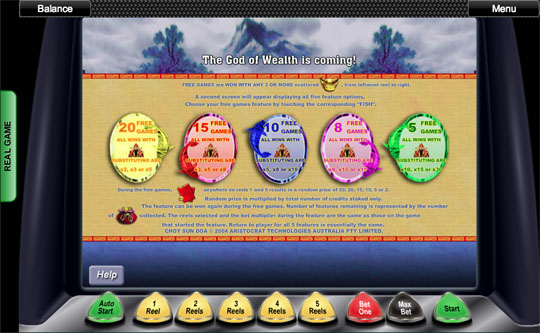 During the free spins bonus game, red envelope symbols that land anywhere on reels one and five award bonus prizes of two, five, ten, 15, 20, or 50 credits, which are multiplied by the number of credits played on the triggering spin.

You can collect your winnings or continue to gamble your new total balance up to a maximum of five times. If you don’t win a bet, you lose the total gamble amount including the original win, and the gamble feature ends.

Just like Choy Sun Doa is a popular penny slot at land-based casinos, the online version of the game is perfect for low-budget, penny-slot players as well. The low stakes and simple gameplay could be a good match for beginner players.

Other Aristocrat slots that feature Chinese-good-fortune and wealth themes include Double Happiness, Lucky 88, 5 Dragons, and 50 Dragons.

The most similar to Choy Sun Doa is 5 Dragons, with both games featuring similar symbols like golden dragons, lucky coins, and koi. The slots have similar bonus features, including a choice of five different free spins bonus games.

Unlike Choy Sun Doa, where you can choose how many reels and ways to win you want to play, 5 Dragons is played on a set five reels (with 243 ways to win), plus a +Extra bet that can award extra free spins in the bonus game.

Despite a similar Chinese theme and symbols, 50 Dragons pays on standard paylines instead of the “Reel Power” feature on the 5 Dragons and Choy Sun Doa reels. The 50 Dragons slot also does not offer different bonus game options but instead awards ten free spins with extra wilds on the reels. 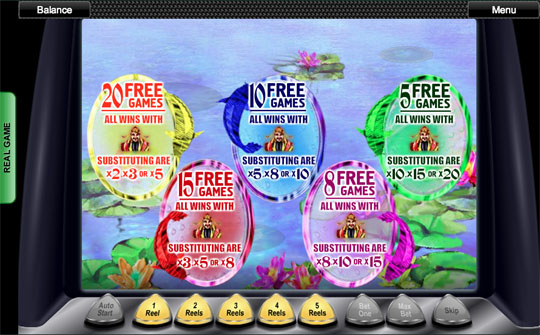 “Reel Power”: With Aristocrat’s “Reel Power,” choose how many reels, with how many “ways to win” you want to play. Instead of traditional win lines, matching symbols can land anywhere on adjacent reels to create winning combinations. Play five reels with 243 “ways to win,” compared to the five reels with 50 paylines found in many slots.

Easy gameplay: The options and features are simple enough for beginner players.

No jackpots: Choy Sun Doa casino slot fans could be disappointed that there aren’t jackpots in the online version of the game.

Glitchy gameplay: The reels can be glitchy and inconsistent, even though the graphics are relatively basic.

Basic animations: The animations are sparse and dated.

Fast auto play: The spins run quickly, and the win totals are often cut off prematurely by the next spin.