China Shores has been in play since 2008 as one of the most durable of Konami Games’ titles. It was first trademarked in 2008 and recently celebrated its 10th anniversary in existence.

With a theme that takes players to the peaceful shores of China, this slot has become such a fan favorite that it spawned numerous offshoots, such as China Shores Double Winnings, Boosted Wins & Spins, Boosted Riches, and Great Stacks. But the basic 5-reel slot game on a KP3+ platform remains a staple in most casinos by player demand.

The game is a pleasurable mix of a peaceful Chinese shore and wild panda symbols. The screen lights up with the presence of golden turtle and bright blue pots, pink lanterns and Chinese symbols, all combined with the 9 and 10, Jack, Queen, King, and Ace.

The random spins bring a fresh combination and draw the player’s eyes across the screen to the soothing yet vibrant colors. The pandas are a welcome sight, as they serve as wilds, and the black and white yin-yang symbol puts it all into perspective by triggering the bonus options.

The yin-yang is true to its deeper meaning, as hitting that bonus offers the player a choice. There is a randomly-chosen mystery prize shown on the left side of the screen and free spins on the right, giving the player the choice of credits or the available free games. It puts the player in the driver’s seat and keeps him or her coming back to see if they would make the same choice again. The Balance of Fortune, as its called, is an apt name for the special feature.

A lack of background music is a missed opportunity to tie the theme with a relaxing melody, but the excitement of the game makes up for it. 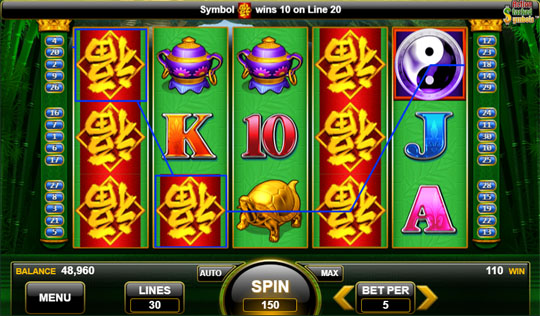 There are 30 paylines on the 3×5 reel-filled screen of China Shores. Paying lines start at the left reel, and the highest win on each line pays. All wins on other lines are added to the original pay.

China Shores has a minimum bet of $0.30, which is the 30 lines multiplied by the lowest bet per line of one. The subsequent bets per line are two, three, four, five, eight, 10, 20, and 50. The maximum bet of 50 lines puts the highest bet at $15.00 on a penny machine. All balances are shown in credits, not currency.

The yin-yang symbol is the trigger and must start in the left-most reel and appear in at least two subsequent reels. Three reels of triggers provide the option of eight free spins or the random credit, four reels offers ten spins, and all five reels with yin-yang symbols award a minimum of 15 free spins. If there are additional yin-yang symbols on each reel, the number of spins increases exponentially.

By choosing the free spins, players ensure that their wins are doubled and more free spins can be won during the bonus round.

There is no specific jackpot on the basic, original version of China Shores. There are some expanded editions of the game that feature several jackpots and even progressives, but this version does not include one. However, the maximum payout is a very impressive prize regardless of its name.

The way to hit the top payout is to play the maximum bet of $15.00 and hit an entire screen of yin-yang symbols. At that point, the payout is already substantive, but by choosing the credit prize option on the Balance of Fortune screen, the maximum random payout is $159,750. 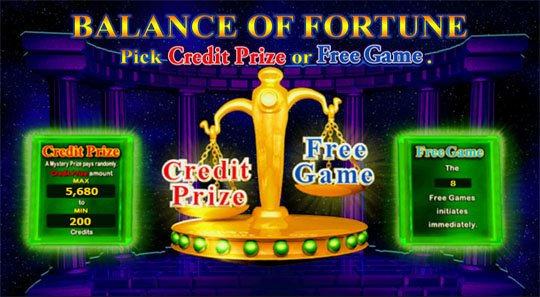 Players typically approach China Shores for its theme or wild pandas, but they continue playing for the chance to hit the Balance of Fortune bonus screen. It forces them to make a choice between a random prize and free spins, making them more invested in the outcome and wanting to try it again and again.

The panda symbols are wilds in China Shores. When a panda appears in a line that enables a payout, the panda spins and smiles. Pandas appear on the second, third, fourth, and fifth reels, and they can substitute for any symbol, even the yin-yang trigger symbols.

The black and white, round yin-yang symbols are the keys to unlocking the Balance of Fortune bonus round. They must appear on three subsequent reels, starting with the first and working its way across to the right. Three yin-yang symbols offer eight spins, symbols on four reels garner 10 spins, and all five reels offer 15 spins.

When more than one yin-yang appears in a single reel along with the format to create a bonus opportunity, that only magnifies the win. They not only offer up to 100x payouts, but extra ones also increase the number of free spins and the magnifier for the random credit prize.

The bonus round is referred to as the Balance of Fortune and appears as a scale, with the credit prize option on the left and free spins on the right. Players must choose between the randomly selected prize of credits versus the opportunity to spin and win credits that way or possibly trigger more free spins.

The greater the number of free games forfeited by choosing the credit prize, the greater that credit prize can be. Should the player win more than 20 free spins, they can spin several times and then click the scale symbol in the upper-right corner of the screen to cash out the remainder of the free spins for randomized credits. There must be more than 20 spins remaining in order to do this. 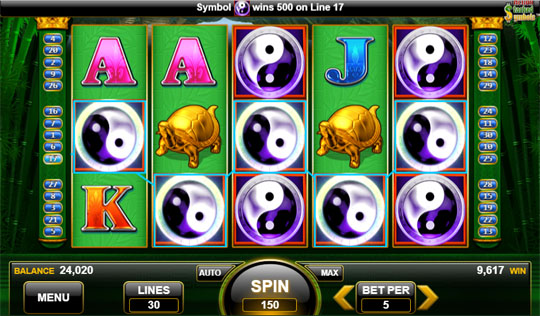 Many regular players enjoy China Shores because spins can be as low as $0.30. It is a fun game for those wanting to pass the time without spending a lot of money. But those with a penchant for taking chances, especially with higher bets, very much enjoy the opportunity to choose a credit prize or free spins.

High-rollers will like the variance in China Shores because bonus rounds aren’t as frequent as in some games but can be quite beneficial when they do hit. The potential to hit a very high credit prize is enough to keep players coming back. The panda is often seen as a lucky symbol as well, which draws players from some cultures to the game.

Konami Games also doubled down on its Chinese-themed games with China Mystery and its offshoot version, China Mystery Boosted Wins & Spins. Other similar games in the Konami collection include China Dream, China Festival, China Reels, and Lady China. All have different themes, color schemes, and gameplay, and all focus on various aspects of the Chinese culture.

Balance of Fortune: General payouts are fun, but access to the bonus round is why most players continue to spin. They then get the chance to choose between free spins and a randomly-chosen credit prize, both of which have the potential for significant payouts.

Culture and luck: Pandas as wilds represent luck, but players are also drawn to the game for its soothing themes and warm reflections on one of the world’s largest and most powerful cultures. 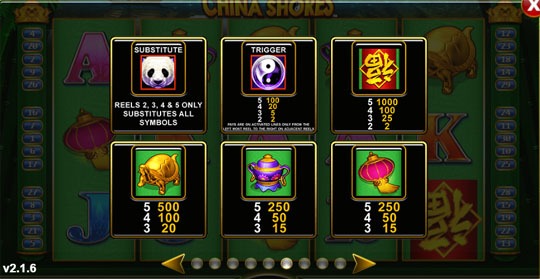 Affordable play: With spins costing anywhere between $0.30 and $15.00, the game is affordable for most players, and an erroneous hit of a maximum bet button usually won’t break the bank. The bonus round is just as likely to hit for minimum bettors as for those playing at a maximum bet.

Variety: Konami found a successful game and built on it. For more than ten years, players have grown to trust and seek out China Shores in casinos and online, which makes all the more sense that Konami created additional games with the same name. The variations of the game attract players familiar with the name but looking for better odds and jackpot-like winnings, which are offered by the many games in the China Shores family.

Lack of background music: Most games offer some type of background music, at least something subtle to break up the silence between spins and create a calm to overshadow the clicks of the reels. China Shores could use a soothing soundtrack to provide players with a more relaxed feeling.

Low RTP: With a return-to-player percentage of just over 94%, it is on the lower side, and winning doesn’t happen frequently enough to keep some players in the game.