Chili Chili Fire is one of Konami Games’ most popular slots, one that creates a Mexican theme with spicy peppers at its center. It was trademarked in 2015 and attracts players by its name and the many features it offers.

Players won’t get burned by playing Chili Chili Fire; they will find all of the free spins, wilds, and bonuses that they’ve come to expect from Konami Games. In addition, they will discover the “Fade Away” feature unique to this 3×5 reel game on the KP3+ platform.

The game is set on the streets of Mexico, filled with native men and women in traditional garb. A Mexican woman is one of the many symbols that fill the screen when playing, others being an old-style acoustic guitar, a bright blue turkey, a Mayan box of gold jewels, and a Mexican man who seems to breathe fire out of his mouth when he appears as a Wild. Of course, there are also the symbols for 9 and 10, Jack, Queen, King, and Ace.

The set of chili peppers in the shape of a heart are the prized symbols. They make an exciting sound when they appear and give players the hope of hitting enough to trigger a bonus round. When three chili peppers hit, they dance, and the player receives free spins. Unique music accompanies the spins, which can also trigger a Fade Away.

The game exclaims “Ole!” when the unique Fade Away feature is triggered and the low-denomination numbers and letters sizzle away, quickly replaced by symbols that are more likely to pay. A screen filled with colorful symbols can be a surprising and solid payday. 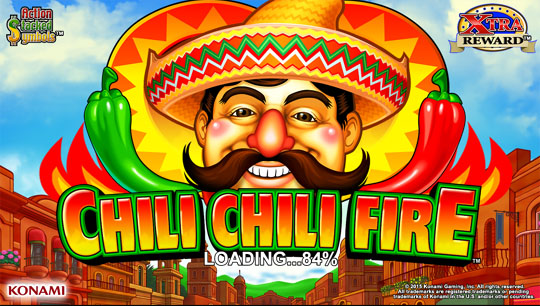 Chili Chili Fire is a 3×5 reel slot game with 30 paylines. Winning lines are selected from the left reel to the right on adjacent reels, with the exception of scatters. The highest win only pays on each line, but wins on different lines are added together.

When the chili peppers, also known as the scatters, trigger free spins, the factor that determines the free spins is the number of chili peppers that appear on the reels. For example, three chili symbols provide the player with ten free spins, four of them trigger 12 spins, and five chili peppers – one on each reel – open up 25 free spins.

There is nothing called a jackpot in Chili Chili Fire.

Maximizing the payouts while playing Chili Chili Fire consists of filling all reels with the Mexican woman symbol, which pays the most at 250 for a five-credit bet. The Mayan treasure chest pays 200-to-5 with maximum credits, the turkey – at 150-to-5, and the guitar – at 100-to-5. 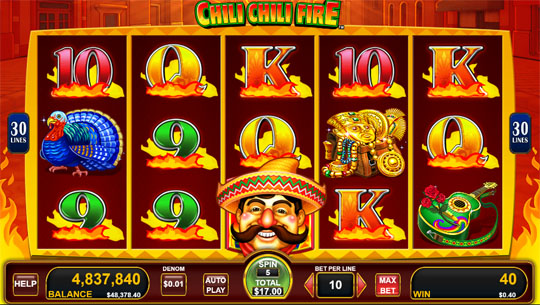 There are numerous features in Chili Chili Fire, such as wilds, scatters, and bonus rounds that consist of free spins. However, the unique Fade Away feature created especially for this game is one of the most exciting parts of playing it as it is random and can produce a wide range of results.

The Mexican man pops up as the wild symbol in Chili Chili Fire, and he can’t be missed as his face turns bright red and fire shoots out of the sides of his mouth as if about to light his mustache on fire. The wild symbols appear on the second, third, and fourth reels only, and they can substitute for anything but the scatters.

The chili peppers crossed in a heart-shaped symbol are the scatters. Three of them trigger ten free spins, four grant 12 spins, and all five launch the player into 25 free spins. In addition, three scatters produce a win of three credits, four scatters garner ten credits, and five scatters win 50 credits.

When the scatters mentioned above trigger free spins, a new screen pops up to show the spins happening separately from the previous play. A box in the center of the screen shows how many spins remain and how much money the player has won, tracking it as the spins happen.

A large payout treats the player to Mexican music and images of gold coins falling on the screen.

More free spins can be triggered while spins are already occurring, and the Fade Away feature tends to show up randomly more often than usual during free spins. 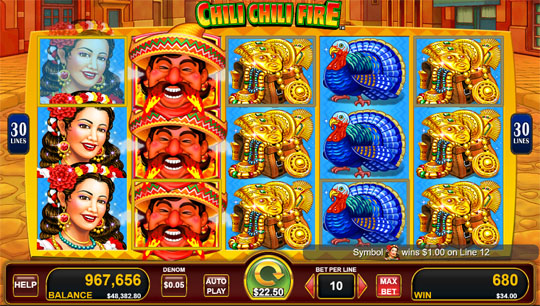 The completely random Fade Away feature can happen at any time but always awaits the settlement of a reel spin and any accompanying payout. At that point, all letters and numbers (9, 10, J, Q, K, A) sizzle and burn away, and more symbols fall into their places. Any of the new symbols that happen to be letters or numbers sizzle and burn again until all reels show higher-valued symbols. Next, the player is awarded the Fade Away payout, and play returns to normal.

Players of all bankrolls should enjoy Chili Chili Fire, but the lack of a specific jackpot may keep some players away. However, those who discover the Fade Away feature will enjoy waiting for it and playing until they hit a big payout, which is especially likely during free spins.

High-dollar slots players should enjoy the wealth of betting options, especially the very high maximum bet when playing at the higher denominations and maximum bets per line. Payouts can be significant with increased betting.

The most glaringly similar game in the Konami Games collection is Jumpin’ Jalapenos with its Mexican cowboy in the featured role and symbols like chili peppers and guitars.

Mayan Chief is another Konami selection in the same category, with a focus on a pyramid of jewels.

Neither of these games includes the Fade Away feature, but both are centered around free spins and the wild symbols that can increase payouts significantly. 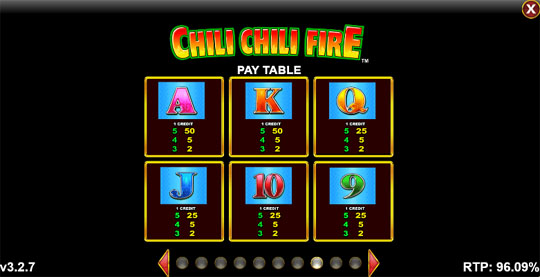 Free spins and Fade Away: The free spins are the primary way to win big, especially due to the increased chances of hitting the Fade Away feature, which burns away low-value symbols in favor of ones higher up on the paytable, giving players the best chances to claim an impressive prize.

Fun theme: The Mexican theme and matching Action Stacked-branded symbols are bright and add excitement to every spin, especially the wild symbols and chili pepper scatters that come with their own animated actions. The music fits with the game perfectly and is broken up by Fade Away and free spins.

Betting range: Players with any budget should find a denomination that suits them. Playing at the $0.01 level, the maximum bet is $4.50, while high rollers can play up to $450.00 per spin.

Name recognition: Konami’s reputation for quality products spans decades. The Japan-based company has offices around the world, including Nevada. With a library filled with hundreds of games, Konami is one of the industry’s leaders in producing top-of-the-line slots for players with a variety of interests.

No jackpot feature: While there are significant payouts for Chili Chili Fire players, there is no big jackpot or a feature that lets the player know they won the game.

Too many betting choices: Players want choices, but the wide range of denominations can be confusing and prompt lines to form when too many people want to play the same game. Players can also feel that they are not winning much if they don’t play the maximum denominations.