IGT has been making online slots for nearly 20 years. Today, they are a global supplier and operate across 100 countries.

However, this slot might not be the feline theme you were expecting. There are no domestic cats to be found here. This slot goes all-out on the wild theme, with such icons as:

Standard playing card symbols make up the rest of the icons (jacks, queens, and kings). Unlike in some other titles, they aren’t adapted to the theme at all.

Cats looks decent overall, but it doesn’t have as many animated segments on its main reels as some of its competitor slots. The bonus round features a nice intro animation, however.

The music is a fairly standard, futuristic slot score, but it is done better than many. We’re not convinced it fits well with the big-cat theme, but it’s more than passable for listening.

The sound effects added a nice touch too, with a different growling or roaring sound for each of the big-cat icons. 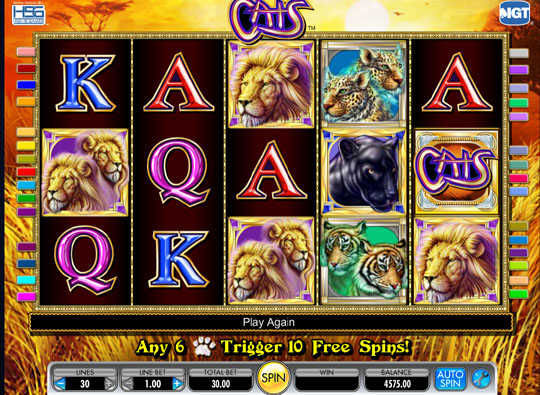 You can choose to bet on only one line, giving a minimum bet of $0.01. This game is perfect for penny-slots players.
While this is a good bet range, the highest rollers might be disappointed it cuts off at $300 a spin; not at $400 like some other IGT slots.

The top prize available here on a standard bet is the fixed $10,000 when you pull five wilds in one line. While not a small-fry prize, this isn’t as much as you’d get for pulling five wilds on some other titles.

One of Cats’ main draws are the auto spins and line customization features. These two options are always going to be appreciated by more-experienced slots players.

You can tailor the game to the way you like to play it, which opens the game up to those with differing budgets.

Lastly, the return-to-player (RTP) of this slot is 94.93%, which is a respectable rate. However, it is not the best RTP you’ll find in an IGT slot.

Cats does not offer a big-money jackpot. Big split-symbol pulls can offer you relatively high prizes at the maximum bet, but this doesn’t make up for the lack of a designated prize.

Slots need a jackpot to be truly competitive for your attention in today’s market, and Cats is lacking in this score. 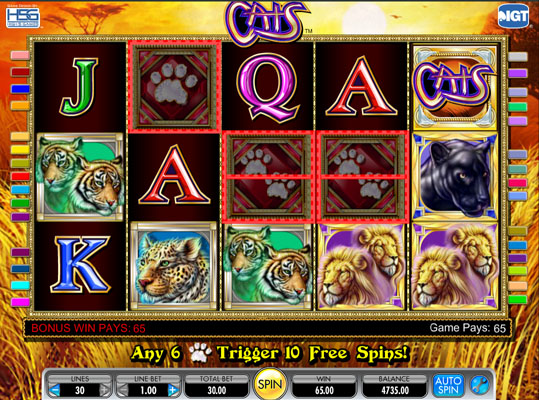 Cats features a wide variety of symbols and scatter symbols but only one bonus round. There’s a decent amount of depth here, but it can’t stand up to IGT’s top-tier titles when it comes to their range of extras.

There’s only one wild symbol, which is the Cats logo. It functions as a standard wild symbol, and substitutes for any symbol to make a winning line.

In the case of two symbols fitting the bill to make a win, Cats’ wild symbol takes the higher-paying option.

When the wild symbol replaces one of the big-cat icons, it automatically becomes a split symbol. This means it counts as two symbols when calculating a win.

Cats offers 12 different scatter icons. Bear with us – it’s not as complicated as it sounds.

Every one of the five big-cat icons has its own split symbol equivalent that depicts two cats instead. These count as two symbols for purposes of a winning line.

That means you can potentially pull ten of the same symbol on one winning line, unlocking the possibility for big wins.

The last scatter symbols are the pawprint and split-pawprint icons. As with the big-cat icons, split pawprints count as two when making a winning line.

Pull four or more anywhere on the reels after one spin to unlock the following: 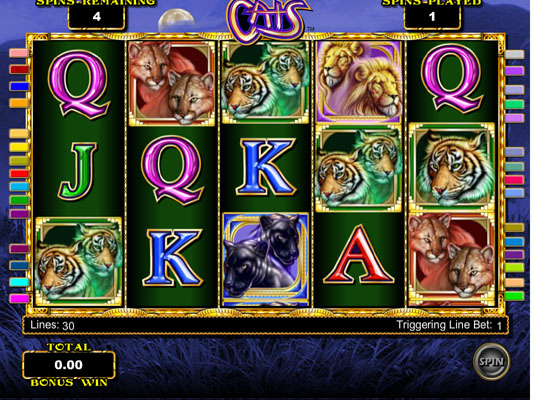 This consists of either five or ten free spins on a separate set of reels, which feature the same symbols minus the pawprints and split pawprints.

This means that free spins rounds cannot be extended by pulling more during your run.

Each free spin is played with the same number of paylines and bets per line that you were using when you activated the bonus.

The Cats slot should appeal to more advanced players looking to change things up with some different mechanics. The split-symbol system certainly offers that, along with your ability to change bet lines and the auto spin functionality.

However, more serious players may expect a dedicated jackpot and more than one bonus round. A $300 maximum bet is also lower than the $400 limit found of some of IGT’s (and their competitor’s) titles.

Alternatively, if you’re more of a dog person, Coyote Moon or Wolf Rising might be more suitable to your tastes.

Unique split-symbols mechanic: It’s always nice to see something different on a slot, and Cats has succeeded admirably on this point. The ability to get up to ten of any symbol on one winning line makes for an attractive prospect. 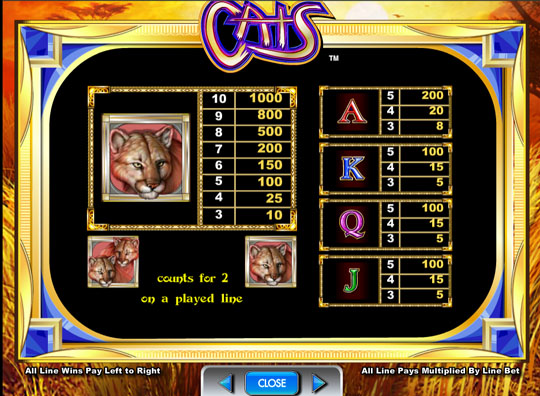 Custom paylines & auto spins: Cats allows you the option to bet on as little as one central line. Winning lines are clearly displayed, overlaying the reels when pulled. The lines are also displayed when you change the number of them on which you are betting.

This system gives enviable clarity to Cats’ line structure and should be helpful for new and experienced players alike. It is also used by a fair number of IGT’s other slots.

No jackpots: This is a cardinal sin in today’s slots environment. The potential for bigger wins off split symbols doesn’t really make up for it.

Only one bonus round: As much as simplicity is laudable, having only one bonus round won’t offer enough depth for most players. It’s also a fairly simple free spins bonus, with only the split-symbol mechanic distinguishing it from any other slot bonus round.