Cash Wizard is a magic-themed slot from Bally, part of the Scientific Games family. The game has been a staple of land-based casinos across the United States for many years, with Bally only releasing it for online and mobile audiences in 2012.

In a break from the Gandalf-esque tradition of wizards with glasses and long, flowy, white beards, Bally’s Cash Wizard is a round-headed cartoon figure with a simple smile. The pointy hat and beard are still present though, along with 30 bet lines, a bunch of special symbols, and a mystery wheel jackpot.

Despite the relatively low-tech look of its eponymous character, Bally pulled out all the stops on Cash Wizard. The voice lines, especially when you spin a bonus potion, are extremely well-acted and help bring the character of this game to life.

The music is great too, but – as with many slot game soundtracks – it does start to jar after repeated listens. The music is broken up with unique jingles when some effects are triggered, though.

As well as the ever-present Cash Wizard waving his wand over proceedings, a rather harmless-looking dragon also crosses the lines to indicate a win after a successful spin. The icons look nice without being particularly inventive. They cover a variety of playing card symbols (nines, tens, jacks, queens, kings, and aces), red and green gems, and the wild and bonus symbols.

Cash Wizard also comes with a few nice graphical interludes for its bonuses. Pulling a potion symbol on the first three reels unlocks a potion bonus mini-game, which looks and sounds enchanting with the Cash Wizard explaining how your bonus works.

Another is when the Cash Wizard appears at the side of the screen and throws a few wild signs into the mix. The music turns into a flight-of-the-bumblebees-style manic crescendo as wild symbols fly across the screen, which makes for an enjoyable intermission.

Cash Wizard includes five reels and 30 lines. The lines are fixed in number, but the minimum bet can be adjusted between $0.01 and $0.50 per spin, which is great for penny-slots fans. Alternatively, bets can be set as high as $8 a line or $400 per spin.

Auto spin options are not available on Cash Wizard, which is a big negative. Any free spins won on the mystery wheel or through normal play run through on auto spin, however.

The return-to-player (RTP) is a relatively low 94%. Non-jackpot or bonus prizes can go as high as $40,000 when you match five wild symbols. They are substantially lower than that (between $500 and $10,000) for all the other symbols. The paytable also automatically updates based on your current stake, which is a convenient feature. 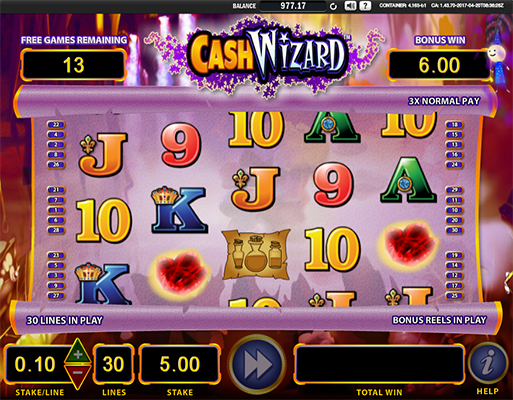 There are three jackpots available when playing Cash Wizard, and they all come from the mystery wheel. These are all scaling and currently sit at:

The mystery wheel is triggered at random. To illustrate, we pulled it three times in about an hour of playtime during our testing for this review. Unfortunately, we didn’t win the jackpot. The other prizes are various multipliers of your stake (starting at 100x and going up to 1500x) and between five and 20 free spins.

Cash Wizard may not offer the highest jackpots, but it certainly includes a more-than-decent selection of bonuses compared to many slot games.

The wild symbols do not offer any additional functionality. They are standard slot game wilds that can substitute for any symbol to create a winning line.

You will only see the invisible ink on reel three, and it gives between 2x and 20x your stake as a bonus whenever it appears.

Free games are just free spins with a different name. If you pull more than one of them on reels two to four, you trigger fifteen free spins. Each spin carries a 3x stake bonus added to any wins. You can win more free spins during a free game round, extending your bonus.

You trigger the potions only when you pull all three on the first three reels. They launch a mini-game and grant an automatic reward of 10x your stake. 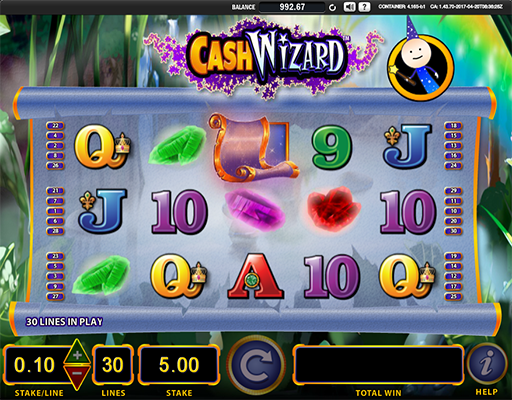 There are two bonus rounds offered by the Cash Wizard. They are:

You can trigger the wheel randomly at the end of a spin if no other bonus or scatter has been activated. It offers three jackpots that will award you between five and 20 free spins and up to 1500x your stake per line. Just click the cutesy Cash Wizard to make him wave his wand and stop the wheel.

The mystery potions feature opens a scroll-like screen that displays a range of potion bottles. Click each one to reveal what’s inside – hopefully, cash bonuses. All seven could be prizes, or all seven could be cursed potions. Choose one of the unlucky concoctions and your bonus adventure will end there. However, you always keep the 10x per line stake bonus you get for simply triggering the game.

Unlock all seven without getting a cursed bottle and you’ll not only keep all seven cumulative bonuses but also win an extra 100x your stake per line.

Based on the low threshold for bets, Cash Wizard should appeal to low-budget, penny-slots players and less-serious slots fans. There are a lot of bonus interactions and scatter symbols, keeping gameplay exciting, but it lacks the truly huge potential payouts of the big-money, progressive jackpots from Bally’s competitors.

Although there’s a lot of charm here, the lack of advanced options, line settings, or auto spins will put off the most hardcore slots fans. Lastly, the low-budget design style of the main character’s animation may be a negative for some, even though it was clearly made that way on purpose.

Some similar, fantasy-styled slot games from Bally include Jewel of the Dragon, Acorn Pixie, and Dragon Spin.

The dragons in Dragon Spin visually triumph over the rather limp and unintimidating dragon companion in Cash Wizard. As the star of the show, the dragons also get their own video intros and fancy animations, which are superior as well.

On the other hand, art styles in slots are highly subjective, so you may prefer the simple stylings of Cash Wizard. Regardless, all three of these games are also five-reel, 30-line slots.

Lastly, we should mention that Cash Wizard features the lowest bet options of them all and the clearest representation of the 30 lines available. 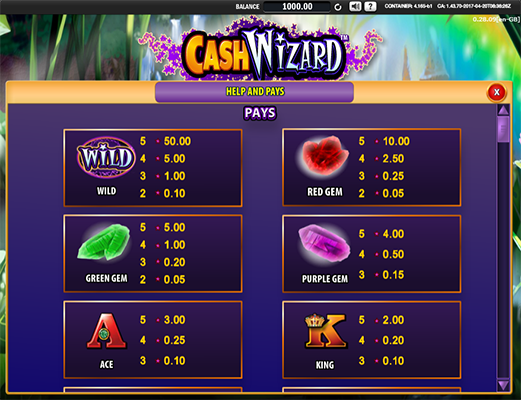 Lots of bonus features: Compared to some slot games we’ve experienced, Cash Wizard has a strong selection of extra rounds and random bonus features to keep things interesting. The potions mini-game was also intriguing and added an extra dimension to the usual spinning-reels gameplay.

Clear presentation: The updating paytable and the clearly set out lines make this game a cinch to play. The bonus rounds are also succinctly described and make good use of the fantasy-themed voice lines.

Low bets: The ability to have full scaling on your bets per line, down to as low as $0.01, is a real draw for penny-slots players.

Relatively low jackpots: The scaling jackpots are not high at all and do not approach the massive, progressive jackpots you might find in top-tier Microgaming slots, for example.

No setting lines or auto spins: This was a big deal for us and will be for many players, too. Dedicated players will especially miss the auto spins. Customization is important in any modern slot game that wants to be on top. There just wasn’t enough here.

Divisive graphics: The graphics are liable to turn off some people, but we personally enjoyed the strangely low-tech Cash Wizard with his simplistic features. However, we understand this style might not be for everyone.